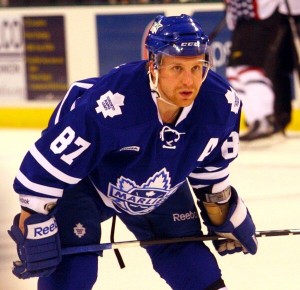 Eight games into this shortened NHL season, the Toronto Maple Leafs are wondering if they have their version of a pest in Leo Komarov.  As of now, he leads the league in hits with 33 hits, one more than Emelin in Montreal and Luke Schenn in Philadelphia.

He has been a regular so far this year, and if he continues to play this way for coach Randy Carlyle, he will continue to get a lot of ice-time.

The Fans haven’t bought in 100% yet, but when they realize that this is the Leafs’ answer to Steve Ott, Jordin Tootoo & Brad Marchand, they’ll buy in.

This is the reason why the #leafs like Leo Komarov. He is a hitting machine.

Watching the game last night, it occured to me that I could help the fans buy into Leo Komarov and what he brings to the team by adding a twist to watching him play.  So I propose a Leo Komarov drinking game in which viewers take a swig of whatever it is that they fancy, each and every time that Komarov lays the body.  It shouldn’t take very long.

As you can tell by this clip, Komarov doesn’t drop the gloves a lot, but he isn’t afraid to.  The way that he plays the game will result in fisticuffs from time to time.  Have a look:

Although the Leafs succumbed in the end to the Boston Bruins on this cold February night, it was enjoyable to watch the 47 Train cruise around the ice and slam into defenders on the opposing side of the ice.

Komarov led both teams with six hits and helped his team to a 44-29 edge over the Big Bad Bruins.  The best part is that he accomplished this in thirteen minutes which is roughly his average.

In the KHL and AHL  Komarov has shown that he can kills penalties which he has also done with the Maple Leafs. Although he hasn’t shown an offensive flare at this level, with just one point in eight games, he has shown that he can make room on the ice for his linemates Kadri and Frattin, both of whom are among the leaders on the team in points.

Here is a glimpse of his hitting ability but I warn you that having Craig Simpson disect the play can be painful to listen to if you’re a Bruins fan.

Leo Komarov going off boarding 1:45 into the third. Chara gets called for roughing. 4-on-4 hockey….^CS

Although this is a hit that resulted in a penalty, it gives you a glimpse into the type of player that he is and how he can get under the opposition’s skin.  This tweet should read:

These two minutes were his first two off the season.  Certainly  there wasn’t doubt that the hit on Johnny Boychuk was questionable, but miraculously Komarov was able to draw the unfriendly giant Zdeno Chara into a penalty of his own.  The end result was that his two minutes didn’t cause his team to be shorthanded.

When trying to assess the Komarov situation, this tweet sums it up perfectly:

The Komarov game is back on Monday night as the Leafs take on the Carolina Hurricanes.

7 Predictions for the 2021 World Junior Championship