Another year and another early playoff exit leave Blues fans in the familiar situation of second-guessing everything about the organization from the GM to the coach to the “core” players’ hearts. Will changes be made? Undoubtedly. Will they happen soon? Unlikely. Will they satisfy Blues fans and lead the team to success next season? Only time will tell. My opinions aren’t always popular and I’m pretty disgusted with the team right now, but I’m already looking forward to next season.

It’s Not The Coaching

I didn’t agree with everything Ken Hitchcock did while coaching the St. Louis Blues but it’s tough doubting one of the winningest coaches in NHL history. While I believe Hitch’s system works (at least in the regular season) the players appeared to quit on it at times and run out of gas in the playoffs. His propensity to change the lines from shift to shift and game to game was maddening and his refusal to sit underperforming veterans drove Blues fans crazy. 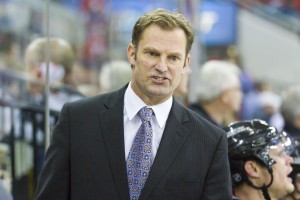 The Blues learned a lot of good hockey from Hitch but I believe it’s time for the oldest head coach in the league to move on. St. Louis needs to find a coach who is going to fire up the veterans while empowering the youngsters we’ll likely see on the roster next season. While his name is being thrown around a lot, Dan Bylsma is NOT who I see as a fit for this team but as long as it’s not Todd McClellan I’ll probably be fine with whoever they end up installing behind the bench. I wouldn’t mind seeing Kirk Muller taking over permanently. I think he can relate to the players and is young enough to stick for the long-term.

With the trade of Roman Polak for Carl Gunnarsson the Blues made a conscious effort to improve puck movement on the back side but the resulting lack of toughness & aggressiveness on the St. Louis blue line plagued the defense from day one. In the early stages even Alex Pietrangelo’s play suffered and I believe it’s because of the added emphasis on offense. That the Blues *did* have success the regular season was a result of forwards consistently back-checking MUCH more so than the defense playing well.

The Blues enjoyed success when they moved the puck quickly, made crisp passes and created space for their forwards who they also relied on to shore up the defense. While not an unrealistic expectation their inability to maintain the “200-foot game” over 60 minutes every night ultimately cost St. Louis and I’m not sure this is a condemnation of the system or if the players just couldn’t handle it. Blues fans saw the team make the same mistakes night after night.

If you go back and look at all the losses this year, regular season AND playoffs, you can never say “Man, I just can’t figure out why they lost!” Nope, it was ALWAYS the same reasons, EVERY time. Soft back-checking, dumb, often blind, behind the back passes, giving up odd-man rushes that hung their goaltending out to dry and failure to play a full game is no recipe for wining the Stanley Cup.

Finishing with 100+ points and home ice advantage means nothing if you can’t perform on the bigger stage. After three seasons of regular season winning followed by early playoff exits you can bet the coaching staff and roster will have a different look in 2015-16.

Of the players on the roster for the annual first-round bow-out, many are free agents now and I don’t think they’ll be back with the Blues next season. GM Doug Armstrong has made it clear to Blues fans that signing Vladimir Tarasenko is Priority Number One and it should be, but the money it will take to lock him up will dictate what happens to the rest of the departing players.

Aside from Tarasenko, I’d definitely like to see Jake Allen and Robert Bortuzzo back in St. Louis with multiple year contracts. I can see Ty Rattie back with a two-way deal unless he’s perhaps packaged in a trade. Chris Porter and Chris Butler may end up salary cap casualties. Other pending free agents I would just as soon not see back include Zbynek Michalek, Olli Jokinen and Marcel Goc.

A good portion of the Blues “core” is signed for the next 1-4 years. The guys who should be leading this team next year are defensemen like Petro and Kevin Shattenkirk, and forwards such as Paul Stastny, Jaden Schwartz and Jori Lehtera. Blues fans will also see Ryan Reaves and Dmitrij Jaskin right there in the mix. One guy who’s been there his entire career may have worn the Bluenote for the last time as Barret Jackman is now a free agent. Blues fans seem torn on whether he should be back, but I think Jax’s desire is clear.

Armstrong won’t be afraid to make changes where necessary (assuming he’s not one of them, depending on Tom Stillman’s mindset once everyone’s had time to fully digest the repeat offense of failure.) Some of those may include trading away the likes of David Backes, T.J. Oshie, Alexander Steen, Jay Bouwmeester, Gunnarsson, and Patrik Berglund. Many Blues fans want the roster blown up because they’re tired of perennial, pathetic playoff performances by that group.

Money and No-Trade clauses will absolutely have an effect on what moves can be made. Some of those guys under carry large salary cap hits other teams may not be interested in taking on. Additionally, goalie Brian Elliott may very well ask for a trade out of St. Louis and I wouldn’t blame him, though he’s signed too and could just as easily end up the Blues starter, in theory, again.  St. Louis is relatively thin at the position behind Ells and Allen.

Unlike some Blues fans, I’m not saying the management team needs to do anything immediately. It’s not realistic nor is it very responsible. Their job shouldn’t be to appease fans’ cries for anyone’s head but in giving a very subdued and scripted press conference this week St. Louis is left with more questions than answers about the team.

WHY is Vladimir Sobotka’s name being mentioned right now?? He had NOTHING to do with this season’s results and isn’t going to be a difference maker on this roster. Sure, the Blues hold his rights and it could play into trade scenarios or free agent signing needs IF he choses to come back to the NHL, but fact is NO ON should care what he’s doing right now. He’s neither part of the problem or the solution.

Hitchcock may indeed decide to retire which, based on what he said during the presser is probably for the best. He sounded weary and emotionally drained, which is to be expected but isn’t the kind of leadership this team needs. He gave everything he had and the players couldn’t take it to the next level. Whether it’s to retirement or to coach the Edmonton Oilers, I think he needs to move on.

Not all is doom and gloom for the future. The St. Louis Blues have stars in the making in AHL forwards Robby Fabbri and Ivan Barbashev. Defenseman Petteri Lindbohm is going to challenge for a roster spot come training camp. Whatever happens this summer with the coaching and the “core,” Blues fans will be back in September ready and willing to Bleed Blue once again.