Given the increase of the cap ceiling from the original $39 million in its inaugural season, salaries had to be prorated to the current $75 million cap ceiling in order to include current roster players.

Each player’s highest cap hit as a Bruin from 2005 to the present day was converted into the percentage of the salary cap said player cost during the season with the highest cap ceiling. That percentage was then carried over into the current $75-million cap ceiling to determine the player’s cap hit in 2017-18. 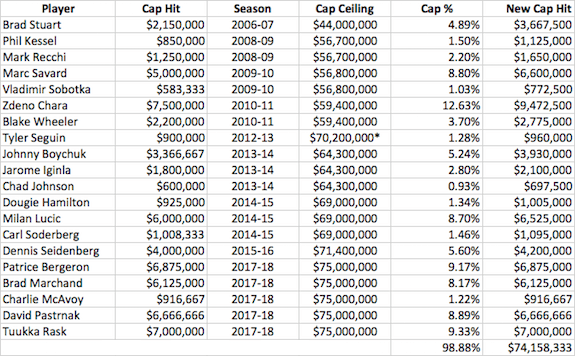 Percentages were rounded to the nearest hundredth to keep numbers cleaner. All players skating in the current season were calculated outright. During the 2012-13 lockout-shortened season, the salary cap was prorated to allow teams to spend $70.2 million towards the cap ceiling.*

Some fan favorites, a handful of trade victims and a couple of franchise cornerstones come together to create an enviable forward group in Boston. Only three remain on the current roster. Some were easy choices as low cap hits or regular linemates on one of the best forward units in the NHL over the past two seasons.

This team was crafted from the backend first, but the ability to throw this trio together after the way they’ve dominated both sides of the ice over the past two years was worth the price. Honestly, they’re rather a bargain than a burden.

A premier two-way center in Bergeron, a remarkably skilled winger and one of the best scorers in the game come together to create a line with three 30-goal scorers that all have 80-point potential. If they don’t have the puck, it’s only because they’re on the bench.

Savard was a dominant scorer during his prime and amassed a whopping 262 points (62 goals, 200 assists) in 238 games during his first three years with Boston. His career was cut short following multiple concussions, but he rightfully has a spot on this team.

Being flanked by one of the best shots in the league in Kessel and a gritty, power-forward in Wheeler would have Savard flirting with triple-digit assists in a single season. Kessel and Wheeler both posted career years this season with 92 and 91 points, respectively. As a second line, the talent would just be too much to match.

Lucic hits. Seguin scores. Iginla does both. It would be the perfect blend of what makes a successful line, one that brings it every night, even if it doesn’t show on the scoresheet. A premier faceoff guy with positive possession wingers is a recipe for success.

Seguin’s speed, elite skill and offensive instinct would be the driving force for two wingers that crash the net. Lucic doesn’t give up the puck easily, and Iginla’s pure goal-scoring shot would help them flourish against any opponent.

Related: Tyler Seguin Is the Bruin That Got Away

They may not match the name power of those around them, but sacrifices have to be made. That doesn’t mean this fourth line wouldn’t work out. Recchi is the offensive force behind this line and even after the age of 40, remained a scoring winger as he finished his career in Boston.

Nobody thinks about Sobotka as a Bruin, but it’s where he got his start as the defensive center bottom lines demand. Meanwhile Soderberg’s smooth takeaway skills and Recchi’s offensive instincts would help them drive play up the ice.

As if the dominant forwards weren’t enough, Boston’s blue line is a mixture of defensive stalwarts and offense to match. It’s incredible to think four of these guys played together just four seasons ago.

Chara isn’t as mobile as he once was, but he continues to be the consummate leader and a stabilizing presence for his team. The former Norris Trophy winner was paired with a rookie Hamilton in 2011-12, where the Bruins saw him as Chara’s eventual heir.

Chara helped Hamilton develop quickly, which drove up his price and found him traded to Calgary in 2015. He has taken the next step (several, actually) since the trade and is as reliable defensively as he is offensively. A reunion would certainly be this team’s top pair.

Seidenberg was never one to drive play or add a ton of points, but he sacrificed the body every game and repeatedly found himself with a positive defensive rating. He would be a great mentor to the young McAvoy.

And as McAvoy learns how to play the body, block shots and better his defensive positioning, he would add the natural offense he has shown in his solid rookie campaign. He didn’t just make the team because of his entry-level contract, but it was a plus.

It’s funny to think Stuart made it on both of Detroit’s and Boston’s all-time cap teams, but he also earned each spot. His reliable defensive game and ability to chip in offense makes him a perfect bottom-pair player.

Add in Boychuk, who plays a similar game, and the pair would be an elite shutdown unit that can quickly move the puck up the ice as they get handed the bulk of defensive zone shifts.

The starting job was a tough choice, not due to a lack of options, but having to choose just one of two former teammates that raised the Stanley Cup together in 2011.

Rask comes in a shade under a million dollars cheaper than Tim Thomas, but that’s hardly the only reason for him beating out his former teammate. He has posted at least 30 wins in each of his five seasons as the No. 1 netminder and claimed the 2014 Vezina Trophy.