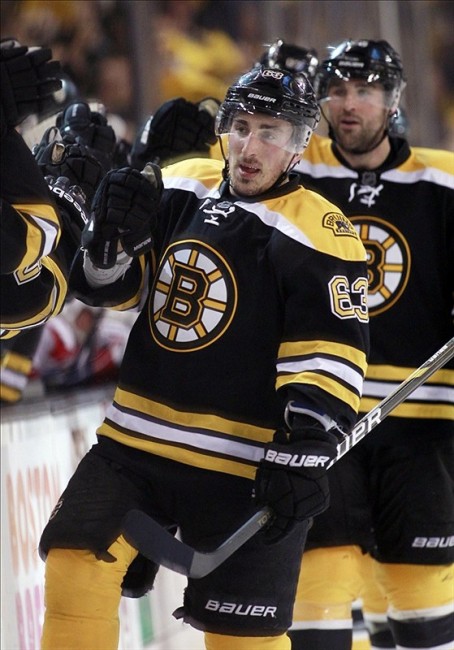 Friday, the Boston Bruins announced the signing of forward Brad Marchand to a new four-year extension. The deal will pay the dynamic two-way winger $18 million in total and $4.5 million per season.

While some may criticize the sum, it’s a fair total for such a young, accomplished forward. His performance during the 2011 Stanley Cup playoffs – particularly the Finals – would have been Conn Smythe worthy some years. Despite his stature, the 5’9 winger plays a rugged, 200-foot game with plenty of determination.

Marchand (along with his linemates Patrice Bergeron and Tyler Seguin) finished last season among the top-five in the game in plus/minus rating. Marchand’s defensive game is very well-developed and the forward consistently receives time on the penalty kill.

A creative scorer effective both as a distributor and a shooter, Marchand’s per-game scoring rates in the past two seasons justify his top-six status. Averaging a prorated 26 goals and 52 points per 82 games since the ’10-’11 season (a near first-line-rate), the ‘Nose-Face Killah’ earned a significant raise over his current two-year, five million dollar deal.

While last season’s lofty 16.8% shooting rate will be difficult to replicate, Marchand could see increased even-strength and powerplay minutes with the Bruins currently established first-line. In 2011-12 he accrued just six powerplay points – a low total for a scoring-line forward. More man-advantage production should be expected from him down the line.

As he matures, the diminutive agitator could become even more valuable. Marchand’s prime is still a few years away. Though a massive jump in production isn’t likely, thirty goals and sixty points are goals well within reach for the feisty Bruin.

If a ‘salary rollback’ comes with the new CBA the deal will look that much better. However, even without such a courtesy, the Bruins made out well with this contract.

Why? …Because there’s a very good chance that Marchand will live up to the terms, and a decent chance his performance could push it into the realm of a ‘steal’. I expect him to score twenty-plus and push sixty points each of those years – all while playing excellent defensive hockey.

Almost seventy forwards will make $4.5 million or more in one of the next two seasons. That might make it seem like the B’s paid Marchand first-line money – but when you consider the first-liners playing out their ELC’s and those on long-term deals (or just simply well below market-value), the numbers aren’t so bad.

In reality, Marchand is getting paid like an elite second-liner. His ’11-’12 output (among forwards, finishing 69th in points and 36th in goals) lends credence to the possibility of continued first-line production.

The only real trepidation resulting from this deal lies with the Bruins 2013 cap crunch. With another $4.5 million accounted for – and Seguin, Milan Lucic, Nathan Horton, Tuukka Rask and Andy Ference still unsigned – the forecast is grim. Unless the NHL and NHLPA reach a very favorable resolution to the CBA negotiations, one or more of those players could be gone.

But the CBA’s uncertainty should happily forestall any uncertainty surrounding the Bruins future cap plight, keeping the focus on the talented winger who’ll be with Boston for five more seasons.