As someone who’s been playing National Hockey League video games for many years, the latest and greatest upgrades to the NHL series always seem to attract my interest. This year, there are multiple additions to newest addition of the series, NHL 13.

The very first hockey video game released by EA Sports was aptly called NHL Hockey, and was released for the Sega Genesis console. That game featured goaltender Kelly Hrudey on the cover, who at the time was a goaltender for the Los Angeles Kings. This year, the game is available to play on both the PS3 and Xbox 360, as it has been since NHL 08. 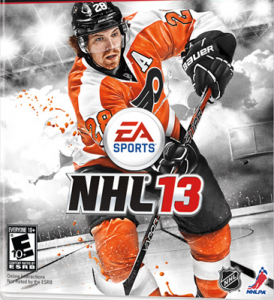 Claude Giroux of the Philadelphia Flyers was voted in as this year’s cover boy after beating out netminder Pekka Rinne of the Nashville Predators in the final-round of fan-voting. Giroux established himself as a NHL star during the 2012 playoffs, putting up a fantastic performance against the Pittsburgh Penguins in the first-round.

Over the last few years, some of the most popular additions to the NHL series have been the Be a Pro, Hockey Ultimate Team, and the EA Sports Hockey League modes. Each year since, the EA Sports production crew has worked on fixing details, improving performance, and upgrading each of those modes.

In NHL 11, the Canadian Hockey League – which features many of hockey’s upcoming stars – was introduced to fans through gaming for the first time. Including the three leagues which make up the CHL was a big step forward for the NHL Series, and it has allowed users to take their hockey gaming experience to the next level (literally).

Sean Ramjagsingh, the now well-known producer of NHL 13, has made it know that the fans are important, and that fulfilling their wishes is a high priority.

“We get feedback from fans on what they’re loving and what they want more of. And it’s our job, as producers, to understand what’s going on in the industry and look for that next feature to really raise the bar,” said Ramjagsingh in a Montreal Gazette article.

This year, all the hype suggests the bar has been raised like never before. There’s the brand new True Peformance Skating, which features over a thousand animations, many of which have never been part of a video game. Artificial intelligence (also known as A.I.) has been upgraded so that each and every player on the ice now reacts according to the actions of those around them. The presentation of the game has been given a little face-lift, as lighting and player faces will now be more realistic than ever. On top of those new features, there’s also NHL Moments Live, which allows the user to “relive history” by replaying some of the most historic moments in today’s game.

Take a look at what NHL 13 will bring to the table by watching the video below. Ben Ross, NHL 13 Gameplay Producer, describes some of the new features, and walks the viewer through some gameplay action.

As you can see in the clip above, the producers have made some big changes to the game this year.

“We took out all the old skating animation and rebuilt it from the ground up,” Ramjagsingh said. “The system focuses on explosiveness: guys who can see a gap and get there right away. The guys with top-end speed feel really fast while you’re playing.”

Perhaps the most anticipated addition to this year’s game is the GM Connected mode. The GM mode has typically been the franchise’s most popular since it was introduced. Now, it’s stepping it up a notch and moving to the next level. Gamers can now create their own controlled league with thirty human-controlled teams. At it’s maximum, 750 players could potentially participate in one single league. It will allow users from across the globe to work together to achieve video game glory. There will also be a mobile application introduced in the near future to give hardcore users the opportunity to follow their league and team, no matter where they are.

“You can play the 1-3-1 Tampa used against Philly,” Ramjagsingh said in the same Montreal Gazette article. “Or you can be extremely aggressive on your forecheck, like the L.A. Kings were in the final. It’s up to you to customize your game.”

Much like the fan below, many people on Twitter are pretty pumped for this game to come out. Not everyone can survive their NHL craving with a simple demo version; as EA Sports would say, “It’s In The Game.”

“Expectations are huge, every single year,” Ramjagsingh said. “Every day we’re not working on the next version is a day we’re losing.”

The heavily anticipated release is coming up fast. NHL 13 hits shelves on September 11.

4 thoughts on “NHL 13: Will It Be The Best Hockey Video Game Ever?”