Ten days ago, the Boston Bruins were in denial of what had happened to them two nights prior.

You're telling me the #Bruins lost 9-2 to the Kings ? Ouch

A 9-2 defeat at the hands of the Los Angeles Kings was not the ideal impression to leave before embarking on a season-long six-game road trip. Fans were crying for general manager to sell off their assets and retool for next season. Negativity filled the air as people repeatedly smashed the panic button, calling for heads to roll.

Nearly two weeks later, the Bruins come home off the heels of a 4-2 road trip, sitting in second place of the Atlantic Division and five points back of the Florida Panthers for top spot. Boston’s six games on the trip were filled with a little bit of everything from Patrice Bergeron playing pugilist in Winnipeg, an 11-goal thriller in Detroit, a rousing comeback and a few milestones thrown in for good measure.

Here are some of the things we learned from the Bruins’ recent excursions on the road.

It took 48 hours for the B’s to put their embarrassing loss to LA in the rearview mirror.

Their trip to Winnipeg had it all. Six goals, three fights and 34 saves from Tuukka Rask were the catalyst of a 6-2 victory at the MTS Centre to kick off their road trip in style. After facing serious criticism from back home about their sieve-like defense against the Kings two nights prior, it appeared the floodgates may open again after the Jets racked up 18 shots and two goals in the first 20 minutes.

From then on, the Bruins stabilized their defense and showed their mettle, culminating in something that has been seen only a handful of times. A fight from Bergeron. 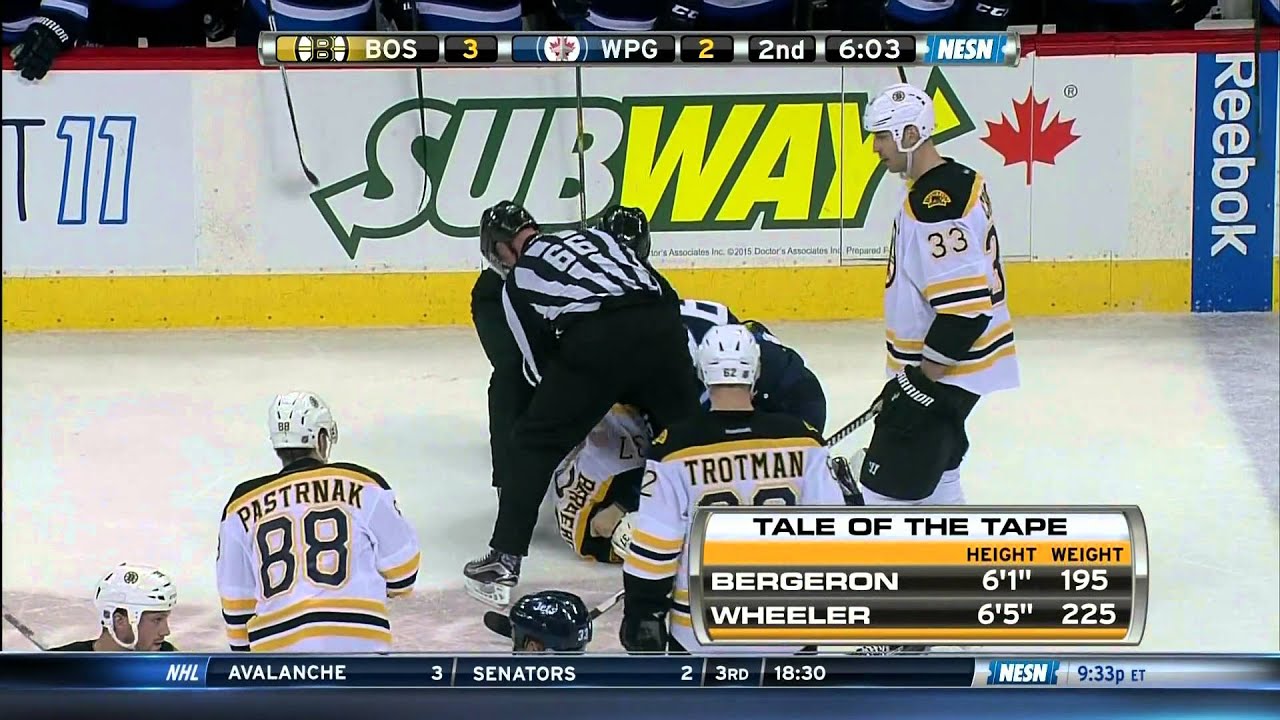 That’s when you know the desperation level is where it should be when a three-time Selke Trophy winner is dropping the mitts. Three third-period goals put the game (and points) firmly in Boston’s grasp. It was a swift response after being torched by the Kings and a good way to start a very critical road trip.

Beating The Teams You’re Supposed To

Staying on the theme of winning, the Bruins did just that when it came to teams below the playoff line.

Three of Boston’s four victories on the trip came against teams that are outside of the playoff structure. Victories in Winnipeg, Minnesota and Columbus were especially important given the tight-knit Eastern Conference playoff race. Yeah those victories don’t really carry much in the way of swinging the pendulum of opinion on Claude Julien’s squad but they’re still critical points to deposit in the bank.

Boston has done exactly what they needed to do to keep themselves very much in the hunt to this point. Of their 32 wins this season, 20 of them have come against non-playoff teams. Especially with the way the conference is trending down the stretch, every single point could be the difference between making the postseason and missing out, which is not an option for the Bruins after last season.

Following their 2-0 loss in Nashville on Thursday night, many feared a visit to Tyler Seguin and the Dallas Stars. One of the League’s most lethal offensive attacks looked to have a field day against the B’s who had seemingly given up after the first period against the Predators.

After 20 minutes, things didn’t look very promising after Boston trailed 3-1. How would they respond in the face of some serious adversity?

The comeback started with Brad Marchand’s 30th goal of the season late in the second on the power-play before the whipping boy of the defense Kevan Miller scored 35 seconds later to erase their two-goal hole.

Former Star Loui Eriksson kept the ball rolling with the eventual game-winning goal near the end of the period to give the Bruins a lead they wouldn’t give back.

Three more goals in the final frame completed a string a six unanswered goals for an impressive 7-3 victory. It was the Bruins’ signature win of the season and ended the road trip on a high.Two assists from Bergeron gave the lifelong Bruin 600 points in his illustrious career spanning 797 games.

That victory was Boston’s 20th on the road this season, giving them the second-best mark away from home this season behind the League-leading Washington Capitals (21-6-2).

The Bruins will now have some home cooking with six of their next seven games at TD Garden, where they are just 12-14-3 this season. It’s another critical stretch of the season as the B’s will face off with Pittsburgh, Tampa Bay, Chicago and Washington in the next couple of weeks. Not to mention Sweeney’s first trade deadline day as GM will come up next Monday.

All things aside, Boston finds themselves in a pretty good position after what was a lengthy trip. How will they ride the wave of momentum generated from their seven-goal haul in Dallas? Starting Monday night against Columbus, we’ll have our answer.