During the Boston Bruins’ four-game road trip, they have seen their play heading in the right direction. The team has secured big wins against tough opponents, including a 5-3 win against the St. Louis Blues on Tuesday night.

Goal scoring has seemed to come around as the Bruins have scored 13 goals during the road trip. Part of the reason the goal scoring has been so productive the last handful games is due to the play of Brad Marchand.

Marchand didn’t have quite the start he was looking for after signing his new eight-year deal last summer. The former 37-goal scorer lit the lamp just six times in his first 20 games this year after scoring 10 in his first 20 just a year ago.

It came as much surprise for Bruins fans given the amount of success he and fellow Bruin, Patrice Bergeron, had in the 2016 World Cup of Hockey. Marchand tallied seven points in 10 games, including the game winner in the final against Team Europe.

Defensively, Marchand wasn’t up to par with what the Bruins and head coach Claude Julien expect. He was a minus player in seven of his first 20 games times this year.

Aside from statistics, the eye test really told you everything you needed to know about the Bruins’ top line winger. He just wasn’t the same player that Bruins fans expected him to be after a breakout 2015-16 campaign.

After struggling through the first 40 games of the season, Marchand found his game. This included a trip to Los Angeles after being selected to his first NHL All-Star Game. The scoring touch is back as he’s tallied seven goals in his last five games, totaling 12 points. The hot hand has been in full effect as he’s been shooting at 34.5 percent through this current six-game stretch.

Defensively, Marchand has found his game as he’s been a plus player, which is where his game should be. He’s been a force shorthanded as well, scoring a key shorthanded marker against the Florida Panthers just a week ago and another one today against the Flyers to open up the scoring for the Bruins. This has helped Boston’s penalty-kill unit to climb to second in the National Hockey League with an 86 percent success rate.

The power play has been another one of the areas where Marchand has had a positive effect. He has been getting 60.9 percent of his power-play shots on net, which is the second highest it’s ever been in his career. If you’re into advanced statistics, his Corsi for percentage is at 92.0 percent, which means more often than not that the Bruins are starting with the puck on the man advantage with him on the ice. 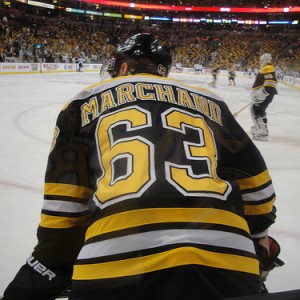 Overall, the eye test will tell you that Boston is watching a different Marchand play to start the second half of this season. He’s playing with the same intensity that Bruins fans are used to seeing. He’s making more plays and using his ability to score goals to help a team that desperately needed his goal-scoring touch.

A game like today shows exactly where Marchand is right now. The goals are coming, the points are coming, but most importantly, his game is coming together at the right time.

Marchand is playing at the top of his game right now and showing that he’s deserving of his trip to L.A. for the All-Star Game at the end of the month.