If you’re a hockey fan in Boston, then you better get ready for finger-pointing season. With an overtime loss to the Ottawa Senators in Game 6, the Bruins dropped all three of their playoff games on home ice, as well as their playoff lives. This year, however, the blame is healthily distributed amongst the entire team, with a tip of the hat to a number of costly injuries.

It’s no secret that the Bruins hardly execute under pressure. Even the team’s leading scorers throughout the regular season, such as Brad Marchand and David Pastrnak, have been streaky and had each only notched one goal before the team’s back was against the wall in Games 5 and 6. They each finished their 2017 playoff run with four points.

In Game 3, the Bruins were able to come back from a 3-0 deficit to tie the game. After the game was tied, the Bruins seemed to panic and give up all of the momentum they had just received — hauntingly similar to the Bruins’ dreadful power play performances earlier in the decade. Ottawa went on to win Game 3 in overtime.

In Game 4, the Bruins were down again, but this time only by a goal. After calling a timeout with 1:02 to go in the third, the Bruins were set up with an offensive zone face-off with an extra skater. Marchand had two great chances in close but didn’t execute, thanks to the heroics of the Senators’ Craig Anderson. After that, the Bruins simply fell apart and were not able to string even two passes together, let alone gain possession in the offensive zone.

In Game 6, this time with their season on the line, the Bruins fell to the Senators in overtime after playing an underwhelming first period and a horrendous second period.

Even veterans, like David Backes, Patrice Bergeron, and Zdeno Chara, have done little to stop Boston’s poor performance when crunch time comes knocking. Not to mention the fact that the Bruins barely squeaked into the playoffs at the end of the season in the first place.

During the 2017 trade deadline, general manager Don Sweeney decided to play it safe, giving up a conditional 2018 draft pick for Drew Stafford, the former Buffalo Sabres and Winnipeg Jets forward. Sweeney, having managed the Bruins’ farm team, the Providence Bruins of the American Hockey League, knew the value in Boston’s prospects and decided to hold onto them. The only downside to this was that the Bruins were unable to acquire a forward with better scoring capabilities, something they could have used following the underwhelming performances of both Matt Beleskey and Jimmy Hayes this season.

The move for Stafford could be better for the Bruins long term, as they held onto their youngsters and draft picks. For their 2017 playoff run, however, the decision not to acquire a more high-profile player was costly. As a new GM, Sweeney would most likely get a better deal for such a player over the offseason as opposed to the frantic pace of the trade deadline. Coupling this with the fact that Boston was 7-1-0 under Bruce Cassidy at the time of the Stafford trade, the decision not to make a big splash ultimately made sense. If it ain’t broke, don’t fix it.

Well, now it’s broken. Throughout their first four playoff games, the Bruins biggest contributor offensively, Pastrnak, had only three points. Even the Calgary Flames, who were swept by the Anaheim Ducks, had two players with four or more points in four games. 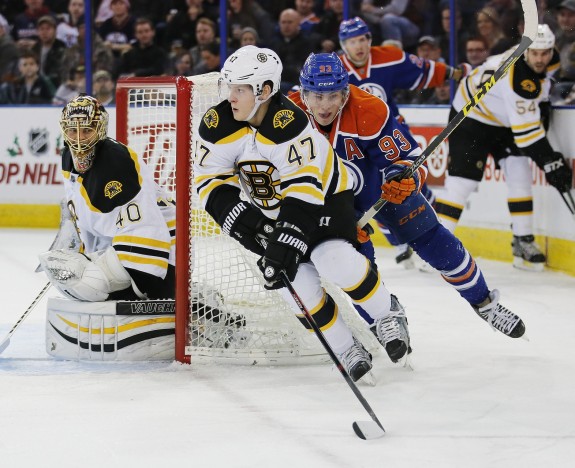 Injuries to Torey Krug and Brandon Carlo, the two best puck-moving defensemen in Boston’s arsenal, and a not-so 100% David Krejci who missed the first two games against Ottawa before being injured in Game 5, crippled Boston from the onset of the series. Adam McQuaid, who might not be the best defenseman on the Bruins, logged over 20 minutes in Game 1 and most likely would have logged more in Game 2 if he were not injured.

Ottawa took Boston’s lack of experience and ramped up the pressure. The Senators effectively took away the Bruins’ time and space with the puck which forced a number of penalties on the Bruins’ behalf. This includes six delay-of-game penalties, three of which were committed during Game 6, and a surplus of icings and offside calls that mucked up any momentum Boston could muster.

Bruins are going to end this series with more delay of game penalties than goals.

In the end, the Bruins’ lack of playoff experience cost them. Though leaders like Marchand, Bergeron, Chara, Backes and Rask have seen plenty of postseason action before, the vast majority of the Bruins have not. Namely, David Pastrnak, Ryan Spooner, Frank Vatrano, Charlie McAvoy, Sean Kuraly and Joe Morrow were getting their first dose of playoff hockey.

One thing you have to give Boston credit for is its speed, especially when you consider the team’s lack of legs in recent years. However, the pressure sustained by Ottawa led to countless bad passes and mistakes.

With another season or two under their belts, the 2017 Bruins, along with Boston’s promising prospects coming up the pike, will certainly have the tenacity to make a run for the Stanley Cup. Unfortunately, even if the Bruins had somehow come back to beat the Senators, it doesn’t look like the golf course was much farther away.

I cover the Boston Bruins and NCAA Hockey here at The Hockey Writers. Born and raised 10 miles north of Boston, I developed a love for the game of ice hockey at a very young age. There’s really nothing better than this sport, though steak is a close second.