It just so happens that the Buffalo Sabres recent stretch of improved play in which the team has a 4-game point streak has coincided with the resurgence of forward Nathan Gerbe.

The Boston College product ended a 21-game goal scoring drought when he netted two in the Sabres 4-3 win over the Florida Panthers on Thursday. He then followed up with a shorthanded goal against the New York Rangers Sunday night and overall, has been playing with a noticeable edge that has been lacking from his game since returning from a serious back injury suffered last season from being run into the boards by Philadelphia Flyers defenseman Marc-André Bourdon.

Gerbe’s road to recover was a lengthy one as the ailment required surgery last April and kept him out of action until he was able to return to the ice towards the end of January. In fact, the procedure required that his spine be worked on (which is always a scary undertaking), and there were even some doubts to whether or not he’d return to his old form. The forward’s saga was made center of attention in his first game back when he didn’t take too kindly to suffering a similar hit and then was subsequently tossed into the boards by referee Dan O’Halloran.

Given that he is a mere 5’5″ and playing in the NHL, overcoming adversity is nothing new for the strong-willed Gerbe. Throughout much of his hockey life he had to overcome naysayers and doubters, and work much harder than anyone else because of his size. “For myself, I’m 5-foot-4, and I try to compete hard every shift. If I didn’t, I wouldn’t be in the NHL,” says Gerbe. “The best advice is to never quit. I’m a small player, so size is a huge factor for me. Many people said I couldn’t make it because I’m too small, but a lot of people said I could do it. Never quitting is great advice.”

Whenever Gerbe’s been faced with a new challenge, he’s risen to the occasion. After securing a spot on the Boston College roster, he quickly emerged as one of the most dynamic players in the NCAA. He made his mark during his sophomore season where he posted 25 goals and 47 points in 41 games and was named to the all-tournament NCAA Frozen four team. During his final season as an Eagle, he led BC to an NCAA Championship on his way to being named a Hobey Baker finalist and led the nation in scoring with 68 points. 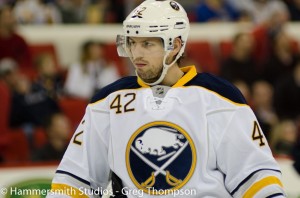 In his first pro season with the Portland Pirates, he continued to silence his critics. He scored 30 goals and tallied 57 points in total and was named AHL Rookie of the Year. He’s now a permanent fixture in an NHL lineup in spite of his modest physical stature.

Gerbe has become an inspiration for many, as he encourages people to “be great” in their own right. His exceptional determination and work ethic translates on the ice. He’s become a real thorn in the side of his opposition playing every shift like it could be his last. Although he understands the vulnerability associated with being a professional hockey player, he remains fearless, many times challenging players over a foot taller than him. This has made him a favorite among fans both in Buffalo and afar.

It’s great to see Gerbe return to form, since getting off to an understandably slow start after returning to the lineup. Even last season, he struggled only scoring 6 times in 62 games so his recent play is much welcome sign for the Sabres. Another reason for optimism is the new-found chemistry between Gerbe and his linemates Steve Ott and Tyler Ennis. The grit and physical play of Ott seems to compliment the speed and quickness of Gerbe and Ennis while also clearing out space for the skilled forwards.

The Sabres still have quite a hill to climb to reach the postseason. If they make it to the tournament, expect Gerbe to be a major catalyst for their success.