If you’re wearing rose-colored glasses, the Buffalo Sabres have points in five of the last six games. But the majority of fans of the Blue and Gold, have noticed that they’ve lost four of their last five (1-1-3) and 15 of their last 18 games.

In games that have not been settled in regulation this year, the team is 1-7. They’re 1-6 in overtime (the worst record in the NHL) and 0-1 in the shootout. The team is 4-5-7 in one-goal games. In other words, they have four wins and 12 losses. Bad teams find ways to lose. This is a team that has made losing an art form.

“It’s not good enough to get a point,” said franchise centerpiece, Jack Eichel after losing in overtime to the Carolina Hurricanes on Friday night. “It seems like it’s been the reoccurring theme here of late. We’ve had good effort and put ourselves in games and opportunities to win and we’re coming out with overtime losses.”

One Step Forward, Two Steps Back

Fans want something to cheer about. Anything. Sometimes they’ll get a competitive period. Rarely do they get a full 60-minute effort. Perhaps that’s why the KeyBank Center has looked barely half full for the past few home games.

After 33 games, the team is 8-18-7. With one of those wins in overtime, they’ve won only seven games out of 33 in regulation. Put another way, they’re losing four out of five, or roughly 80% of their games. Here are some facts to chew on: 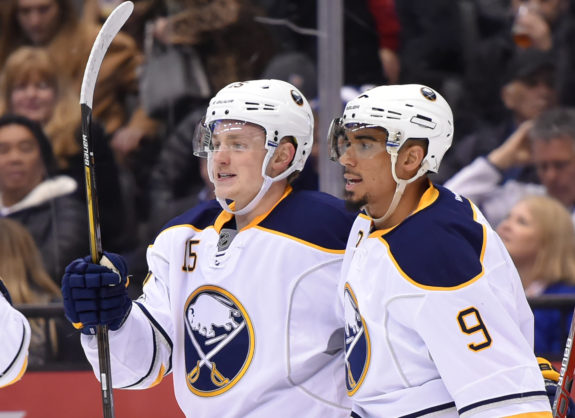 Kane and Eichel are the only Sabres with more goals for than shorthanded goals allowed. (Dan Hamilton-USA TODAY Sports)

Despite praise from their rookie head coach, Phil Housley, the losses continue to pile up. “I hand it to our guys to find the energy to come back and tie the game,” Housley said. “I thought it was a great effort on their part because it easily could’ve gone in the other direction. For the most part, we played a really, really good game. It’s just those little details, and I continue to talk about it, our play without the puck. It’s that urgency that something bad could happen and it did.”

Housley is polishing a turd here. This team is just not getting it done.

The disconnect between team and fan is hardly a new one.

When the Sabres unveiled their third jersey in 2013, the negative reaction was overwhelming. They looked as bad in previewed swatches as they eventually did on the ice. There was no sugar-coating it. The color choices, block script lettering and everything about the new design didn’t work.

Then-President Ted Black openly stated on WGR550, “It’s received a ton of criticism and a lot of attention. I think it had over four million mentions on Twitter. I’ve seen it. It’s something that doesn’t offend me. I think people have had a lot of fun with the criticisms of it. Judge for yourself whenever you see it. If you come into the store and you look at it and say I don’t want to buy it or you do buy it, in terms of moving the needles on revenues, it won’t do anything. If it doesn’t sell, it won’t really mean anything to our bottom line. It’s a third jersey. If it’s a turd burger I’ll have to put it on a bun and eat it. It’s the way it is.”

He wasn’t just open about his mistake; he was ready to add some ketchup, mustard and pickles to it and eat it with pride. He brazenly pushed ahead with his plan and welcomed any and all press. Sales were irrelevant as long as people were talking. He explained that the goal was to do something unique. It sure was, and for all the wrong reasons. The team mercilessly shelved the alternate sweater after the 2014-15 season ended.

In his brief tenure with the Sabres, providing guidance to new owner Terry Pegula when he purchased the team in 2011, Black made his fair share of mistakes. The turdburger was one of his most famous.

But he was willing to accept his whiff on the jersey. Let’s hope the team has more accountability for their actions on the ice this season.

According to sportsclubstats.com, the Sabres have a .05 percent chance to make the playoffs. To reach even a 50 percent chance (50.6% to be exact), they’d have to reach 91 points. That would mean going the equivalent of 31-12-6 the rest of the season. It conjures up Jim Carrey’s famous line in Dumb and Dumber: “So, you’re saying there’s a chance.”

This isn’t to suggest that the team should roll over and play dead, or worse yet, tank the rest of the way–losing is never acceptable.

General Manager Jason Botterill has his work cut out for him. He inherited Tim Murray’s mess and he brought in nearly a dozen fresh faces since he took the reins of this franchise. Hopefully, he’s taking a cue from Black and has a plate of fries to go with his current burger.