CALGARY — Mikael Backlund had two goals and an assist to lead the Calgary Flames to a 4-1 win over the Los Angeles Kings on Friday.

Johnny Gaudreau and Sean Monahan also scored for the Flames (15-9-2), who sit atop the Pacific Division standings with 32 points, one ahead of the Anaheim Ducks (13-10-5). Matthew Tkachuk and Elias Lindholm finished with two assists each.

Goalie Mike Smith made 13 saves to record his second straight win and improve his record to 7-7-1.

Adrian Kempe scored the lone goal for the Kings (9-16-1), who lost their second straight game after dropping a 3-2 road decision to the Edmonton Oilers on Thursday.

After giving up an early goal, rookie Kings goalie Calvin Petersen settled in and finished with 33 saves. 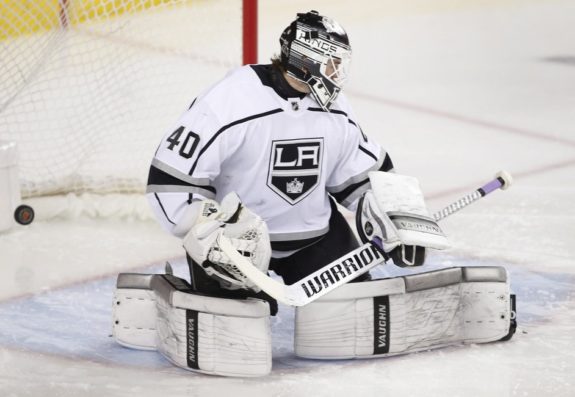 Calgary opened the scoring 36 seconds into the first period when Backlund let a harmless-looking shot go from the top of the faceoff circle that beat Petersen over his left pad.

Although the Flames outshot Los Angeles 9-4 in the opening 20 minutes, they weren’t able to get any more pucks past Petersen, who slid across his crease to deny another scoring opportunity by Backlund with 1:24 remaining before the first intermission.

Less than a minute before Backlund’s late opportunity, Smith made a stick save to thwart a chance from the slot by Kings forward Dustin Brown.

Gaudreau nearly put the Flames up 2-0 during an early power-play chance in the second period, but his shot from the slot rang off the crossbar behind Petersen.

The Kings pulled even at 13:41 of the second on a goal by Kempe, who one-timed Austin Wagner’s pass from behind the net past Smith.

Gaudreau had another great chance to score late in the period when he made a couple moves behind the net before his wraparound attempt went along the goal line and off the far post.

Gaudreau then rang another puck off the post early in the third before finally backhanding a shot past Petersen during a Calgary man advantage to put the Flames back up by a goal.

Backlund and Monahan added a pair of empty-net goals in the final minute of the game to seal the victory for the Flames.

Notes: Lindholm played in his 400th NHL game. … L.A. forward Ilya Kovalchuk missed the game with an ankle injury. After recording five goals and nine assists in his first 14 games with the Kings, Kovalchuk hasn’t recorded a point in his last 11 outings.