DENVER — Colton Parayko scored 1:34 into overtime to lift the St. Louis Blues to a 3-2 win over the Colorado Avalanche on Friday night.

Vladimir Tarasenko scored and Alexander Steen also had a goal before leaving the game with an injury. Chad Johnson stopped 27 shots for St. Louis.

Parayko gave the Blues the win when he skated in and poked the puck past Semyon Varlamov with one hand. The goal, his fourth, ended Colorado’s six-game winning streak.

Nikita Zadorov and Mikko Rantanen scored and Varlamov had 34 saves for the Avalanche.

St. Louis took a 2-0 lead on first-period goals by Tarasenko and Steen, but Zadorov got Colorado back into it with his fourth goal 1:08 into the second period.

Things heated up after that. Steen’s hard check on Nathan MacKinnon at the Colorado blue line upset Avalanche defenceman Erik Johnson. He got his elbow up on a hit to Steen moments late, igniting a scrum in the Colorado crease. When order was restored, Johnson was given an elbowing major and a game misconduct.

Steen left with what the Blues said was an upper-body injury and didn’t return.

The Avalanche played the last 36 minutes with just five defencemen.

Colorado tied it early in the third period when Samuel Girard’s shot nearly trickled in and defenceman Joel Edmundson’s attempt to clear it went off the goalie’s pads to Rantanen, who knocked it in for his 11th of the season.

Both teams had chances later in the third to break the tie. Colin Wilson nearly cashed in but Johnson made a lunging save with 7:23 left.

Zach Sanford and Ivan Barbashev had chances in the final 20 seconds, but Varlamov made big saves to send it to overtime. 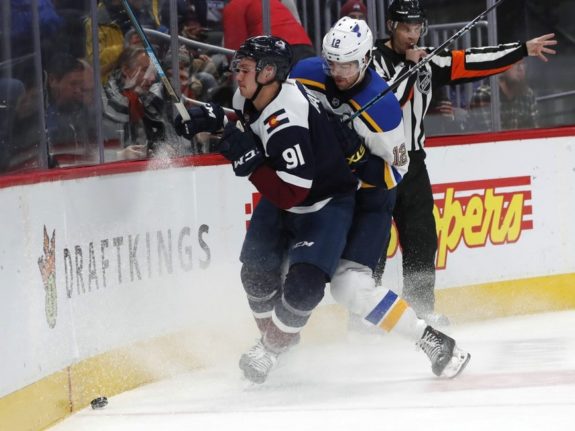 St. Louis: At Arizona on Saturday.

Colorado: At Detroit on Sunday to start a four-game road trip.