The Anaheim Ducks are backed into a corner, and it seems the only way out is a very uncomfortable decision.

At 22-years of age, Hampus Lindholm has established himself as the Ducks’ premier defenseman. He remains unsigned, holding out in his native Sweden until a new deal gets done. 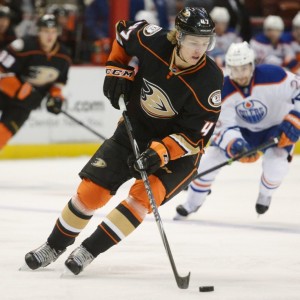 Talks between Lindholm’s agent Claude Lemieux and Ducks’ general manager Bob Murray have progressed at a snail pace. $700,000 is all that reportedly kept them apart, but that gap seems to have narrowed. Anaheim wants him closer to $5 million a season, while Lindholm’s camp believes he’s worth closer to $6 million in annual average value.

The narrow gap means a lot to the cap-strapped Ducks. With only $387,356 currently available under the cap, Murray will have to pull off some serious salary gymnastics to bring Lindholm back into the fold.

Trading Cam Fowler seems to be the most logical way to free up space. With blue-chippers Jacob Larsson, Shea Theodore, and Brandon Montour in the pipeline, the Ducks could afford to sacrifice one of their better defensemen (so the theory goes). He’s got two more years on a contract that pays him $4 million a season, making him an extremely movable asset.

The Rise of Fowler

Fowler has played out of his mind in the early going of 2016-17. He’s led all Ducks’ defensemen in ice-time, and he’s already potted a pair of goals. To boot, he’s had the biggest impact on puck possession of any Ducks’ blueliner. Shades of Lindholm, one might say.

There’s a catch: we know Fowler isn’t this good if a career’s worth of data is to be trusted. He’s never been an elite play-driver, and his defensive shortcomings are well-documented. The strong play he’s provided through four games can’t be denied, but it runs counter to what we’ve seen of him throughout his career.

Head coach Randy Carlyle loves Fowler. So does Murray. The player they’re seeing right now is the player they fully expect and believe him to be. Though it was rumored that they were shopping him this summer, it’s worth mentioning that they wanted the eighth overall pick for him. Quite the asking price.

Murray Faces Fork In The Road

The front office’s estimation of Fowler makes it all the less likely that he’s moved, and perhaps all the more likely that Lindholm doesn’t return to Anaheim. Murray has said that he doesn’t believe he’ll need to make a trade in order to bring back the young Swede.

That belief doesn’t hold up to scrutiny. Placing either Nate Thompson or potentially Simon Despres on long-term injury reserve (LTIR) wouldn’t give the Ducks the necessary cap relief to sign Lindholm. LTIR is mostly effective when an injured player with a substantial cap hit is involved.

Murray has tried to get rid of Clayton Stoner’s salary through the waiver wire, to no avail. Kevin Bieksa’s $4 million hit would be tough to move given his no-movement clause, and the fact that he’s Kevin Bieksa.

Cutting ties with Lindholm would essentially be Murray saying that trading Fowler would be too damaging the Ducks’ current Cup hopes. Keeping Lindholm, on the other hand, would show that Murray is playing the long game for this club. It’d be a nod to the talent the Ducks have brewing in San Diego and perhaps a simple recognition that Lindholm is objectively better than Fowler.

Only 22 years into its existence, maybe this is Anaheim’s version of the professional sports franchise quarter-life crisis. Whatever decision is made, there’s no guarantee that crisis will whither.