When the news broke just over a week ago that the Washington Capitals would lose Alex Ovechkin, Evgeni Kuznetsov, Dmitri Orlov and Ilya Samsonov for at least four games when they were put on the NHL’s COVID-19 list, it seems like the team would be thrown survival mode.

Even optimistic Capitals fans figured if the team managed just four points in those games against the Buffalo Sabres and New York Islanders, it would be a success. And with the team hanging on to a thin lead in the East Division with a shortened schedule, the Caps seemed to be heading for damage control.

But a funny thing happened minus two of the team’s top-six forwards, a top-pairing defenseman and its starting goaltender: They nearly won all four games and compiled a 3-0-1 mark, with the last two wins coming in dramatic fashion. Washington also set a new franchise record with eight straight games without a regulation loss to start a season (5-0-3), besting the 7-0-0 mark of the 2011-12 edition.

The only blemish over the four-game stretch was a shootout loss to Buffalo on Sunday, but the team rallied to pull off a late regulation win Tuesday against the Isles thanks to a Justin Schultz goal with 27 seconds left in regulation, then topped that off with a six-goal rally from 3-0 down to stun New York on Thursday.

What was the secret for the Capitals’ success? Well, the main reason is the inconsistent effort seen in the team’s first four games weren’t an issue in the last four. Capitals coach Peter Laviolette noted the team’s strong push in the second period of Thursday’s win after the team fell into a three-goal hole.

“I think they’ve been playing hard. … We just talked about winning the second period and getting back to our game, and I thought we really played well in the second period, played hard and turned up the heat. “I think the guys are playing hard right now. They are having fun, and it’s showing,” Laviolette told reporters after the game.

The team also relied on the next-man-up mantra, which showed as Conor Sheary, who had been playing sparingly before the last four games, took advantage of the spot on the roster vacated by the COVID list and injuries, and netted a pair of key goals Thursday to put Washington back in their contest against the Islanders.

“We have guys stepping in there, myself included. You get to move up and down the lineup and get bigger roles,” Sheary told reporters, according to the Washington Post. “Obviously a couple younger guys playing well for us, I think.” (from ‘Capitals start slow, but a five-goal second period paves way past Islanders,’ Washington Post, 01/28/2021) 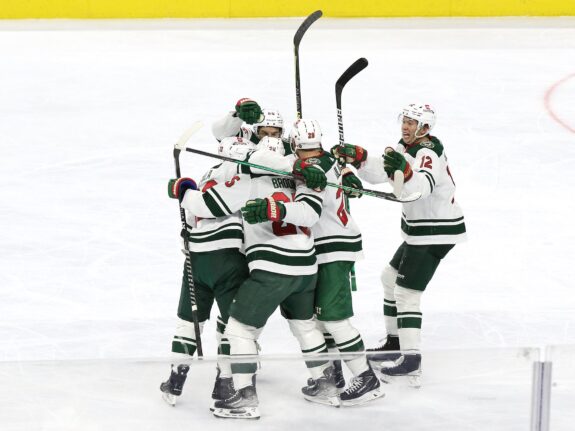 More impressive going forward is the play of goaltender Vitek Vanecek, who matched Jim Carey’s club mark by going six games into his NHL career without a regulation loss, and sports a .915 save percentage along with a 2.75 goals-against average overall.

Even more impressive, that save percentage was .921 during the last four games where he went 3-0-1, with his only blemish coming in Sunday’s shootout thanks to a lone tally by Jack Eichel – and that came after a 45-save effort against a desperate Buffalo squad. With Samsonov out for at least four games, Vanecek has shown impressive poise despite being thrown into the starter’s role early in his NHL career.

Even some of the goals he allowed during the stretch were of the fluky nature. Oliver Wahlstrom’s opening goal Thursday bounced off of Washington defender Trevor van Reimsdyk, and the second New York goal was a perfect tip by Casey Cizikas.

“It was kind of fluky it happened,” Laviolette told reporters Thursday of the Islanders’ goals. “The first one there really was nothing bad defensively, but that’s what happens when you throw pucks at the net … There was another goal we couldn’t do much about.”

With five straight starts, the rookie has made a strong case to be the team’s permanent starter even once Samsonov returns to the crease. Laviolette also noted how Vanecek kept the Islanders at bay in the third period as they pushed to climb back in Thursday’s game.

“Every game he’s given us an opportunity,” Laviolette said of his young goaltender. “At 3-0 you’re going to need a save even if you’re trying to fight your way back you’re still going to need saves along the way. Through it all, I thought he looked really calm in the third period, and he settled things down … I thought he looked his best in the third.”

With Players Returning, Another Test Awaits

With the four-game stretch coming to an end, the big question is how the team responds with the eventual return of the Russian four – although it’s not automatic all four will be cleared to play in Saturday’s game against the Boston Bruins.

The two-game set will feature the top two teams in the East, and the two teams largely expected to be the favorites when the 56-game schedule is complete. It also will carry the intrigue after Bruins forward Brad Marchand took a not-so-subtle swipe at the Caps’ foursome last week.

“We all want to be able to play, and there are rules put in place for a reason,” Marchand told reporters, according to NBC Sports Washington. “They’re not that hard to follow. We all know the consequences of breaking the rules, and we know what the rules are.

“So they brought that on themselves. We’ve all been told very heavily what we’re allowed to do and what we’re not allowed to do, so it is what it is on their side of things.”

Besides Marchand’s pointed comments, one thing the Capitals will need to do against the Bruins is continuing the work ethic that allowed them to not only survive but thrive in their four-game set. While the talent level wasn’t present in the last four games – particularly with additional injuries to Tom Wilson and Lars Eller – the effort carried the team in the short term.

But clearly the Capitals can have success when the effort is there, and once they return to a full lineup, they can’t go back to relying on talent alone.

Author of a pair of Washington Capitals books, Transition Game and Red Rising, as well as a book on the American Hockey League, Chasing the Dream. Covered the Capitals and the NHL for the Washington Times, AOL Sports, Sporting News, SB Nation, Newsday, Tampa Tribune and Pittsburgh Tribune-Review.