This summer, New York Islanders general manager Garth Snow has some contract work to do. The Isles have three key players who will be unrestricted free agents after next season in Matt Martin, Frans Nielsen and Kyle Okposo. All three players have had a good amount of tenure with the Islanders and have been through some very tough years with this team to get where they are today.

This franchise is in position for lift off. I am sure this trio realizes that and wants to be part of that future. The time for Snow to strike on long-term extensions for these three is this summer. The good news for Snow is these forwards have signed long-term deals in the past that emphasized security. A similar approach taken by Snow this summer should lead to contract extensions for all three and a reasonable cap number for the organization. In the past, the Islanders have probably done the best job in terms of managing their cap and the result is they are most likely the NHL organization in the best salary cap situation in the NHL. 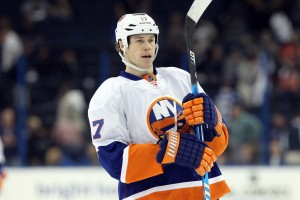 Martin, a former fifth round pick, is only 26. He plays on the Islanders’ fourth line, but don’t let that fool you in terms of his contributions to the team. The Isles’ fourth line is very different from most teams, as they play between 12 and 13 minutes a night. Martin has led the NHL in hits in the regular season for quite some time. No. 2 on the list is his linemate Cal Clutterbuck. Martin brings a lot of energy, physical play, solid two-way game and contributes close to 10 goals a season. Martin is a key link to that  team chemistry and togetherness on what is a close-knit team.

This should be, on paper, the easiest of the three contracts to get done by Snow. I am thinking a five-year extension that totals between $14 and $15 million would make everyone happy. The contract would cover Martin’s prime years.

Nielsen, a former third round pick, is 31. Nielsen is a two-way player and a perfect third line center. Nielsen is one of the best shootout players in the league, which is just one of the many aspects his game brings to the table. Last year, he finished with 43 points, which is more what you can expect of him going forward. Nielsen’s 2013-14 season of 25 goals and 58 points was a career year. I have no doubt the Isles want to extend Nielsen; however, since he will be 32 when his current contract ends, that could be a sticking point in terms of length on his next extension. I am sure the Islanders would ideally not want to go past four years in terms of an extension for Nielsen.

However, Nielsen and his agent have to know that if Nielsen puts up a 50-plus point season, it would result in a five-year contract extension next summer. Is Nielsen willing to agree to a four-year extension now to have that security? I am thinking a four-year extension for $18 million (very similar to Rangers Matt Zuccarello recent extension) would be a fair deal for everyone involved.

Okposo, the former first-round pick (seventh overall) is in his prime at the age of 27. The question with Okposo: is he a first-line forward or a great second-line forward? Okposo, who missed 22 games last season due to an eye injury, had 51 points in 60 games. The year before was Okposo’s best year where he had 69 points in 71 games (played at a high level that season when Tavares was hurt). Having gone through a scary situation last season with his eye injury, one would think Okposo would be very open to signing an extension this summer. The Islanders, on the other hand, would be locking up one of their key players during his prime. Okposo, no doubt, will be the most costly of the three. It will likely take at least a six-year deal to get Okposo to sign an extension – possibly somewhere between $33 and $36 million locks up this big, strong forward.

Snow has work to do but by training camp as I expect all three to be signed to extensions.