Saku Koivu returns to the Bell Centre on Thursday night in what could prove to be his final appearance on Montreal ice. Koivu turns 39-years old next month and may choose to retire at the end of the season. Whether or not Koivu leaves the game at the same time as his countryman and long-time friend, Teemu Selanne, remains to be seen.

One thing is for certain, the former Hab, who served a decade as the team’s Captain from 1998-99 to 2008-09, will receive some recognition from fans when he takes to the ice with the Anaheim Ducks on Thursday evening.

Koivu was the Canadiens’ 27th captain in team history,  and first European captain. After he was left unsigned to become an unrestricted free agent, the organization decided to complete the 2009-10 season without a designated captain. They chose instead to give the revamped roster time to gel in hopes that a clear candidate for the role would emerge.

Brian Gionta was that leader. At the start of the 2010 season the team announced the 5-foot-7 and 174lbs right-winger as the team’s new captain. With the title, he became only the second American-born captain in team history.

But just how different is Gionta from Koivu as the Habs’ captain?

Where both the current and former captains excel is in their on-ice leadership. Look no further than Koivu or Gionta for examples of what it takes to make a living in the NHL by outworking opponents. Neither is afraid of going hard to the net, aware that many goals are scored mere inches from the goal line. More often than not they take a beating for the efforts, without complaint.

Both Saku Koivu and Brian Gionta have faced adversity in the NHL due to their diminutive size in comparison to their peers. While Koivu is the taller of the two at 5-foot-10, as a small center in Montreal he continuously faced off against the bigger Vincent Lecavaliers, Mats Sundins, and Joe Thorntons of the league.

For Gionta, skating in on the wing and digging for loose pucks in corners against defensemen well into the six-feet range night after night demands the kind of determination and persistence required of captains. It’s his ability to battle deep in the offensive zone, cycle the puck, and get to the front of the net that has made him a dangerous scorer in the NHL.

Just spoke with Lou Lamoriello who was oozing pride with his former Devil Gionta now captain of the Habs, “They made a great decision.''

In the five years since Koivu left Montreal to join the Anaheim Ducks and Gionta moved to Montreal from New Jersey, the two veterans have posted similar numbers. Koivu has the edge statistically during the regular season, even though he’s four years Gionta’s elder. Both players are dependable defensively, which earns their coaches’ trust in tight games where they’re called upon to defend leads.

It’s important to note that Koivu and Gionta have different skill sets. The dividends of Koivu’s playmaking and Gionta’s goalscoring are noticeable below. While Koivu has significantly more assists than Gionta, the latter has scored more goals. Interestingly, their regular season statistics suggest that they would make ideal linemates.

While it’s possible to argue that Koivu has fared better during the regular season, Gionta’s playoff contributions have been superior. Of course, Montreal’s playoff success in the 2009-10 when the Canadiens reached the third round helped Gionta’s post-season production. Of Gionta’s 21 playoff points with the Habs, 15 came during that year.

Injuries have limited both players during their careers. Gionta’s had his share of bad luck since joining Montreal in 2009. The current captain of the Habs suffered a broken foot in his first season, but completed a full 82 game season in his second year with the team. Gionta would suffer torn biceps in consecutive seasons, prematurely ending his campaign in 2012 and then again during the 2013 playoffs.

The only Ducks players with higher average ice time than Saku Koivu are Getzlaf and Perry. 39 in a month, still getting it done.

While Saku has remained relatively healthy since joining the Ducks, he was plagued by injuries early in his career. However, Koivu faced nothing more severe than the non-Hodgkin’s Lymphoma he was diagnosed with in 2001, which caused the Captain to miss almost an entire season as he battled the cancer.

His return to Montreal ice in game 79 of the 2001-02 season is the stuff legends are made of. The following is arguably the most emotional videos on the internet for Habs fans of my generation:

Who Will be the Habs Next Captain?

As Gionta’s current contract comes to an end, there’s still question as to whether or not he will be re-signed. The team may choose to move in another direction as they did when they decided not to retain Koivu. If this is the case, then the coaching staff will have to determine who will be the next player to don the ‘C’ for the NHL’s most storied franchise.

If the team wishes to keep to recent tradition and name a hardworking, lead-by-example player to inherit the captaincy, look no further than veterans Josh Gorges and Brandon Prust.

If the team wishes to go in another direction, interesting candidates among players signed for several years are long-time Hab Tomas Plekanec and an ever-maturing Max Pacioretty. 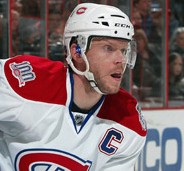 Saku Koivu was a first round pick (21st overall) by the Montreal Canadiens in 1993. He played his first game for the Habs at the age of 20 during the 1995-96 season. After playing for TPS in Finland, Koivu made the jump directly to the NHL. He’s never played an AHL game in his career.

Brian Gionta was picked in the third round (82nd overall) of the 1998 NHL Entry draft, but didn’t play his first NHL game until the 2001-2002 season at age 22. Gionta joined the devils after completing four years at Boston College and spending some time with the AHL’s Albany River Rats.

Both men have represented their countries at the Olympics. Koivu represented Finland three times, winning Silver in 2006 and Bronze twice, in 1998 and 2010. The Turku, Finland native missed an opportunity to play in the 2002 Olympics due to cancer. Brian Gionta’s sole Olympic appearance was in 2006. He scored four goals but Team USA was held without a medal.

In 10 games Gionta’s played against the Devils since joining the Canadiens as a free agent in 2009, the right-wing has one goal and three assists.

Saku Koivu on his return to Montreal in 2011: "Didn’t really enjoy the game, bc of the emotions. Hopefully tomorrow I can be more relaxed."

Playing in the league’s Western Conference, Koivu has only played against the Habs three times over the last four years in which he’s been held to only a single assist. Thursday night’s game in Montreal will mark Saku’s second time playing in his former city, and it may be his last.

I leave you with the reception the former captain recieved upon his first return to Montreal on January 22, 2011:

Matthew is a recent Creative Writing graduate at Concordia Univeristy in Montreal. He is a retired video game tester, part-time poet, and aspiring sports journalist.