Lying awake at night, listening to the snores of bedfellows and little ones in neighboring bedrooms, the mind gets to wandering. The ‘whys’, ‘hows’, whos’, and ‘whens’ of the night come to life.

If you’re a hockey fan, the thoughts often turn to the intricacies of the sport. At least in my head they do. What if? Why doesn’t this happen? Who made it so? How can it be?

I thought I would share my latest ruminations of the mind, when hockey is the focus of attention. This is the first in a series of articles. Apologies to you for having to try and follow a transcript of my midnight ramblings.

Don’t take this article too seriously, but feel free to share your comments.

An example for you. In baseball, if I throw the ball to you and miss you, I get an Error. An ‘E’. It’s actually one of the three main scoreboard stats, along with runs (R) and hits

(H) that are front and center for every single game. Take a look at the scoreboards from a representative night in the MLB. Lots of errors in the E column, huh?

In hockey terms, if I pass the puck to you and miss you and the other team intercepts, I get a giveaway +1. Otherwise, if our team keeps possession, I get ……. nothing. I made an error, but no one cared.

In baseball if the ball is hit to me and I drop it, I get another Error. In hockey, if you pass the puck to me and I miss it, I get …… nothing. If I take a shot at the net and miss, I get a missed shot. In my mind, error and giveaway and missed shot are not equal.

For instance, who led the NHL in giveaways and missed shots last year? I’d argue only hardcore fans would know. I bet a larger proportion of baseball fans know who led the MLB in errors last year.

If the NHL began assessing Errors in hockey, which players would make the most? The least?

I’ll stop here on this one.

2. Why don’t hockey players sit down during timeouts? The NBA does.

An example for you. With 2 minutes left to play in the game, holding on to a slim lead, a coach in the NBA calls a timeout to rest his key players who are exhausted on the court.

While the opposing team gears to tie the game or pull into the lead, better to recuperate some energy for the final sprint to the buzzer. Right? So, with the timeout called the players from both teams walk to their respective benches, AND SIT DOWN while the rest of the team stands around them.

Let’s now turn to hockey. With 2 minutes left to play in the game, holding on to a 1-goal lead, a coach in the NHL calls a timeout to rest his key players who are exhausted on the ice following an icing call. Sound familiar? So, with the timeout called the players from both teams skate to their respective benches, AND STAND UP.

I don’t know about you, but when I’m tired I prefer to sit. It’s an obvious way to conserve energy especially when your legs are fatigued. NHL players need to learn to SIT DOWN.

I’ll stop here on this one.

I don’t mean to wade into the whole mandatory visors issue in the NHL, but I suppose I am. In the NFL Digest of Rules > Rule 5 “Players, Substitutes, Equipment General Rules” > Section 4 “Equipment, Uniforms, Player Appearance” > Article 3 “Mandatory equipment, apparel” > Subsection a) “Helmets, face protectors” it reads

All players must wear the equipment and uniform apparel listed below, which must be of a suitably protective nature [………] Helmet with chinstrap (white only) fastened and facemask attached. Facemasks must not be more than 5/8-inch in diameter and must be made of rounded material; transparent materials are prohibited. Clear (transparent) plastic eye shields are optional. Tinted eye shields may be worn only after the League office is supplied with appropriate medical documentation and approval is subsequently granted. The League office has final approval.

The short story? The NFL deems facemasks to be mandatory. That sounds reasonable in a sport with very large men flailing their very large arms about. Plus, knees and studded cleats have a way of whizzing dangerously close to faces in pileups of human bodies. 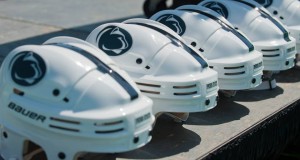 In hockey? With many players shooting a vulcanized rubber disk at over 100 miles per hour? With hard plastic elbow pads, and shoulder pads, and breakneck speed, and with knives on their feet? No facemask needed. Not even the “clear (transparent) plastic eye shield” the NFL deems optional.

Either the NFL is more caring of the health of its players, or the NHL doesn’t truly know how dangerous its sport really is. We get it. Hockey players are tough. Do they have to have dental surgery and cranial surgery to repair fractures every 3 years to prove it?

I played high school and university football. I played hockey. I’m tough, but I wore a facemask because surgeons scare me.

4. Shooting a puck at someone is considered a no-no, but punching them in the face is ok.

This is a funny one that occasionally rears its head, usually in the media following a game between bitter rivals. The latest example I know of involved the Habs and the Bruins (or was it Ottawa?) and Captain Brian Gionta (or was it Plekanec?) being accused of shooting a puck directly at an opposing player. The game continued to its end with no real fallout from the incident.

Given, it was late in the third period with the game far out of reach for the Habs, but the backlash post-game against Gionta (Plekanec?) was immediate and harsh. What he had done was “against the code”. However, if he had skated up to the other player and punched him in the eyes, it would have been “not against the code”.

To take it one step further, face washing and this garbage is “part of the game”? I don’t get it.

5. What if more than 2 assists were given out on a goal?

A preface. Don’t take this one seriously.

Who decided that if I was the fourth-last person to touch the puck before a goal by my team, that I would be eternally forgotten? On the contrary! Imagine a scoring race where assists were handed out ad libitum!

Why not give an assist to every player on my team that touched the puck, under the same possession, leading up to a goal? What if I execute a perfect give-and-go play with you and I touch the puck twice before you score a goal? Do I now get two assists?

I’ll stop early in this thought. Someone might then have a chance to catch Gretzky’s records. It wouldn’t be right.

2 thoughts on “5 Hockey Thoughts and Oddities”