The Arizona Coyotes, winners of seven of their last nine, are getting hot at the right time.

Can Arizona catch one of these three clubs and earn its first postseason berth since the 2011-12 season? It’ll require six more solid weeks of hockey, but, as the team continues to get healthy, it certainly isn’t out of the realm of possibility.

Remember, folks – this is a team that was highly competitive early in the season before injuries decimated the roster. If they can re-capture that momentum, the whiteout will return to Glendale during the second week of April.

After splitting two games in Alberta, the Coyotes closed out their three-game Western Canada roadie on Thursday evening at Rogers Arena against the Vancouver Canucks. Bo Horvat gave Vancouver the early lead just 9:47 into the first period, and Arizona was held off of the scoresheet until halfway through the third, when Jakob Chychrun fired home a power-play goal to tie the game. Lawson Crouse scored the apparent game-winner just over five minutes later, but the Canucks’ Adam Gaudette answered with 3:03 remaining in regulation to send the game to overtime, where Alex Galchenyuk did this to send the Coyotes home with the victory:

With four road points in the bank, the ‘Yotes returned home to Gila River Arena and welcomed the Winnipeg Jets to the Valley on Sunday as they kicked off a seven-game homestand by raising Shane Doan’s No. 19 to the rafters.

The pre-game ceremony, which was 90 minutes long and resulted in a 45-minute delay to the game’s start time (though no one in Glendale was complaining), was extremely emotional and was everything that it needed to be – it paid tribute to the man and player that Shane Doan was on and off the ice, and it allowed the fans to properly thank the man who gave his entire 22-year career to the franchise after his tenure with the Coyotes ended rather abruptly in 2017.

Following the ceremony, the Coyotes still had a game to play, and they fell behind early on a Patrik Laine power-play goal. However, they quickly bounced back, as they scored the final four goals of the night to earn a 4-1 triumph against the Central Division’s top team.

Following Sunday’s emotional victory, the Florida Panthers came to town on Tuesday evening. After a scoreless first period, the game quickly heated up – Derek Stepan and Oliver Ekman-Larsson lit the lamp for Arizona during the second, while Mike Hoffman scored Florida’s only goal of the middle frame. When the third period began, Florida pushed hard and took the lead with two quick goals. The Coyotes were 20-1-1 this season when leading after two periods, and it looked like they were in danger of suffering a regulation loss when the Panthers received a power play with 6:46 remaining in the game. However, just 17 seconds into the penalty kill, Derek Stepan electrified the crowd with a game-tying shorthanded goal, Arizona’s 13th shorty of the season. The Coyotes then had multiple chances to complete the comeback in regulation time, but they hit three goalposts in the waning minutes, and the game headed to overtime, and, eventually, a shootout, where all three Coyotes shooters lit the lamp to give Arizona the 4-3 victory. 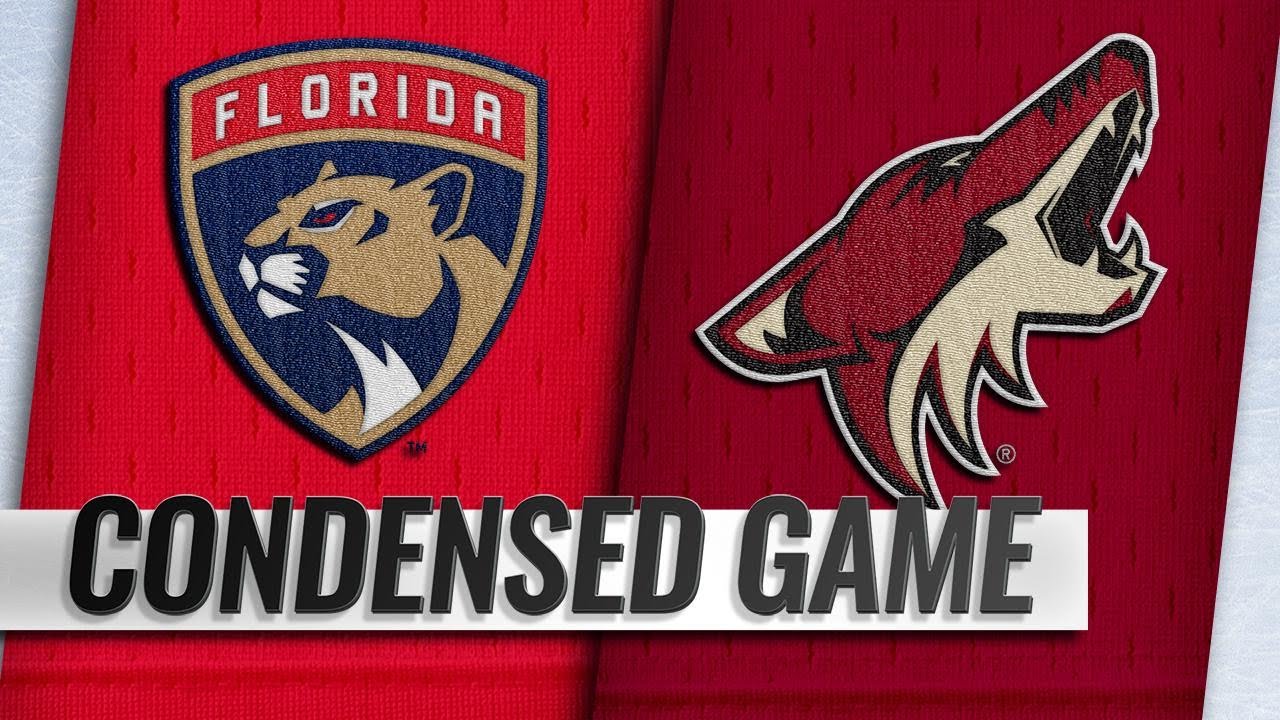 After their shootout thriller on Tuesday, the Coyotes’ homestand will continue on Thursday, when the Vancouver Canucks come to town for the final time this season. These two teams met in Glendale back on Oct. 25, with the Coyotes picking up a 4-1 win. Overall, Arizona is currently riding a six-game point streak against the boys from B.C. – they’re 5-0-1 against the Canucks over the past 12 months, with wins in all three meetings this season. They’ll likely need another win here to keep pace in the Western Conference playoff race – puck drop is scheduled for 7:00 P.M. at Gila River Arena.

The Detroit Red Wings will then come to town on Saturday evening. These two teams used to share some animosity toward one another after meeting in the playoffs in back-to-back years in 2010 and 2011, but it’s been a long time since then, and most of the players on both clubs’ current rosters weren’t around for those two classic postseason battles. The rivalry is still strong with the fans, though – expect a loud and rowdy environment when this one gets started at 6:00 P.M. in Glendale.

Arizona will then complete its slate of games for the week on Tuesday night with a divisional matchup against the Anaheim Ducks. On paper, this is a game that the Coyotes should win – the Ducks have just five wins in the last 72 days, and the ‘Yotes do not want to become the sixth victim to drop a game against Bob Murray’s struggling squad. However, as we’ve seen historically, teams that are out of contention often are motivated to play spoiler against playoff-contending clubs. Arizona needs to be ready to play when the puck drops at 7:00 P.M.

Stop me if you’ve heard this before – the Calgary Flames are red-hot. It’s been the theme in the Pacific Division all season long, and Bill Peters’ squad is once again heating up.

With the Coyotes in playoff contention for the first time in quite a while, we need to start keeping track of more than just their division rivals – here’s a look at how the other teams in the running for playoff spots in the West fared last week: