What a difference a month makes. When the calendar turned to February, the St. Louis Blues were 22-22-5. Though they were just starting to warm up from the arctic frost that had plagued the first several months of their season, fans had no idea of what was to come.

Now the Blues have completed their February schedule and look like an entirely different team. They took points in all but one game this month and are now firmly entrenched in a playoff spot. To get a better understanding of what’s caused this turnaround, let’s take a look at the month that was.

The Blues went 13-1-1 in the month of February and began the month by winning the first 10 games they played. Combined with the defeat of the Anaheim Ducks in the final game in January, it was an 11-game winning streak, the longest such streak in their history. 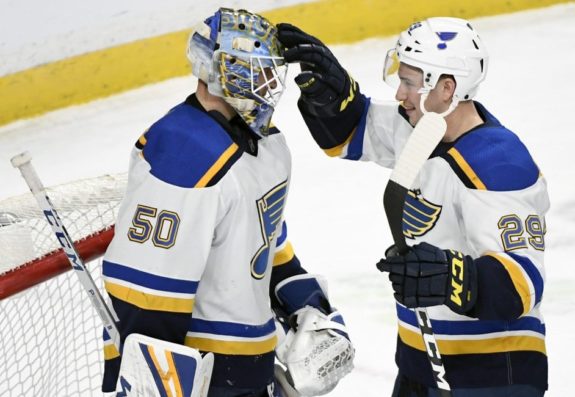 To make matters more remarkable, February was easily the hardest month on the Blues’ calendar so far. They played 15 games in 25 days, 10 of which were on the road. They had three weekend back-to-back series and went 5-0-1 in those six games. They never had a break between games longer than two days off, and that occurred only once. Every other game in February occurred after no more than one day of rest.

The Blues didn’t get any relief in the caliber of their opponents, either. Eleven of the 15 games they played were against opponents who are currently in a playoff position and two of the other four teams (the Columbus Blue Jackets and the Arizona Coyotes) are just outside the playoff bubble. They played one game against the league’s best team, the Tampa Bay Lightning, a 1-0 overtime victory in Tampa, and they played their division rivals the Nashville Predators three times, sweeping all three games.

It was an absolutely unprecedented and unpredictable run of success for a team that entered the month with a losing record, well outside of a playoff position. We’ve looked before at a number of the causes of their turnaround,  but we should take another moment to consider what Jordan Binnington has done.

Though everyone on the Blues have performed better in the month of February, there is no describing what Binnington, the team’s goaltender, has done this month. A goalie who made his first NHL start on Jan. 7, he locked down the starting job very quickly and has permanently stolen it with his performance in February.

Binnington went 10-1-1 in the month of February. He had a save percentage of .945, stopping all but 16 shots in the whole month. That led to a goals-against average of 1.45, both sterling numbers. Additionally, Binnington recorded four of his five career shutouts in February, including one against the Predators to close out the month.

Tied 0-0 in the third period against a division rival at home in a huge game.

Binnington’s otherworldly performance is a night-and-day difference from the goaltending they’d received from Jake Allen and Chad Johnson earlier in the season. Allen has performed much better since the team’s turnaround, but still has meager stats on the season. He’s gone 17-15-5, with a .902 save percentage and a 2.95 goals-against average.

Questions remain about whether Binnington is really this good (or close to this good) or whether he’s riding an unparalleled hot streak, as well as whether he is the goalie who can propel the Blues through the playoffs? But for the time being, his exceptional play has the Blues firmly in a playoff spot and hoping for more.

Could the Blues Win the Central?

Ask any Blues fan a month ago whether they’d be satisfied with a third place finish in the Central Division and they would have laughed in your face and told you even that was impossible. Now the Blues have all but locked down that spot, as they’re six points ahead of the Minnesota Wild with a game in-hand.

But the Blues may want more than just third place. There is a very real possibility they can compete for the division. With the three wins over the Predators this month, the team has found themselves just five points behind their rival, who currently lead the division. Additionally, St. Louis has three games in-hand. Theoretically, if they win those games, and simply keep pace with the Predators, they could take first place in the Central, depending on how well the Winnipeg Jets perform.

That was a laughable idea as recently as the first of the month and it points to just how spectacular a month it has been in St. Louis. The month ahead is much easier, with just six of 15 games against teams currently in a playoff spot. If the Blues play anywhere near as well in March as they did in February, they could just turn that laughable idea into a reality.