Kevin Hayes is about to begin his third season with the New York Rangers organization and for the first time since he arrived via free agency, there will be real pressure on the American forward to play a consistent brand of hockey. Hayes was excellent in his rookie season notching 17 goals and 28 assists, but he followed that performance with only 36 points in 2015-16. More worrisome was his inability to produce meaningful plays on the wing and contribute on the other side of the puck.

Pressure will be heightened this season. With no Derick Brassard to round out the top six, Hayes will need to be reliable to help support the 23-year-old Mika Zibanejad down the center and provide that third punch on offense that New York missed far too often last season.

Hayes is amazing to watch when he’s got his best game on hand, he skates well, can hang onto the puck under pressure and makes eye-popping passes that are made particularly impressive, because the centerman is 6’5″ and 227 lbs.

The big man just has that natural ability to find soft areas around the ice and slow things down even when there’s chaos all around him. On this breakaway notice how he uses his body to fight off the check and then uses his reach to whip the puck around Jaroslav Halak, despite Matt Martin coming full speed at him. 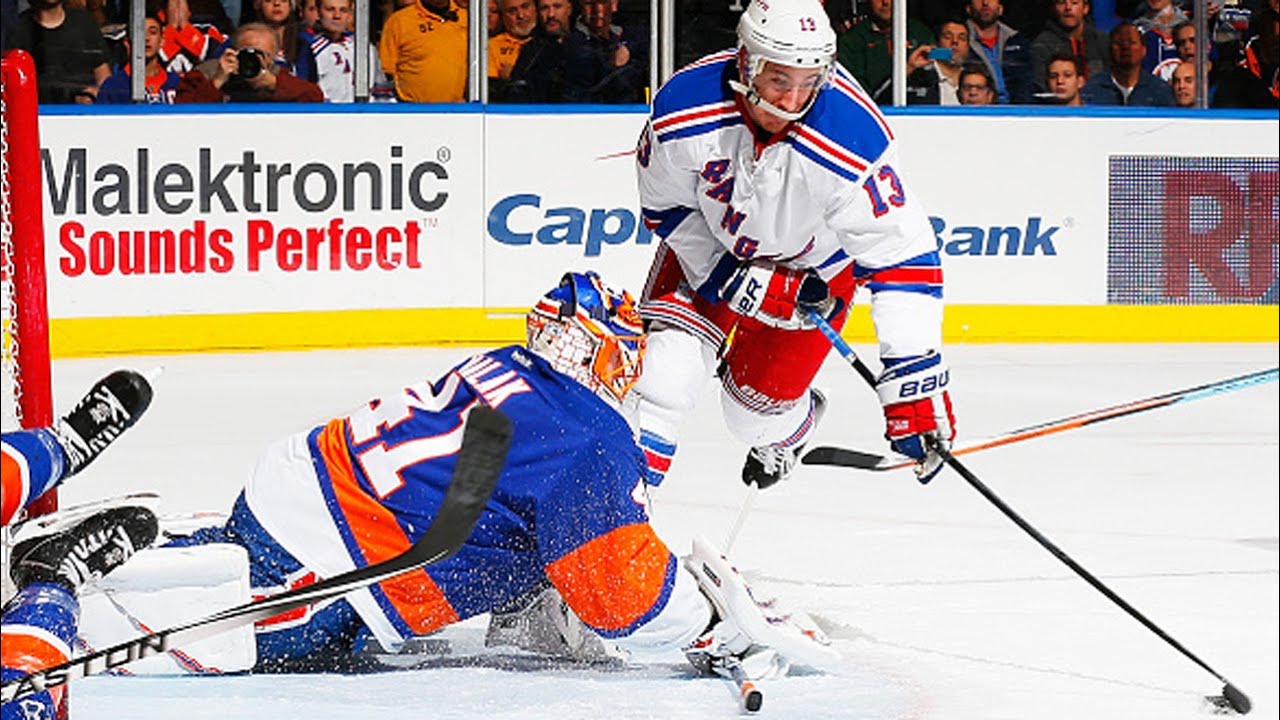 This combination of size and skill give him game-changing potential, but it was something that the Rangers were left looking for too often last season. Hayes ended up being a healthy scratch for two consecutive games and Brett Crygalis of the New York Post quoted Rangers head coach Alain Vigneault about the American forward, “Did we overestimate his possibilities? I don’t know, time will tell. But I do know that what I’m seeing now, and what we’re seeing now, is not good enough.” During this stretch it was as if everything Hayes tried was futile, defenses adjusted and he didn’t; this put him in a rough spot with his coach.

There’s no doubt that the offense in there with Hayes, the issue with him is that he can leave you wanting more with his big frame. Hayes only threw 59 hits last season good for just 16th on the club; he was also dreadful on faceoffs winning just 35.9% of his draws. More telling is his lack of takeaways, over the course of the season, you’ll notice that Derek Stepan and Brassard had 62 and 47, respectively, while Hayes only had 24 in 79 games. This is an indication that he isn’t doing enough to put pressure on defenders; for a guy with his combination of size and speed he should be a nightmare to escape. Playing with more grit in his game should open up more room for him on offense.

I think that this will be a good year for Hayes, he took some lumps last season from Vigneault and it should be a wake-up call to him that nothing is set in stone even if you’re a promising young player with huge potential.

A key factor was the departure of Carl Hagelin before the season, Hagelin’s speed always seemed to help Hayes play his best and without that jump on the wing he seemed lost at times. With a new cast of speedsters around him and his friend Jimmy Vesey this year, Hayes should be able to get back to playing his game and dealing pucks into space to back defenders off of him.

I graduated from Brooklyn College with a B.S. in Broadcast Journalism. Shortly after, I began writing for the Full Tilt Hockey Network, where I still contribute, covering a broad range of topics across the NHL.
I have been contributing to The Hockey Writers since February of this year focusing on the New York Rangers. My articles tend to focus on analysis of players, and possible directions that the organization could go.