The Sabres are one of the hottest teams in the NHL right now as winners of 10 of their last 14 games.  The hot streak has propelled the Sabres into the playoff discussion in the Eastern Conference.  After the loss to Winnipeg on Tuesday night, the Sabres find themselves at an interesting cross roads.  They currently sit in a place in the standings that I like to call no man’s land.  Buffalo sits six points out of the wild card and Florida, who currently holds the final playoff spot, has three games in hand on the Sabres.  If you assume the wins, the Sabres truly sit 12 points out of the wild card.  On the other hand the Sabres sit 9 points out of last place.  Remaining in this position in the standings, may be a worst case scenario for the 2014-15 season.

The Sabres fan base is divided into two groups that represent the crossroads, the Sabres find themselves at.  One half of the fan base believes the Sabres should continue to push for the playoffs and even make moves that helps them make the push.  The other side is in favor of the Sabres making a push for the top pick in next years draft.  Is either side wrong? No.  Do both sides have a valid argument? Yes.  However, at the end of the day the Sabres need to choose which path they wish to take.

How We Got Here

Let’s wind the clock back a few years.  The fan base in Buffalo was sick and tired of the mediocrity.  Fans were sick of the Sabres finishing the season in no man’s land.  Let me remind you how the Sabres finished over the last few years:

Buffalo has been the team who has floated around the 7-12th seed in the Eastern Conference since the 2007-08 season.  The fan base was ready for the Sabres to get back to being a cup contender like in 05-06 and 06-07.  Fans settled with the plan of “suffering” that was rolled out by the former regime led by Darcy Regier.  Fans accepted the idea of losing to get great talent that would allow the Sabres to build around.

The Path of Losing

The plan was successful last season and the Sabres were rewarded with Sam Reinhart.  Going into this season two prizes sit waiting at the end of this road; Connor McDavid and Jack Eichel.  McDavid and Eichel are being talked about as generational talents that will instantly become difference makers on any NHL franchise they join.  Having one of these kids on their roster, will allow a team to be in the discussion for a Stanley Cup almost year in and year out.  Sure, I’ll admit nothing is guaranteed, but these are two can’t miss prospects.  As close as it gets to guaranteed.

In direct reference to the Sabres, adding one of these kids to perhaps the number one prospect pool in the NHL could be the final piece to the puzzle.  With the success the Sabres are currently having now, add a player like McDavid, and Buffalo could easily be a playoff team.

Many people point to how Crosby has only brought one cup to the Penguins as a argument against losing for the draft pick.  My answer to that is where are the Penguins every season?  At the top of the NHL standings and perennial cup contenders.  Want more proof on how getting a high draft picks means winning?  Let’s take a look at the last few Stanley Cup winners:

I think we can see a trend here.  All of the players mentioned above were very important figures in their team winning a championship.

The recent winning has fans in Buffalo actually thinking about the playoffs.  Going into this season, the idea of the playoffs was laughable for the Sabres.  With the recent streak the Sabres found themselves within 4 points of the final playoff spot.  However with the games in hand teams hold on the Sabres, and loss to the Jets, the Sabres now seem to be way off from a wildcard spot.

This idea of the Sabres making the playoffs is an extreme long shot in my opinion.  When you look at the numbers, Buffalo is by far the worst possession team in the NHL.  Of course, every year a team seems to beat the numbers; Buffalo could be that team in 2015.  The Leafs manage to beat the numbers every season 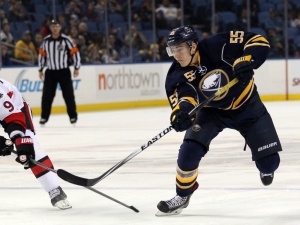 and the Avalanche beat the numbers last season.  However, this season the Avs have fallen back to earth.  Eventually a regression to the mean will happen.

The current path of the franchise doesn’t line up with the Sabres taking this path.  They have too many players on expiring contracts and the youth is not ready to contribute on a nightly basis at the NHL level.

As you can probably tell, I’m in favor of the Sabres staying the course and rebuilding.  The worst thing that could happen to the Sabres this season is remaining in the current spot they’re in.  Finishing in the middle of the pack and out of the playoffs does nothing for either side of the fan base.  Over the next month, the Sabres face a more difficult schedule as well as more games on the road.  With 50 games left a lot of the story for the 2014-15 season has yet to be written.