Heading into the season, one of the biggest questions for the Dallas Stars was, “How will the defense hold up?”

Following the departures of Sheldon Souray, Adam Pardy and Mark Fistric in the offseason, it was a valid question. With only Aaron Rome coming back as a replacement, it appeared that the Stars were prepared to rely heavily on young players within the organization to fill that void.

Maybe in the summer that appeared to be an OK idea. Before the lockout hit, teams still had to prepare as if an 82-game season was going to happen. Having such a young defensive corp isn’t so bad if they have time to get adjusted to the NHL game.

Well, in a shortened season, Dallas is about 14 percent of the way through its schedule and currently sits at the bottom of the Pacific Division. There are many reasons for that, yes. The Stars are 27th in the NHL in goals per game, and have yet to skate a game with both Jamie Benn and Derek Roy in the lineup.

On the surface, defense doesn’t appear to be an issue for the Stars. Even after a sloppy 4-1 loss to Detroit earlier this week, Dallas is 12th in the league with 2.57 goals against per game.

A huge reason for this has been the play of goalie Kari Lehtonen. Among goalies who have played in at least four games, he is sixth in the league with a .926 save percent, and has made a number of highlight reel saves.

Part of that can be attributed to the general youth of the defense. Half of Dallas’ defense against Detroit — Jordie Benn, Brenden Dillon and Philip Larsen — have a combined 87 games of NHL experience. With this week’s call-up of Jamie Oleksiak, Dallas could be skating with three rookies on defense.

But how has each member of the Stars’ defense played, individually, so far this season? Using 5-on-5 corsi metrics, we can dig a little deeper. 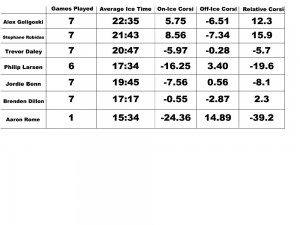 A quick explanation of what corsi is. If you want and in-depth explanation, head over here. But the streamlined version is this: it is essentially a plus/minus stat for shot attempts. A player gets a plus for any shot attempt is team makes (either on net, missed net or blocked) and a minus for any shot attempts the opposing team makes. A positive on-ice corsi rating is good. The off-ice corsi rating the the shot variance for when the player is not on the ice (meaning it doesn’t necessarily reflect on the player, but rather the rest of the team). Relative corsi is a combined total of the two. A positive relative corsi number is good (or, if you will, above average), a negative is not (below average).

For comparisons sake, of the 15 Dallas forwards who have suited up at least once this season, seven have positive relative corsi numbers.

What the numbers reveal isn’t necessarily surprising. Robidas and Goligoski both bring a ton of experience to the table and have been steady blueliners throughout their careers. For Stars fans who still aren’t fans of the Goligoski for James Neal and Matt Niskanen trade, it shows that Goligoski hasn’t been a huge part of the problem, despite a lackluster three points in those seven games. Even with Dillon’s positive relative corsi number, Robidas and Goligoski are the only two Dallas defensemen with positive on-ice corsi numbers.

Rome’s numbers almost have to be a wash. He began the season dealing with an injury, and the only game he has appeared in so far this season was a 4-3 loss to St. Louis.

Larsen scored the defensive corp’s only goal of the season earlier this week in Columbus, and has been seeing more power play time. Still considered one of the team’s brightest prospects, he is more offensive minded. At 6-foot, 190 pounds, he is not overtly physical, which can be an issue in the defensive zone, particularly when he is paired with the equally offensive-minded Goligoski, who only stands 5-foot-11, 182 pounds.

Another puzzling statistic for the Stars defense is offensive zone start percent, meaning what percentage of the player’s shifts start in the offensive zone. All seven of the Stars’ defenders are under 50 percent, which speaks to how backed up Dallas has been this season.

What does this all mean? Simply put, the Stars need more shots, which starts with the offense. The only team with fewer shots per game than the Stars’ 25.6 is Nashville, but the Predators are allowing nearly seven shots per game less than Dallas is.

Head coach Glen Gulutzan has been striving for more balance on the back end. After starting the season with Robidas and Goligoski on the same pairing, he broke that up, primarily playing Goligoski with Larsen, Robidas with Dillon and Daley with Jordie Benn. As Oleksiak prepares to make his NHL debut tonight, he will reportedly be skating on a pair with Goligoski.

Perhaps the answer is as simple as patience. With as many as three rookies on defense Friday night against Phoenix, experience with the NHL game can only help the young players. In time, natural progression should take its course.

The only issue is, with a 48 game schedule, time is not on Dallas’ side.

Ryan is currently a senior at Bowling Green State University in Bowling Green, OH. He covers the school’s hockey team for The BG News, the student newspaper at BGSU. You can reach him at r.satkowiak@gmail.com or on Twitter at @Ryan_Satkowiak.