ST. PAUL, Minn. — Radek Faksa, Roope Hintz and Joel L’Esperance scored for Dallas in a span of 2:22 early in the second period, and the Stars hung on for a 4-1 win over the Minnesota Wild after goalie Ben Bishop was hurt Thursday night.

Anton Khudobin stopped 14 of the 15 shots he faced in relief of Bishop, who made seven saves and established a franchise record by stretching his scoreless streak to 240:53 before exiting with a lower-body injury.

Alexander Radulov added an empty-netter for the Stars, who have won six of their last seven games — five in regulation.

Jason Zucker had the only goal for the Wild, who took a big hit in the Western Conference wild-card race with this loss. They’re in ninth place with 74 points and 11 games to go, trailing Arizona for the final spot. The Coyotes had 75 points entering their game against Anaheim.

The Stars, meanwhile, moved into a tie with St. Louis for third place in the Central Division with 79 points. They have 12 games remaining, as do the Blues.

At the 4:11 mark of the second period, Blake Comeau sent an off-balance one-timer from right inside the blue line into the slot where Faksa blindly tipped it past Wild goalie Devan Dubnyk as Comeau fell down for his fourth goal in his last 10 games. 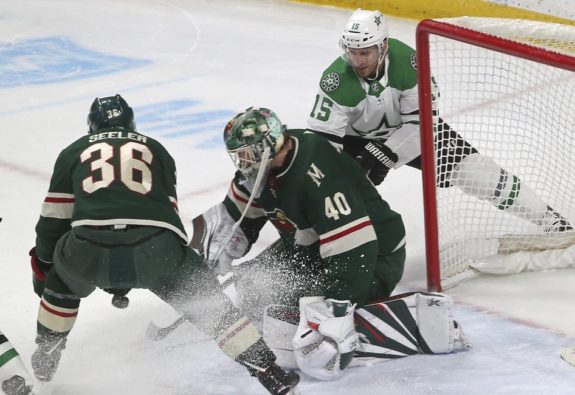 Hintz, who scored twice Tuesday in a 3-0 win at Buffalo, knocked in a sprawling rebound just 1:14 later that sneaked between Dubnyk’s pads and crept across the goal line. Then a mere 1:08 after that, Jamie Benn’s backhand pass from the boards was deflected in by L’Esperance for his first NHL goal.

The goalie change immediately followed, except this switch was strangely made by the scoring team. That’s because Bishop, who leads the NHL in save percentage and posted shutouts in each of his last three starts, was injured.

Khudobin, a seventh-round draft pick by the Wild in 2004 who’s in his 10th season in the NHL, picked up right where Bishop left off. Zucker ended an 0-for-18 slump by the Wild on the power play over their last six games with his rebound backhand midway through the second period , but that’s all they managed.

This was already going to be a critical response for a team still trying to find some momentum in this sidewinding season dented by the loss to injuries of top-scoring defenceman Matt Dumba (39 games missed) and captain and centre Mikko Koivu (18 games missed), and disrupted by three separate forward-for-forward swaps that brought Victor Rask, Ryan Donato and Kevin Fiala into the lineup over the last two months.

Throw the Western Conference standings into the equation, and this matchup with the Stars became one of the Wild’s most important games of the month. They fell flat again, losing their third straight game and falling to 1-6-3 in their last 10 home games since Jan. 19.

NOTES: Zucker has seven goals in the last 10 games. … Tyler Seguin, who had the first assist on Hintz’s goal, has 32 points in 28 career games against the Wild. … Minnesota’s Luke Kunin (upper body) returned from a two-game injury absence, but fellow centre Joel Eriksson Ek was scratched. … L’Esperance, recalled from the AHL on Feb. 27, skated in his 11th NHL game.

Stars: Return to Dallas to start a five-game homestand, beginning with the Vegas Golden Knights on Friday night.