The Red Wings led 3-0 in the second when Stamkos scored on the power play to start Tampa Bay’s comeback. His 383rd goal pulled him even with Lecavalier, and the NHL-leading Lightning weren’t done. The league’s highest-scoring team added four goals in the third, with Kucherov and Tyler Johnson scoring 26 seconds apart to give Tampa Bay the lead with 11:10 remaining. Kucherov made it 5-3 with 3:22 left. 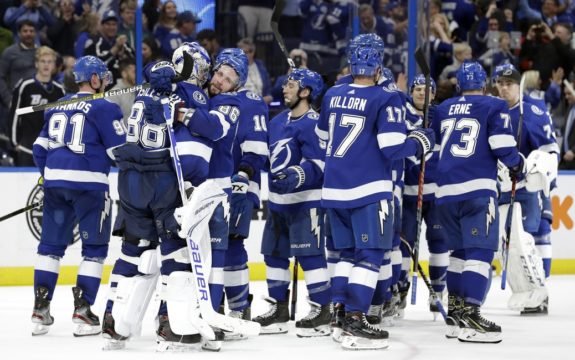 Bowey opened the scoring in the first with a shot from just inside the blue line. It was only the second goal of the young defenceman’s career and his first since arriving last month in a trade with Washington.

The Lightning had plenty of time in the offensive zone in the first period, but the Red Wings were dangerous on the counter. Helm struck while Detroit was short-handed, breaking in on a 2-on-1 and beating goalie Andrei Vasilevskiy for his 100th career goal.

Early in the second, Abdelkader slipped behind the Tampa Bay defence and scored to make it 3-0, but Stamkos answered with his 35th goal of the season, beating goalie Jimmy Howard with a wrist shot from the left circle.

Point’s 38th of the season cut the lead to one early in the third, then Kucherov tied it on a slap shot just 4 seconds into a Tampa Bay power play. Johnson made it 4-3 almost immediately thereafter, and Kucherov added his 35th of the season, beating Howard from in tight.

Rasmussen scored on a scramble in front to bring the Red Wings back within one with 1:42 remaining.

NOTES: The Lightning also matched a franchise record with their 25th road win of the season. … Kucherov posted his NHL-leading 34th multipoint game.