Nick Bjugstad and Jake Guentzel each had a goal and an assist for Pittsburgh, which has won six of seven and sits third in the Metropolitan Division. Brian Dumoulin and Patric Hornqvist also scored, and Casey DeSmith made 26 saves for his fourth career shutout.

Carter Hutton stopped 21 shots for the Sabres, who matched a franchise record with three consecutive shutout losses. It happened for the first time last season during a three-game stretch that concluded with a 4-0 loss to Pittsburgh. The Sabres were beaten 2-0 at home by Dallas on Tuesday following a 3-0 defeat in Colorado on Saturday. 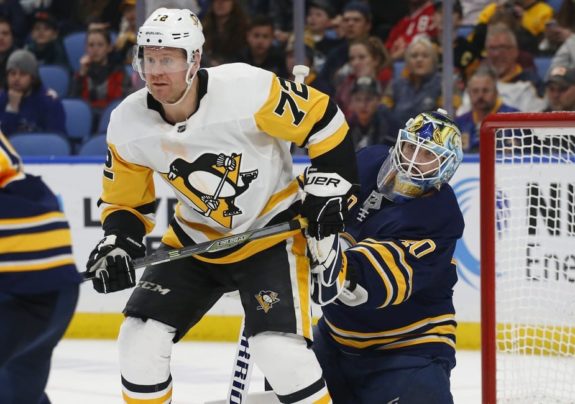 Kessel opened the scoring on the power play 6:40 into the second period on a terrific passing sequence led by Crosby. With Guentzel stationed in front of the Buffalo net, Guentzel fed Crosby inside the right circle. Crosby then fired cross-ice to Kessel inside the left circle, and he had an open net for his 24th goal of the season.

Dumoulin made it 2-0 with 4:53 remaining in the second. Evgeni Malkin neatly curled behind the Buffalo net before spotting Dumoulin creeping up ice. Dumoulin’s wrist shot beat Hutton to the glove side.

Another power-play goal gave Pittsburgh a 3-0 lead before the end of the second. A deflected pass from Kessel found Hornqvist in front, and the veteran buried a backhand for his 17th goal of the season.

Bjugstad made it 4-0 following a bad turnover by Sabres defenceman Matt Hunwick midway through the third period.

Penguins: Home against Philadelphia on Sunday.

Sabres: At the Carolina Hurricanes on Saturday.