When The New York Rangers sent melodramatic pest Sean Avery down to the AHL, it opened up an interesting can of worms for the Dallas Stars.

Everyone is already familiar with how Avery wound up in New York for the second time: the lucrative 2008 contract signing with the Stars, the “sloppy seconds” remark, the fallout, and the waiver claim where Glen Sather came in and took the entire mess off the Stars’ hands.

It wouldn’t be the last time the whole Avery situation affected the Stars, however. Despite going back to the Rangers, Avery’s $1.9 million cap hit remained against Dallas’ salary cap. But when the Rangers sent Avery down to the AHL last week, Dallas was officially relieved of anything having to do with him and his contract came off the books.

The problem is that, in a bizarre twist, the move pushed the cash-strapped Stars below the league’s salary cap floor, forcing them to add a player to their NHL roster lest they face league punishment. 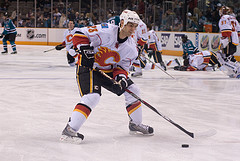 Where will Nystrom fit into the Stars’ lineup? (Justin Yamada – Flickr)

Nystrom signed a four year deal with the Minnesota Wild in the summer of 2010, but was never able to fit into the team’s system. His -16 last year on the Wild was a team worst. As the preseason came to a close it appeared that Nystrom was the odd man out in Minnesota, and was sent down to the AHL after clearing waivers. The Stars, needing to add some salary, and the Wild, interested in moving past a signing that they regret, made the trade on Wednesday, with still undetermined future considerations heading Minnesota’s way.

The problem, however, is that although the Stars were forced to add someone’s salary, they didn’t pick the right player to do it with.

Nystrom’s game is pretty straightforward: he’ll crash, he’ll bang, he’ll kill penalties, and he’ll stick up for his teammates when they’re in need, but there isn’t much else there. His career-high season point total of 19 can attest to that.

He certainly fits into the “tough to play against” mantra that has been echoed by GM Joe Nieuwendyk and rookie head coach Glen Gulutzan all offseason, but fails to address Dallas’ currently most dire need: depth scoring.

Beyond Dallas’ top two lines, goals are hard to come by. It’s a precarious situation, because a major injury to any of Dallas’ top-6 forwards will force players like Tom Wandell, Radek Dvorak, Adam Burish or Vernon Fiddler into extended periods of uncharacteristic time on the two scoring lines.

Meanwhile, free agents such as Sergei Samsonov, Owen Nolan and Steve Bernier remain without a team. Sure, none of those three players strike fear into the hearts of opposing netminders, but they’re still capable of more offensive production than Nystrom, and could potentially fill in on the top two lines in a pinch. One of those three could have been the right move for the Stars.

It’s not to say that Nystrom is a bad player; he’s the heart and soul type of character player that every team should have. But with Burish, Fiddler, Jake Dowell, and Krys Barch already on the team, along with the aforementioned lack of depth scoring, this move only wastes an opportunity at addressing a major team issue, and does so with a $1.4 million price tag.