With the 2016 NHL Draft now wrapped up, the focus turns to the 2016-17 NHL season. As it stands, most of the biggest names are now off the free agent market and almost every team in the NHL is under the upper limit of the salary cap, so a general idea of what players each team will ice come October is starting to come into focus.

The Penguins, fresh off their second Stanley Cup triumph since the lockout, return one of the most talented rosters in the game. Sidney Crosby, a finalist for last year’s Hart Trophy, will look to lead the Penguins to the first back-to-back Stanley Cup wins since the Detroit Red Wings in 1998. Patrick Kane could defend his Hart win with the ever-dangerous Chicago attack at his disposal. Erik Karlsson, Drew Doughty, and the newest Nashville Predator PK Subban look to be the early front-runners for the Norris Trophy.

The Calder Trophy is always a hotly debated accolade; last year’s winner was decided by just over 300 votes, and it was one of the largest margins of victory in the past decade. The spotlight for early Calder favourites is always shining on the latest top draft picks, and Auston Matthews and Patrik Laine certainly appear to be strong early contenders for the award.

However, the Calder finalists are never as cut and dried as the top picks from the most recent draft. In the past three seasons, only three of the nine Calder finalists were teenagers, and the most recent champion, Artemi Panarin, was 24 years old when he (somewhat controversially) captured the trophy. Outside of the biggest names, including Matthews, Laine, Mitch Marner, and Dylan Strome, here are a few players that have the ability to break out and spot themselves firmly in Calder Trophy discussions.

One of the few top-notch prospects coming out of Denmark, Oliver Bjorkstrand first put his name on the map with two standout seasons as one of the leading scorers for the WHL’s Portland Winterhawks. It was in 2014-15, Bjorkstrand’s final junior campaign, that he truly emerged as one of the Blue Jackets’ top young goal scorers. Bjorkstrand captured the WHL Player of the Year award, leading the WHL in points with 118, including a CHL-best 63 goals. He was also a member of Denmark’s squad at both the World Championships and World Junior Championships, showing that he could hold his own against professionals several years older than him.

He turned professional himself in 2015-16, joining the Blue Jackets’ AHL affiliate in Lake Erie. Bjorkstrand’s rookie AHL campaign flew under the radar, as he struggled at times to adapt to the more physical and faster pace of play in the pro ranks. In total, Bjorkstrand could muster only 17 goals and 29 points in 51 games, but a late-season call-up to the Blue Jackets is where he showed he could be ready for the spotlight as soon as next season.

Bjorkstrand’s greatest asset is his shot, which features fantastic accuracy and a deceptively quick release. While he’s not the biggest or strongest player the Jackets will have to offer, he’s not afraid to get his nose dirty and create chances with tenacious forechecking in the offensive zone. The Blue Jackets have a dearth of high-end playmakers, but Bjorkstrand’s gritty playing style should win over head coach John Tortorella. His knack for finding open areas on offense and his high-level shot could make him a candidate for 20+ goals in his first full season in the NHL.

Easily the breakout star of the 2016 NHL Playoffs, Matt Murray was relatively unheard of to the average NHL fan entering the 2015-16 season. Murray, 21 years of age at the start of the year, had been developing his game with the AHL’s Wilkes-Barre/Scranton Penguins when Pittsburgh starter Marc-Andre Fleury’s unfortunate concussion necessitated Murray’s promotion to the NHL club.

While he was somewhat of an unknown to many outside of NHL circles, Murray’s play in the AHL had certainly earned him the opportunity to show his talent on hockey’s biggest stage. Murray’s incredible rookie season in 2014-15 included accolades such as the AHL’s Rookie of the Year and AHL Best Goaltender awards. Along the way, he set records for shutouts in a rookie season with 12 and longest shutout streak with an astounding 304:11 stretch without a goal against.

Murray’s outstanding postseason came on the heels of a stellar run at the end of the NHL season, as he went 9-2 in 13 starts with a rock-solid 2.00 goals-against average and .930 save percentage. His postseason play, however, truly cemented him as the Penguins’ future starter. And after winning 15 games in the playoffs, tying the NHL’s rookie record in the process, Murray is poised to become just the second goaltender in NHL history to win the Stanley Cup and then contend for the Calder Trophy the following season. 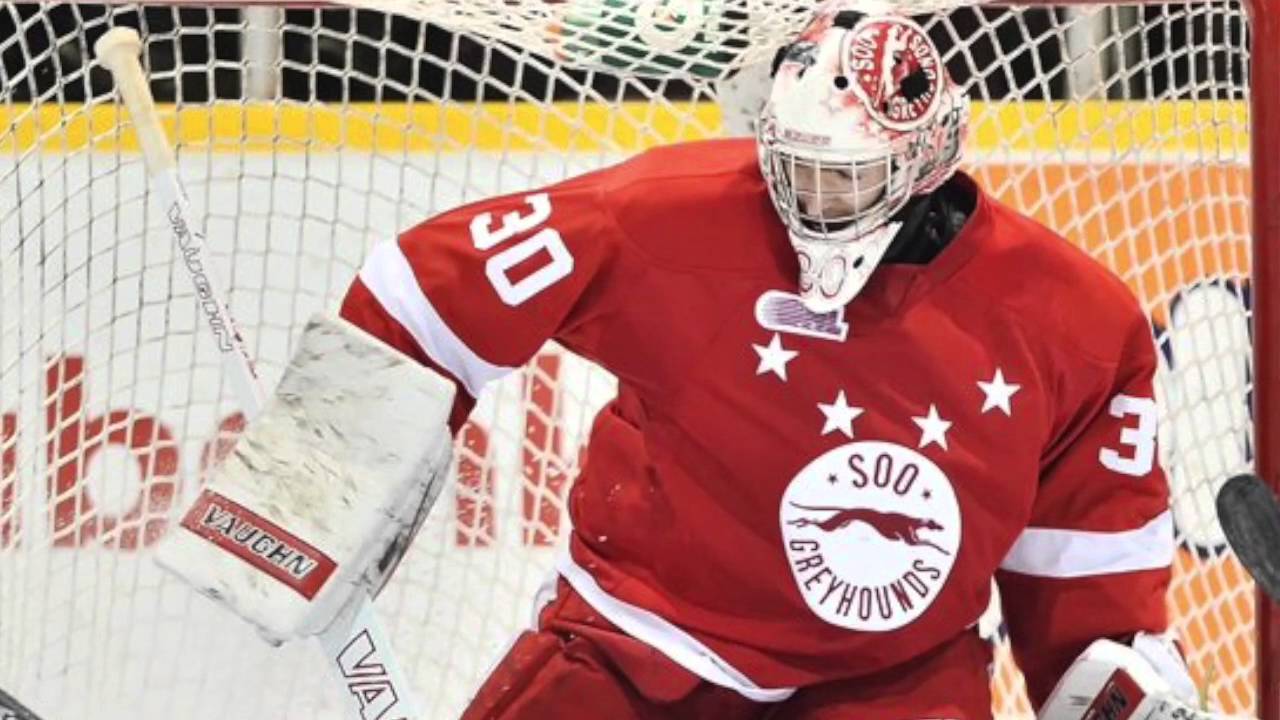 Even with his great play in his first taste of the professional levels, no one could have predicted that Murray would show he’s ready to take over the starter’s role as soon as 2016. With incumbent starter Marc-Andre Fleury healthy again, it’s anyone’s guess if Murray will take the reins as Pittsburgh’s bonafide starting goalie next year. But with one of the strongest teams in the league playing in front of him and a knack for calm and steady play, Murray could become the first goaltender since Steve Mason to win the Calder Trophy.

While the popular narrative nowadays surrounding the Rangers is their dearth of quality draft picks, their ability to unearth solid players through the draft is a major a reason that the Blueshirts have been one of the NHL’s best teams of the last half-decade. The latest non-first round pick who could make a splash in the Big Apple is Russian winger Pavel Buchnevich.

One of three third-round picks by the Rangers in 2013 (joining Anthony Duclair and Adam Tambellini), Buchnevich recently completed his third full season in the KHL, finishing fourth among all under-24 forwards in scoring. At just 21 years old, Buchnevich was one of the youngest regular players in the entire league. After signing his first NHL contract in May, Buchnevich will transition to North American ice for the first time in his career. With more than three full seasons of professional hockey under his belt, Buchnevich is all but guaranteed a spot with the Rangers.

The KHL has had quite a few impressive young exports over the past few seasons, with Evgeny Kuznetsov, Vladimir Tarasenko, and Artemi Panarin all making a name for themselves after honing their craft in the KHL. While the speedy Buchnevich doesn’t have quite as impressive a resume as the aforementioned trio, his heavy shot and complete offensive game could lead to an important role with the Rangers as soon as next season. If he can carve out top six minutes and earn some time on the talented Rangers power play, Buchnevich has all the tools to post big offensive numbers in his first NHL season.

The Chicago Blackhawks have created a modern-day dynasty on the strength of their ability to consistently draft and develop NHL contributors. With the perpetual search for cap space Chicago faces, talented young players such as Nick Schmaltz are put in tough situations and often pass with flying colours (Panarin the most recent example). The Blackhawks’ first-round draft choice in 2014 (20th overall), Schmaltz had a big year centering one of the highest scoring lines in college hockey. Playing for the University of North Dakota, Schmaltz put up 46 points as the Fighting Hawks won the National Championship over Quinnipac University.

Despite his extremely high skill level, Schmaltz weighed less than 170 pounds when he was drafted, leading to concerns over whether he handle the physical play at higher levels of play. Since being drafted, Schmaltz has gained strength and now has over 180 pounds on his 6’1″ frame. A natural centre, Schmaltz’s vision in the offensive zone and soft hands are promising signs he can become a top six centre for the Blackhawks in the future.

Schmaltz signed his first NHL contract with Chicago in mid-June, and at only 20 years old, was a full year younger than when his older brother Jordan signed his first contract with the St. Louis Blues. After departing with Teuvo Teravainen via trade last month, it’s very likely that Schmaltz is able to make the NHL team this fall and provide a youthful scoring punch to a Blackhawks forward group that’s short on effective depth players. If Schmaltz can land in the enviable position of playing alongside Patrick Kane or Jonathan Toews, he could be a front-runner for the Calder Trophy next season.

Alongside top ten draft picks Mitch Marner and Matthew Tkachuk, Christian Dvorak formed one of the most dangerous lines in recent OHL history. With Marner sweeping the OHL’s major regular- and post-season awards, Dvorak’s great season went relatively unnoticed by most in hockey circles. In 59 games, Dvorak led the OHL with 52 goals and added 69 assists to finish second in the league’s scoring race with 121 points, which actually bested Marner’s total. Dvorak also helped lead Team USA to a bronze medal the World Junior Championships, contributing 8 points in 7 games. Dvorak failed to win any hardware after the season, but as many pointed out, the Knights’ co-captain was nipping at Marner’s heels for the accolade.

Mitch Marner was named CHL Player of the Year. His nomination was determined by a coin flip vs Christian Dvorak…

Dvorak, who finished his last season of junior eligibility last season, is expected to compete for a spot with the Coyotes as soon as this fall. While he’s not the biggest player at just 6’0″, Dvorak weighs in at 190 pounds and uses his strength well to play a puck possession game in the offensive zone. The Coyotes’ division is loaded with talented, physical centres, and Dvorak is expected to be one of the Coyotes’ core forwards in the future. 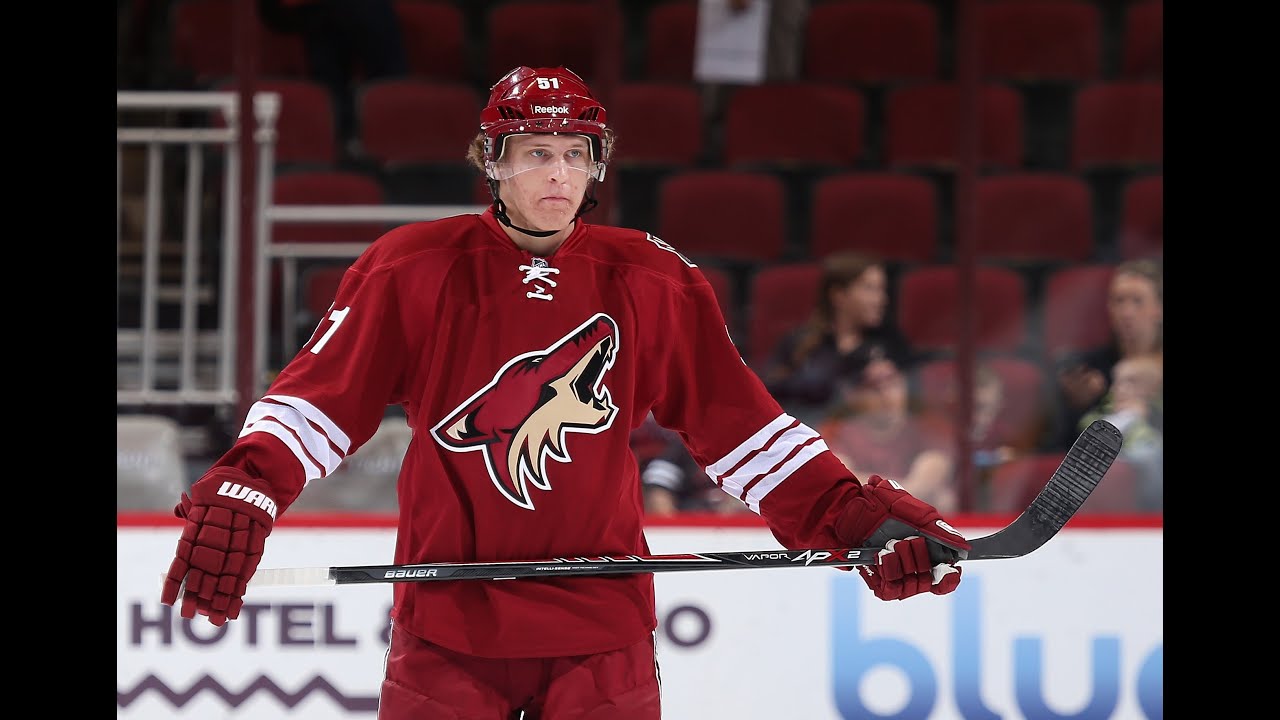 With fellow Arizona prospect Dylan Strome also nearly a sure bet to crack the NHL lineup this fall, the Coyotes’ centre depth could see a significant overhaul from using Martin Hanzal and Antoine Vermette as their top two pivots last season. Dvorak’s mature and responsible two-way game is likely to earn head coach Dave Tippett’s trust early in the season. With a plethora of skilled young wingers at his disposal, Dvorak has a chance to be one of the league’s best rookies if he’s given plenty of ice time for a Coyotes squad on the rise.