The Montreal Canadiens are riding a wave of success unforeseen by many. The Habs found themselves out of a playoff spot on many experts’ predictions. With analytics piercing the mainstream in the off-season, many kept a close eye on Corsi numbers and discarded the Canadiens for their poor possession stats figures.

Yet, with only 16 games left to play in the season, the Montreal Canadiens are first in their division, first in their conference and third in the league, a single point behind the Anaheim Ducks and the Nashville Predators.

Some try to explain what’s happening with absolutes. The most popular being; Carey Price is carrying the team. People who deal in absolutes let subtleties fall by the wayside.

Truth is, as strong a goalie Carey Price is, he is more akin to Martin Brodeur with the New Jersey Devils than Dominic Hasek with the Buffalo Sabres. Surrounded with a good, efficient forward corps of forwards, a talented defense, all playing within the confines of defense-oriented game plans.

On paper, David Desharnais isn’t your typical first line centre. Without the hype of being a high draft pick, or even a draft pick at all, Desharnais worked his way through the Cincinnati Cyclones of the ECHL and the Hamilton Bulldogs of the AHL before breaking the Montreal Canadiens’ line up in 2011 where he put up 22 points in 43 games.

A portion of the Habs’ fan base have been waiting for the other shoe to drop ever since.

Undrafted and considered too small by NHL standards, Desharnais has been on the Montreal Canadiens’ top line for the past three seasons.

An Advanced Look At Desharnais

With the help of advanced stats, we can take a more precise look at how a player is performing. Corsi will not be used in this piece. The logic behind possession metrics is that the more you own the puck the better your chances at scoring goals and winning games. Corsi and Fenwick compile shots that missed the net and in Corsi’s instance,blocked shots.

The Montreal Canadiens are not playing a possession game, they are playing a transition game, if you follow the Habs closely then you’ve seen it before. The Habs will clog the neutral zone until they see an opening and strike. It is more obvious when the third line is on the ice and face the opponent’s bottom 6/defense pairings. The number of breakaways Brandon Prust had so far this season is a lot higher than any third liner should ever have.

The Habs are 23rd in the league in CorsiFor% but third in the league’s standings. Instead of focusing in goals that might or should occur let’s focus on those that have with GoalsFor% numbers. The Montreal Canadiens are fifth in GF% and the GF% stats as a whole is much more representative of what’s actually happening on the ice.

Here are The Montreal Canadiens GF% numbers compared to some of the best teams in the league. 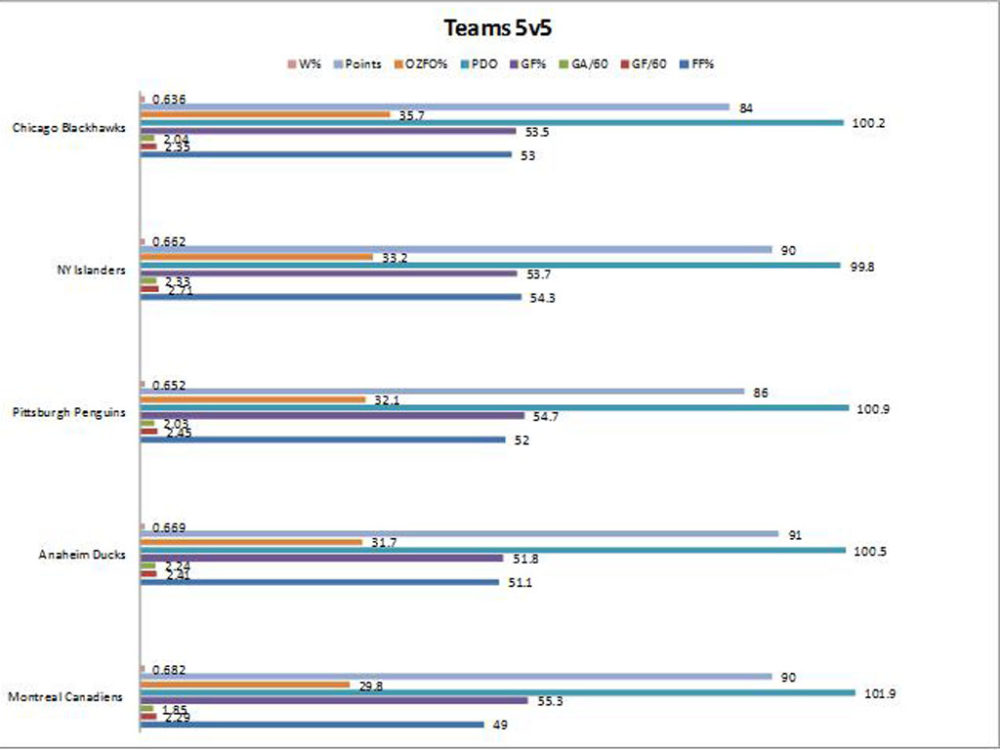 As you can see, the Montreal Canadiens have the lowest possession numbers but they have the highest Goals For % and incidentally the best Win %. It’s not about how much goals were scored, it is about the balance of goals. How many goals scored were not reciprocated.

Before comparing Desharnais to other players in the league, let’s compare his numbers at 5v5 close zone adjusted to the other centremen on his team. 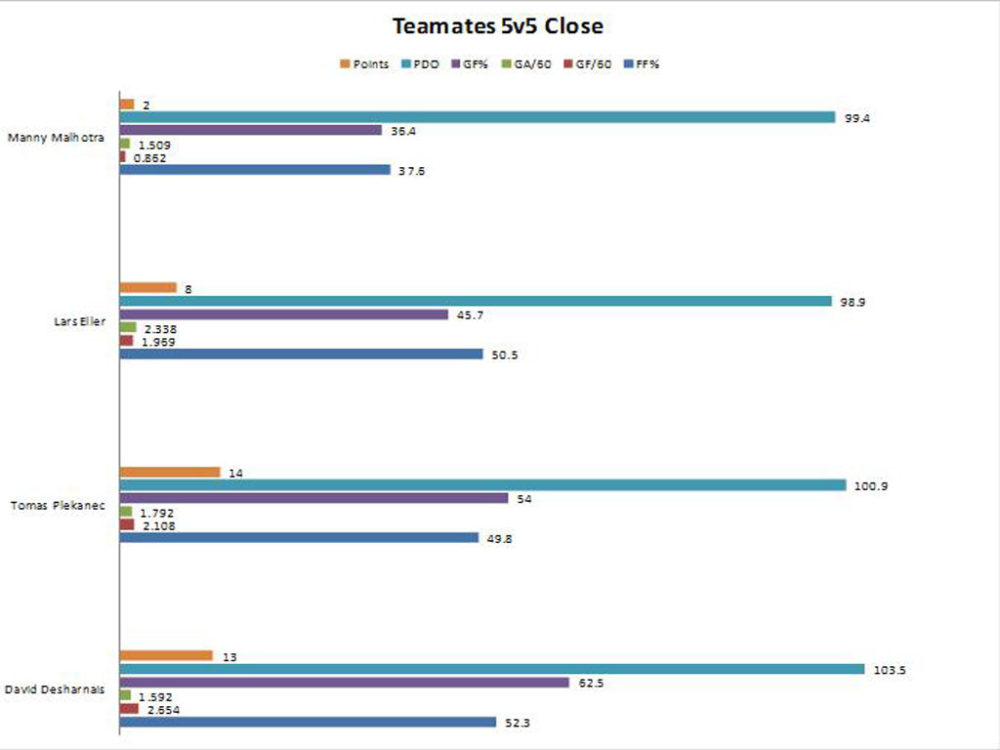 These players all play on the same team, with the same coach, and the same goaltender yet their numbers are different. GF% is a productivity ratio. Although he has one more point, Plekanec GF% is lower. Fifteen minutes of Desharnais will produce better offensively for the Montreal Canadiens than fifteen minutes of Tomas Plekanec. Basically what that means is that Plekanec’s points are more likely to come on the second goal of a four goal win as opposed to Desharnais’ whose points are more likely to come on game-tying/wining/leading goals.

There were no clear-cut first line centre at the beginning of the season. Desharnais started the year and then was sent on the third line’s left-wing when Alex Galchenyuk took over as first line pivot for fifteen or so games until Plekanec took over for almost ten games. Desharnais has come back to the first line because he produces better. As those numbers just showed.

Here are Desharnais’ advanced GF% compared to some of the best centres in the NHL. 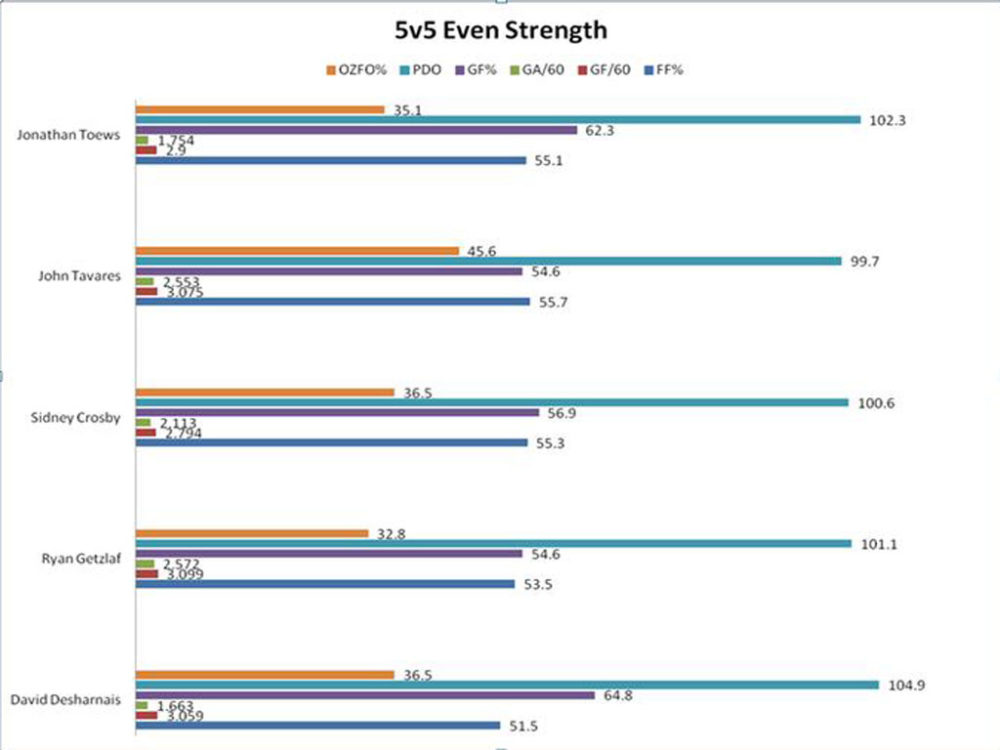 At even strength, even compared to the NHL’s elite, David Desharnais is not blown out of the water. As mentioned before, The Montreal Canadiens aren’t a possession team which explains the high PDO – shooting% + saves% –  but still maintains a respectable 51.5 FF%.

Often, Michel Therrien is criticized for sheltering Desharnais. In this instance, tied for third with Sidney Crosby, David Desharnais’ usage is on par with other NHL first liners.

Those numbers show that Ryan Getzlaf is this season’s most complete centre. David Desharnais is the most proficient offensively as 64.8% of the goals being scored when he is on the ice were not scored back by the opposition. Sounds crazy but the Montreal Canadiens have only allowed 96 goals in 65 games this season. Speaking of low scoring games… 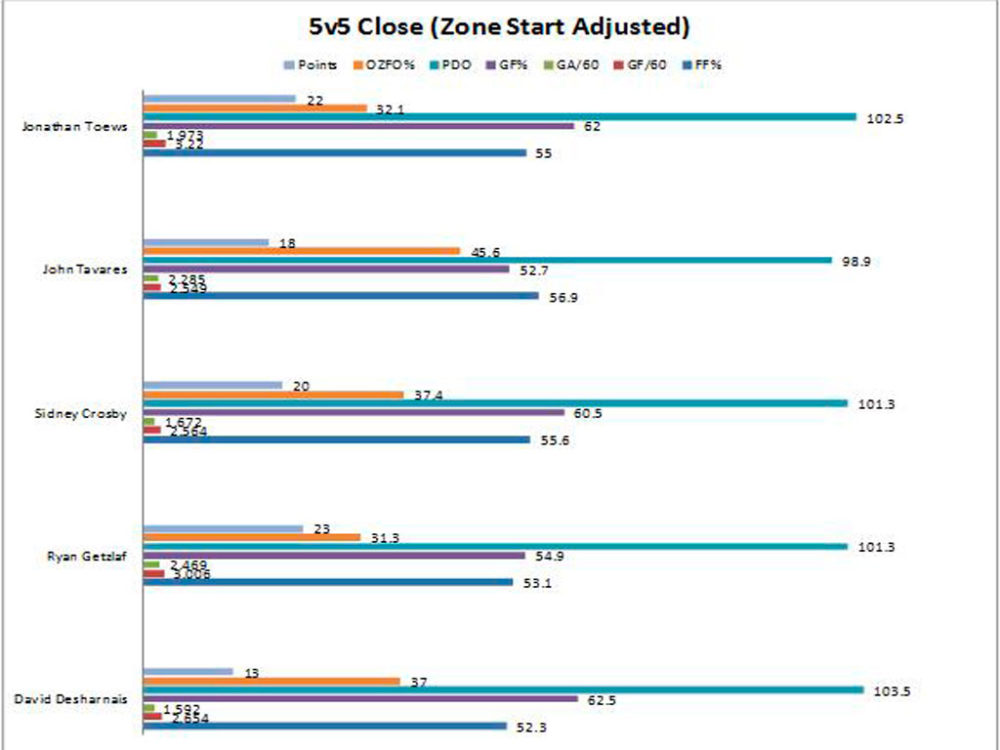 These numbers state the obvious. Desharnais is not as complete a two-way player as Toews or Crosby but better defensively than John Tavares. His GF% is again the highest. Last in points but Desharnais is the third most productive per 60 as he is the least likely to get scored on. When the game is on the line and could go both ways, Desharnais can be counted on to produce without hurting his team’s chances. In crucial moments, Desharnais can play.

Before someone points out that Max Pacioretty is likely the cause of those numbers I would invite you to look at those team’s rosters and see who the other centremen play with.

When advanced stats became more popular, the analogy most often used was that of the movie Moneyball. David Desharnais is the epitome of that kind of management.

David Desharnais, a 5’7, undrafted player who was picked out of the minors that can do nearly as well as the league’s best at a fraction of the salary. Desharnais’ $3.5 million cap hit is a fraction of Toews’ $10 million cap hit next year. He ought to be the poster boy for advanced stats. He has been consistently performing well on one of the league’s best teams for the past three years and shows no signs of stopping. David Desharnais is without a doubt an NHL first line centre.