The 2016-17 season was a good one for David Farrance who displayed his offensive prowess in the USHL. In 25 games, the defender scored one goal and 17 points thanks in large part to his tremendous offensive instincts. Additionally, Farrance posted seven goals and 37 points in 64 games with the US National U-18 Team. Highlighted by his smooth skating, solid vision and skilled hands, Farrance is a good mobile defender who has no issue carrying the puck out of his own end and through the neutral zone. 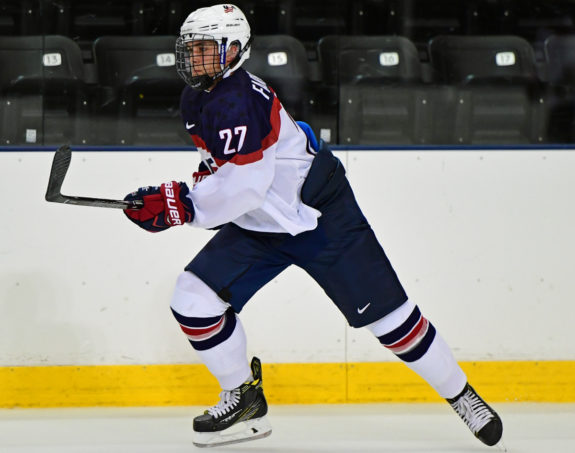 Though Farrance is proficient in the offensive side of the game, his defensive ability isn’t entirely hindered as a result. Knowing when to join the rush and when to drop back into coverage, Farrance makes good judgment calls in most situation. Still, that doesn’t mean his defensive ability is without flaw. Due to his 5-foot-11, 189-pound frame, Farrance isn’t the most physical player on the ice. He doesn’t play as hard against the boards as he should and will need to work on fine-tuning his game before ever having a chance at making the NHL.

Having the ability to quarterback a powerplay is a valuable asset in the modern NHL, however, and if he can get his defense to be passable at the next level, his offense should be enough to get him drafted in the early stages of the NHL Draft. Committed to play at Boston University next season, Farrance has the potential to refine his skills in one of the best collegiate programs in the country.

Though Farrance will all but certainly not be taken in the first round of the 2017 NHL Entry Draft, his name has popped up as a potential second round pick by Craig Button who ranked the Victor, New York-native 56th on his draft board. Still, the most likely outcome will be Farrance hearing his name called in the third round of the draft, somewhere between picks 70 and 80.

“Under six-foot defender who is a mobile defenseman with terrific offensive skills and high-end passing skills. Displays excellent vision and has the ability to throw the home run stretch pass to a teammate with accuracy. Very good on the power play at moving the puck to the right option. Quick and precise in retrieval in his end, and a power play generator who reads his passing options but also has a rocket from the point.” – Bill Placzek

Farrance is still a very raw prospect, but he does possess all the tools needed to succeed at the NHL level if he can put it all together. With tremendous offensive ability as displayed by his pin-point, tape-to-tape passes, smooth skating and a good shot, Farrance has the ceiling of a top-four defender. If his defense never rounds out the way it needs to, he could find himself playing in a bottom-pairing role as an offensive specialist who receives sheltered zone starts and a permanent role on a power play.