Our friends over at Merriam-Webster define déjà vu as “the feeling that you have already experienced something that is actually happening for the first time.” For fans of the Anaheim Ducks entering the 2016-17 NHL season, that familiar feeling is one they are hoping for come the time the Stanley Cup is raised in June of 2017.

Bob Murray decided a change was needed when the Ducks skated off Honda Center’s ice on April 27 of this year to the hands of the Nashville Predators. Unfortunately for Murray, a promise to shake things up could not come in the form of a trade of one of his superstars in Ryan Getzlaf and Corey Perry, who simply have not performed in the playoffs of late. Losing four straight times on home ice, in Game seven, is simply unacceptable. Blame the coach all you’d like, but the Ducks superstars have not been earning their salaries.

Be that as it may, someone had to take the fall.  The ax happened to swing and land on Bruce Boudreau. On April 29, 2016, the Ducks announced the firing of Boudreau, leaving behind a winning percentage of almost 60% with the Ducks. However, as we all know in sports, the only thing that matters is winning in the playoffs. Win 82 games during the regular season, but if you don’t take home the Stanley Cup, it was still a disappointing year. Fortunately for Anaheim Ducks’ fans, success under Boudreau has led to increased expectations of another chance at glory. The question remains: can they get back there?

Changing of the Guard

On June 14th of this year, the Ducks announced the re-hiring of the man who led them to the 2007 Stanley Cup Championship in Randy Carlyle. At least from his press conference, Carlyle was saying all the right things: 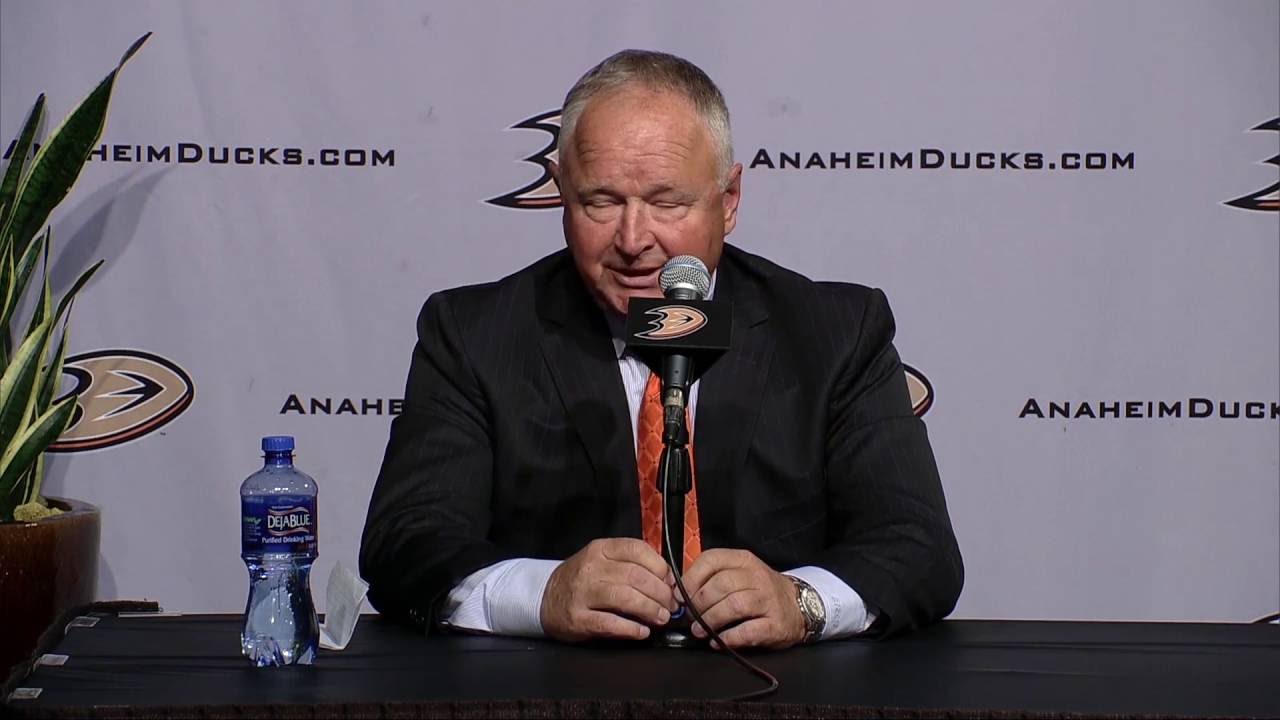 The big question remains: why bring him back? This tweet may provide an answer:

Under Carlyle, the #NHLDucks won 36 playoff games and were 11-6 in playoff elimination games.

Teemu Selanne certainly was happy about the move:

Ryan Whitney on the other hand:

This should work out well. No one could stand the guy when he got fired in Anaheim before and now he'ssssssss back https://t.co/3TIWik2Gzn

Selanne, if you recall, blasted Boudreau after his final NHL season. Whether what he said was justified or not, clearly things did not go over well between the Finnish Flash and now ex-coach.

Carlyle certainly brings experience, a Stanley Cup pedigree, toughness, and accountability back to the organization that may have slipped with Boudreau there. Boudreau is more of a player’s coach, who Ducks players credited with bringing a breath of fresh air into the locker room after Carlyle’s tactics wore thin. However, this day and age brings about a new NHL. Gone are the days when a coach can roll out Brad May, Shawn Thornton/George Parros, and Ryan Carter for four to five minutes and hope they crush some people. Hockey analytics is here and is here to stay, and these stats show that something had better change for the Ducks to be successful this year. A look at the third part on this list shows you what happened once Carlyle left. So Ducks fans, is there reason for optimism?

One can easily say that making the playoffs with the Toronto Maple Leafs of late automatically makes you a pretty dang good coach, as they have made the playoffs only once in the last 11 seasons. Looking at the analytics, one can say it does not matter that he made the playoffs, fortune simply smiled upon him that season. The bottom line is, once Carlyle’s teams get to the playoffs, they are dangerous. They say a team usually takes on the personality of the head coach, and Carlyle’s teams certainly reflect that. Hard-nosed, aggressive, and ugly is exactly what you need to win in the playoffs.

Gone are Scott Niedermayer, Chris Pronger, Teemu Selanne, and J.S. Giguere. Here are Hampus Lindholm, Sami Vatanen, Jakob Silfverberg, and John Gibson. The Ducks defense is young, and very, very good. Their forward depth is questionable.  Can Carlyle push the right buttons and make these Ducks fly? Or will this team be a puck-possession disaster and have their wings clipped? For Anaheim Ducks fans, one can only hope that a year off from the game has brought perspective, change, and a new attitude that will result in another video like this: