Patrick Roy.  Jacques Plante.  Martin Brodeur.  Ken Dryden.  Glenn Hall.  The list of superstar Canadian goalies of the past could go on forever.  It could be argued that nine of the top ten goaltenders in the history of hockey are all Canadians, with Dominik Hasek being the obvious exception.  For the first 135 years of the game’s history that dates back to 1875, Canada has boasted the best goaltenders.  But in the past five years, all of that has changed.

For the country that has always had the cream of the crop to choose from for national team duty, the position is suddenly surrounded by questions.  At all levels, Team Canada is facing a dilemma that could cause them to change the way that they develop and coach players.  This concern hasn’t fallen on deaf ears in Canada, where the CHL (which consists of the QMJHL, WHL, and OHL) has banned European goaltenders from its import draft starting in 2014.

Around the year 2008, Canadian goalies began to fall behind goalies from hockey powers Sweden, Finland, the United States, and Russia.  The graph below shows the save percentage of goaltenders from those hockey powers, which are added once goaltenders from their country had 175 NHL appearances in a season.  As you can see below, Canadian goalies regularly beat out their American counterparts in save percentage until 2007-08.  In every year since, American born goaltenders have combined for a higher save percentage than Canadian goalies in the NHL.  Finland has enjoyed similar success over that time period, and some even before the US.  Sweden has had some mixed results, but have generally outperformed Canadian goalies since they started playing in significant numbers in the NHL in 07-08.  The Russians started out strong but have fallen back towards the pack in recent years, mostly because Evgeni Nabokov is no longer putting up great numbers on a regular basis. 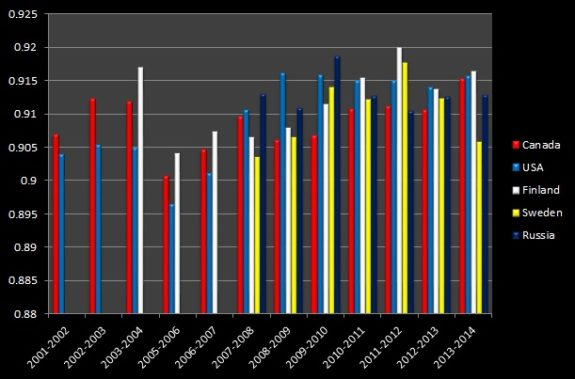 After the lockout that cancelled the 2004-2005 season, you can see a sharp decline in save percentage.  This is due to the new rules implemented designed to increase scoring and bring the NHL out of the Dead Puck Era.  Many more power plays were given per game, and less clutching and grabbing was allowed.

It is true that Canadian goalies have the largest sample size among all of the countries, but that number has been decreasing every year.  Canadian goalies played 75% of the games in 1992-93, but that number shrunk to just 37% in 2011-12.  You would have thought that as more quality European and American goaltenders played in the NHL, weaker Canadian goalies would be pushed out, and top Canadians would remain, keeping their numbers better.  But, this has not been the case.  Not only are Canadians playing less, but they are being outplayed.

The last five Vezina Trophy winners have been non-Canadians, with the last Canadian winner being Martin Brodeur in 2007-08.  No Canadians were finalists for the trophy in the past two years.  Just two Canadian goalies have been named to postseason all star teams in that time frame; Steve Mason and Martin Brodeur on the second team.

Since NHLers were given permission to play in the Olympics in 1998, Team Canada has had few questions in goal.  After all, when you have Martin Brodeur and Patrick Roy to turn to, you tend to not ask questions.  But heading into the 2014 Olympics, goaltending is by far the biggest question mark surrounding the team.  During the summer, Team Canada invited five goalies to their Olympic Orientation Camp:  Corey Crawford, Mike Smith, Braden Holtby, Roberto Luongo, and Carey Price.  Their collective saver percentage this year is .918, slightly above the league average of .914.

So far this season, none of the invitees has taken the bull by the horns and won the job right now.  Right now, the frontrunner appears to be Carey Price, who has performed the best of the group this season with a 2.26 goals against average, and .927 save percentage.  For what it’s worth, Martin Brodeur thinks that Roberto Luongo should be the starter.  Luongo has been solid this season, but his recent failures in big playoff games have made some wary of making him the Olympic starter.  Even though he was in net when Canada won gold in 2010, he did not look comfortable, and was fighting the puck all game.  The other invitees haven’t done anything to inspire confidence this season; Smith, Crawford, and Holtby are all below the league average in terms of save percentage, and Holtby and Smith have GAAs around 3.

Marc-Andre Fleury and Josh Harding have probably been the two most impressive Canadian goalies this year.  But, they are not without their faults either.  Fleury has been downright awful in the playoffs the past few years, and Harding has never been a full-time, workhorse goalie in the NHL.  The most games he’s ever played in a season is 34.  Right now, my guess is as good as anyone’s as to who the Canadian goalies will be.

Canadian Goalies at the World Juniors

The root of Canada’s goaltending problems comes from their inability to develop elite goaltending prospects.  They have no heir apparent to Martin Brodeur because, with the exception of Price, Canadian goalie prospects have failed to develop into elite players.  This effect can clearly be seen with Canada’s failure at the World Juniors in the past five years.  The graph below shows the save percentage of goalies by country for the last nine years of the tournament.  In the first three years, Canada killed the competition.  But like the NHL save percentages, a shift becomes evident around 2008 and 2009 where not only does Canada decline, but the other countries get better.  This is despite the fact that Canadian goalies are playing behind by far the most talented group of defensemen in the tournament every year.  Now a few years later, the other hockey powers are reaping the benefits of strong goalie development, and Canadian goalies are being left behind. 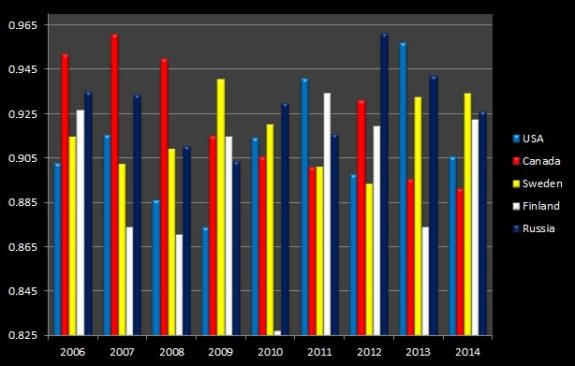 How have the other countries done it?  They’ve devoted significant time and effort into developing goaltenders.  They’ve made a concerted effort to train more goalie coaches, and give goalies more attention in terms of coaching.  The results at the NHL level have been undeniable.

Canada’s recent goalie struggles at the World Juniors are very well known, with Zach Fucale and Jake Paterson turning in lukewarm performances at best en route to a second consecutive tournament without a medal.  You cannot win the World Juniors without good goaltending.  John Gibson single-handedly stole games for the United States last year, and carried them to a gold medal.  Just like in the NHL, Canadian goalies are no longer receiving award recognition.  A Canadian goalie hasn’t been named Best Goalie since Steve Mason in 2008.  By Canadian standards, the only good goaltending performance they have had since 2008 was Mark Visentin in 2012.

It is undeniable that Hockey Canada has a problem on their hands.  To fix it, they’ll have to devote significant resources to developing goalies in order to keep up with the rest of the world.

1 thought on “The Demise of Canadian Goalies”