Coming into the playoffs, the Detroit Red Wings wanted to do everything possible to avoid a letdown after such a strong finish to the regular season. Unfortunately, offense is what let Detroit down on Saturday night at Joe Louis Arena against the Anaheim Ducks. However, much can be learned from this game and it provided a window as to how the rest of this series will be played. The Red Wings need to focus on three areas of their play if they are to have success against a gritty Ducks team.

All of the goals scored in game 1 were scored on the power play, with the exception of the empty netter scored by Francois Beauchemin. This trend continued on Thursday, when the man advantage proved to be explosive for the Ducks. It’s common knowledge that a power play is a dangerous beast when the playoffs come around, and this game was the perfect example of this. The 2013 Stanley Cup playoffs for the Red Wings should be treated as a chance to take advantage of every single opportunity afforded them. They earned the right to play, now it’s up to the team to decide the effort and intensity.

Every single power play should be treated as a huge opportunity to score a goal. In game 1 (despite picking up a power play goal), the man advantage struggled to keep the puck in the zone, took unscreened shots from the point  and scored once on four chances. The Red Wings were a miserable zero-for-seven on the power play in game 3.

Zero-for-seven at your home rink is flat-out embarrassing.

The Red Wings power play works best when Johan Franzen can get the job done down low. This starts with strong outside passing by blueliners like Nicklas Kronwall (above) who often quarterbacks the power play. Once the passing lanes open up, the Mule is fed and the puck goes in the net. 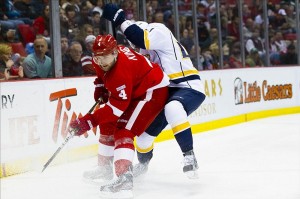 In the playoffs, everyone is a goalie when they are on the ice. Shot blocking and “effort play” go hand in hand, and this is  a stat that is often overlooked. Currently, Jakub Kindl and Brendan Smith are tied for the lead for the shot blocking award (if such an award is given) on the Red Wings, with five blocked shots each.  The trio of Franzen, Abdelkader and Kronwall all have four blocks each.

The Red Wings top six forwards need to take a lesson from these players, Henrik Zetterberg has yet to block a shot in the playoffs, and he is even on the plus/minus scale. Jonathan Ericsson has blocked a whopping one shot in the post season, ranking last amongst Red Wings defencemen.

Although it may be a bit painful, the rewards of shot blocking are many. Jimmy Howard is under much less pressure when shots are blocked with authority, and the random way the puck bounces after deflecting off of a body often opens up breakaways and odd-man rushes.

The penalty box in game 3 can best be described as a revolving  door. The teams combined for 14 penalties, including a five minute major/game misconduct assessed. The Ducks blew the door open when they scored on the five minute major. Even though Detroit killed off the rest of the penalty, they still kept themselves in hot water for most of the game and were hampered by costly and useless penalties.

If Justin Abdelkader (above) is suspended for any length of time, the Red Wings will have some serious issues. After the loss of young Dan DeKeyser on the back end, losing Abdelkader on the top line would force Mike Babcock to juggle some lines in ways that have not been seen since about the middle of the season.

After studying the hit, my personal opinion is that Abdelkader did not leave his feet before initial contact was made and it would be ridiculous to suspend him.

What it comes down to is playing a responsible and effort driven game. Most penalties occur from mental lapses and breakdowns in schemes and systems. The elimination of such mistakes will keep the Red Wings off the penalty kill and on the path to victory against Anaheim.