DETROIT — Andreas Athanasiou scored in the third period and had the only goal in a shootout, lifting the Detroit Red Wings over the scuffling New York Rangers 3-2 on Thursday night to snap an eight-game losing streak.

Tyler Bertuzzi also scored and Jimmy Howard made 32 saves for the Red Wings, who ended their longest skid of the season. 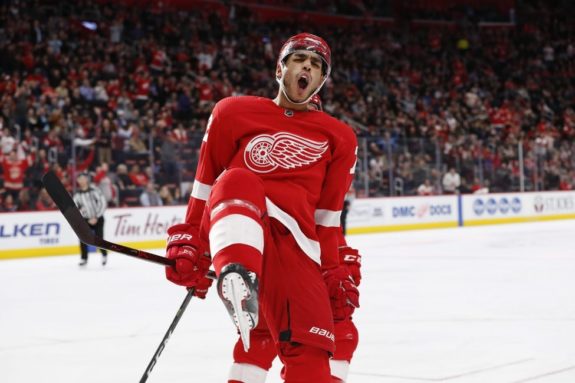 Detroit played without leading scorer Dylan Larkin and top-scoring defenceman Mike Green. Larkin was out with a back injury and Green will miss the rest of the season because of a virus.

The Rangers have lost a season-high six straight.

New York’s Pavel Buchnevich made it 2-all with 5:31 left in the third by scoring his second goal of the game on a breakaway.

Athanasiou put the Red Wings ahead at 6:15 of the third. He had a chance to do it again late in regulation, but missed the net after putting the puck between his legs. Henrik Lundqvist prevented Athanasiou from scoring midway through overtime, but couldn’t deny him in a 1-on-1 situation in the shootout.

Athanasiou previously beat Lundqvist with a shot from the inside of the right circle, scoring on a 2-on-1 set up by saves at the other end of the ice by Howard and defenceman Danny DeKeyser. Howard stopped Brett Howden’s shot and DeKeyser prevented Tony DeAngelo from scoring off the rebound.

Lundqvist made 43 saves and some were spectacular, including a stop that prevented Bertuzzi from scoring a second goal to give the Red Wings a two-goal lead midway through the third period.

Buchnevich broke a scoreless tie midway through the first period in which Lundqvist stopped each of the 14 shots he faced. Bertuzzi redirected the puck past Lundqvist early in the second, standing with his back facing the net.

NOTES: The Red Wings played their first home game since Hall of Famer Ted Lindsay died on Monday. There was a long moment of silence for Lindsay before the game and during it, players honoured him by tapping their sticks on the ice as the crowd stood and cheered. A visitation for Lindsay is scheduled at Little Caesars Arena on Friday from 9:07 a.m. to 7:07 p.m., with starting and ending times that are a nod to his No. 7 jersey. … Rangers D Marc Staal was in the lineup after being questionable with the flu. D Kevin Shattenkirk was a healthy scratch. … Detroit recalled C Christoffer Ehn from the AHL’s Grand Rapids Griffins and played him on the fourth line.