DALLAS — Alexander Radulov recorded his first career hat trick in his return after missing the previous game for disciplinary reasons, and Ben Bishop stopped 31 shots in his second consecutive shutout as the Dallas Stars beat the Colorado Avalanche 4-0 on Thursday night.

Jamie Benn added his 25th goal of the season for the Stars, who hold the first wild card in the Western Conference. Benn also assisted on Radulov’s first goal.

Radulov scored once in each period, including an empty-net breakaway with 2:58 left in the game. That gave the 32-year-old Russian his first hat trick in his six NHL seasons, and he now has 20 goals this season. 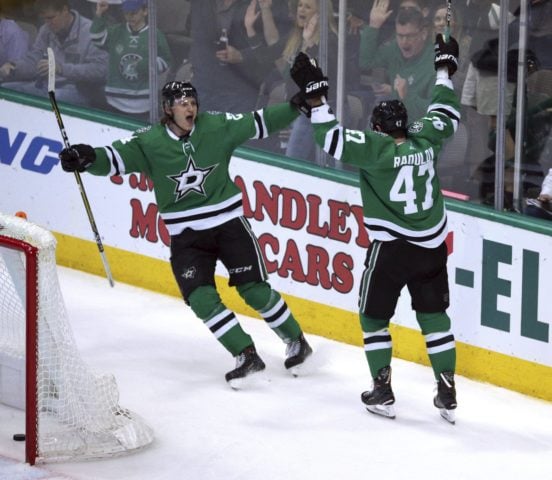 With its fourth win in a row, Dallas has 75 points and moved five points ahead of the Avalanche, who started the night the first team out of the second wild card.

Radulov was a healthy scratch by coach Jim Montgomery and didn’t play in the Stars’ 1-0 home win over the New York Rangers on Tuesday after he arrived late for the morning skate. He was also benched for part of a period earlier this season.

Bishop got his 29th career shutout, and has held consecutive teams scoreless for the first time in his 362 career games over 11 NHL seasons. He had 28 saves in that win against the Rangers and has gone more than 124 minutes since giving up a goal.

Benn scored on a one-timer after Jason Dickinson regained control of the puck after his shot was rejected by Varlamov. Dickinson was behind the net when he passed to Benn, who had a hat trick Saturday in St. Louis.

NOTES: Varlamov had 26 saves. He was replaced by backup Philipp Grubauer for a few minutes in the third period when he had to leave the ice to take care of a skate issue. He did return to the game. … Stars F Andrew Cogliano was back in the lineup after missing three games with an upper-body injury. Cogliano, acquired from Anaheim in a trade in mid-January, had never before missed games because of injury in his 12 NHL seasons. … Dallas F Radek Faksa (neck) didn’t play. He missed the final 10 minutes Tuesday after getting into the boards on a play that drew a game misconduct penalty.

Avalanche: Host Buffalo on Saturday in the first of four consecutive home games.

Stars: Play their third home game in a row, Saturday against Chicago.