Not much has gone right for the Detroit Red Wings this season. However, some of their prospects have kicked off the 2018-19 campaign with a bang.

We’ve already seen Dennis Cholowski take charge of Detroit’s power play plus Michael Rasmussen stick with the team now that most of the regulars have returned from injury. But what about the up-and-coming players in Grand Rapids, juniors, and college?

In this week’s edition of The Grind Line, The Hockey Writers’ Red Wings coverage team shares their pick for which prospect is off to the best start – Cholowski and Rasmussen excluded.

Related: 42 Red Wings Prospects & What to Know About Them

So far, Petruzzelli has started six of the team’s seven games and won all but one, including a 21-save shutout against No. 18-ranked Boston College at home. The goose egg was the first of the netminder’s NCAA career. And thanks to Petruzzelli’s stellar play in net, Quinnipiac now holds the No. 15 ranking for college hockey.

Petruzzelli sports a 2.17 goals-against average and a .907 save percentage – an improvement over his freshman year statistics. The towering goaltender has sealed off the bottom of the net well and his lateral movement, whether butterfly-sliding or pushing across on his skates, has been on point. Overall, he looks very controlled in the crease and confident in his game.

Moving forward, the sophomore should continue to earn a bulk of the starts given his recent play. After goaltending partner and Flyers prospect Andrew Shortridge appeared in more games than Petruzzelli last year (25 to 17) and outperformed the then-freshman, Detroit’s potential goalie of the future looks to have solidified his standing as the school’s No. 1 netminder. Starting a majority of the team’s games against top competition will do wonders for Petruzzelli’s development.

Related – Red Wings Goalies: A Deep Dive Into Their Goals Against

Since slipping to the Red Wings at 30th overall in June’s draft, Joe Veleno has continued to show he’s the organization’s top prospect. While Filip Zadina (sixth overall, 2018) received all the hype in Hockeytown, Veleno was the one who tore up the Traverse City Prospects Tournament before putting in a strong, albeit quick, training camp in Detroit. 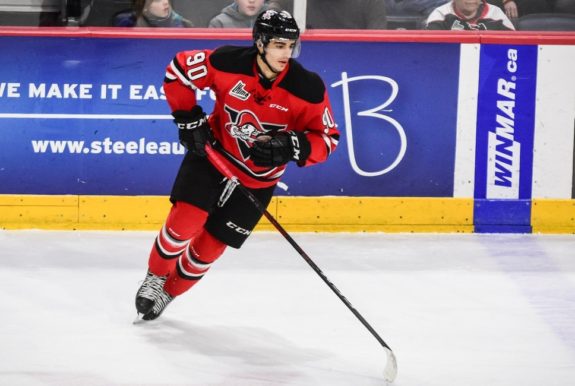 Joe Veleno has lit it up for Drummondville this season. (Shawn Davidson/QMJHL)

Through no fault of his own, he was a relatively fast cut in camp, largely due to the plethora of forwards and other prospects that the team favored more. It was no surprise to see him loaned back to Drummondville of the QMJHL, allowing him to hone his all-around game as an 18-year-old entering his fourth season of juniors after being granted “exceptional player status” in 2015.

Heading into the draft, Veleno was criticized for having a lower offensive ceiling than other prospects, even after finishing 10th in scoring last year. He had totaled 48 goals and 114 assists for 162 points in 171 games (QMJHL scoring leaders often eclipsed triple digits in a single, 68-game season).

Even with a scouting report of a lower ceiling, Veleno’s complete, 200-foot game is astounding and will go a long way for a Red Wings team in need of center depth. Moreover, since getting a taste of the professional ranks, he’s found another level.

Through 16 games this season, Veleno has recorded 11 goals and 11 assists for 22 points, placing him 17th in league scoring. He’s on pace for 46 goals and 93 points, a pace strong enough for another top-10 and possible top-5 scoring finish.

Veleno has the makings to be a top-six center in the NHL and could find himself lining up behind Dylan Larkin as soon as next season.

Christoffer Ehn was drafted in 2014 by the Detroit Red Wings No. 106th overall. Since then, he’s been working his way through the Swedish leagues as he prepared for his pro debut. 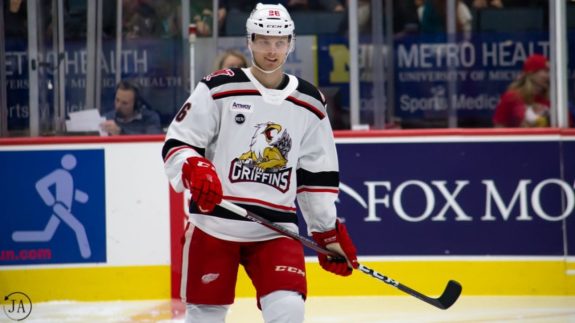 After a brief stay in Detroit, Christoffer Ehn is back in Grand Rapids with the Griffins. (Jenae Anderson / The Hockey Writers)

Ehn only just recently joined the AHL’s Grand Rapids Griffins, but he hasn’t wasted any time getting on the board. Putting up his first pro goal and a three assists in his first five games as a Griffin has put Ehn in a good position. Beginning his season with the Detroit Red Wings, skating in nine games, he tallied an assist to kick off his first season as a pro.

Though Ehn is not one of the “superstars” that put up 20+ goals a season, he has incredible promise. He spent his entire career until this season skating in Sweden with Frolunda where his long legs became accustomed to the wide ice surface. I spoke with Ehn following a game, and he told me, “You just got to listen and try to adapt as fast as possible… You learn stuff every day on the ice out there. I feel like the process so far has been pretty smooth.”

Given his ability to adapt, he’s proving to be a fast skater and has the ability to play center and cover a wing if necessary which will open up a lot of versatility going forward. He only had 17 points last season in the SHL, surrounded by veterans and several league-leading scorers at his disposal, Ehn will have the chance to learn from them.

Detroit has a lack of centers currently and only have select few inching through the systems – Ehn will be among them. He’s got a developing two way game – being defensively smart and offensively promising.

Which Detroit Red Wings prospect are you most excited about? Comment below with your thoughts.