What’s The Grind Line? Apart from the once-famous line of Kris Draper, Kirk Maltby, and either Joe Kocur or Darren McCarty, The Grind Line is also The Hockey Writers’ weekly column about the Detroit Red Wings. Rachel Anderson and Tony Wolak are the muckers who makeup THW’s forechecking unit and sound off on Red Wings topics. This week, we’ve also added guest contributor, Brandon Share-Cohen.

Not much has gone right for the Red Wings this season, but there are a few positives to take away. One example of which has been their willingness to give younger players the ice time necessary to grow.

So as the 2018-19 season winds down and we begin thinking about 2019-20, it’s only fitting that Filip Zadina’s role is expanding. After playing just over ten minutes in his NHL debut, Detroit’s 2018 first-round pick now finds himself earning top-six and power play minutes. Plus, he has Jeff Blashill’s trust – a rare occurrence for someone just entering the league. 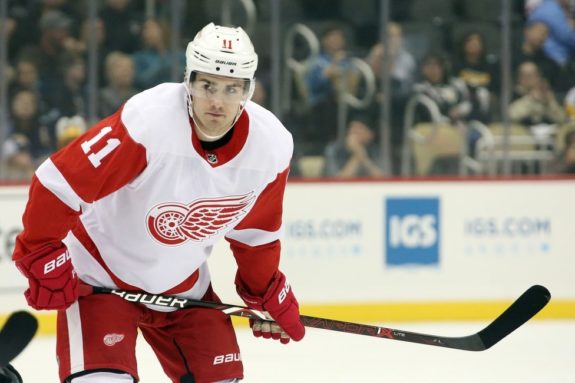 But what about next season when the Red Wings ideally are a more competitive team? In this week’s edition of The Grind Line, The Hockey Writers’ Red Wings coverage team identifies Zadina’s ideal spot within the organization once the 2019-20 campaign kicks off in October.

It should not be lost that the Red Wings haven’t had a first-round draft pick suit up for the big league squad in his draft-plus-one year since Martin Lapointe during the 1991-12 campaign. Zadina earning a call-up after dominant AHL play is a fantastic accomplishment for not only him, but the organization as well. 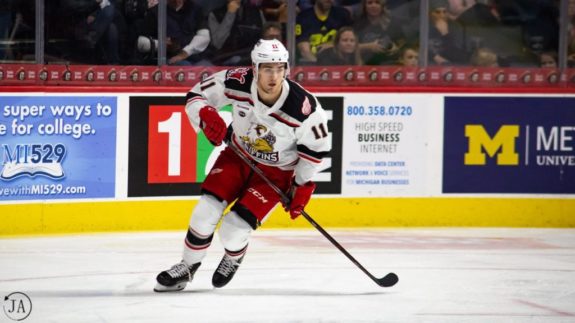 Filip Zadina started slow in Grand Rapids, but found his footing and became a threat every night for the Griffins. (Jenae Anderson / The Hockey Writers)

Through seven games, Zadina’s Red Wings cameo has been an impressive one, despite what the stats say (two points, none at even strength). Playing on a line with always-responsible Frans Nielsen and Thomas Vanek seems like a natural fit and may be an early indication of what’s to come next season. Vanek may not be around, but a middle-six role flanking Nielsen and an offensive-minded wing would help Zadina elevate his game to the next level.

Of course, Zadina first needs to get stronger and come to camp hungry for an NHL spot. He’ll need to follow in Tyler Bertuzzi’s footsteps – build off a solid Red Wings cameo, hit the gym hard over the summer, and stake his claim in the fall. And as we’ve seen with Bertuzzi, commitment to said plan can pay serious dividends.

Zadina has done well with the ice time he’s been given so far in Detroit, especially so early in his career.

Soon, he will be reassigned to the Grand Rapids Griffins in time for their playoff run, which will be a crucial time of growth for him. He needs a bit more time developing and adapting to the demands of pro playoffs. 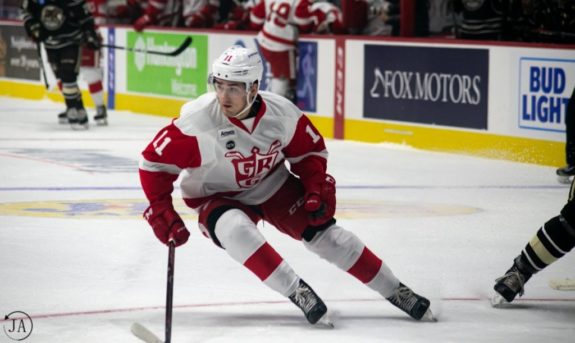 Additional time with the Griffins would bode well for Filip Zadina. (Jenae Anderson / The Hockey Writers)

Looking at the 2019-20 season, the Red Wings will be faced a logjam up front, with youngsters Michael Rasmussen and Evgeny Svechnikov (set to return in approximately two weeks) needing ice time. Considering that, Zadina will have to have an incredible playoff run with the Griffins this season, an outstanding summer, and a stellar training camp to earn his place on the roster full-time.

Up to this point, I don’t believe his game has been strong enough to earn a roster spot to start the 2019-20 season. I think Detroit will keep him in Grand Rapids and, if he proves to be consistent and play smart, it is my belief he’ll get pulled up a few months into the campaign, just like Anthony Mantha a few seasons back.

No doubt, Zadina is going to be a superstar in the NHL. While he didn’t step in immediately to an NHL role and prove that he could be a legitimate top-line scorer as many (myself included) expected, he’s still got the highest upside of any player in the Red Wings organization.

This isn’t discounting Mantha, Dylan Larkin, Andreas Athanasiou, Joe Veleno, Michael Rasmussen, or any of the other numerous high-potential players in the organization either. In fact, it’s acknowledging how good they are and can be, and maintaining that Zadina could in fact be better.

With one goal and two points in seven games in the NHL and 15 goals and 31 points in 45 games in the AHL this season, Zadina hasn’t translated to the NHL as seamlessly as he could have. Still, with a full year of development and two training camps under his belt by the time the 2019-20 season starts, I see no reason why Zadina should be playing anywhere outside of the team’s top-six at the start of the season.

It’s not like this team boasts a plethora of players who are necessarily deserving of a top-six spot anyway and Zadina’s upside and skill set mean he has the best chance of succeeding if given the opportunity. If things don’t work after a few weeks, there’s no reason he can’t be lowered in the lineup. To start, though, he has to be given the best opportunity to succeed.

Where should the Detroit Red Wings start Filip Zadina next season? Comment below.