Over the last five years, the Devils have failed to get their lesser-known forwards engaged in the offense. In the beginning of this half-decade stretch, the bottom-six consisted of role and utility players who were not expected to contribute much more than a rare scoring opportunity. Now, even with talented forwards littered throughout the lineup on any given night, the Devils’ offense still fails to produce.

The first and second lines over the years have been successful. Mainstays like Kyle Palmieri and Adam Henrique had career years in 2015-16 and Michael Cammalleri is scoring at a torrid pace when in the lineup. Taylor Hall and Travis Zajac have also shown a great deal of chemistry and P.A. Parenteau contributes to their success as well.

The problem, however, is towards the bottom of the lineup. That problem is surprising this year because of the team’s revamped forwards corps and will likely play a major role in New Jersey’s playoff push.

The Devils have dressed 17 different forwards this season. The top-six has been mostly stagnant: Michael Cammalleri, Taylor Hall, Adam Henrique, Kyle Palmieri, P.A. Parenteau, and Travis Zajac. The bottom-six, however, is more susceptible to change and tends to transform on a weekly basis.

On a typical night, the bottom-six consists of Pavel Zacha, Devante Smith-Pelly, Beau Bennett, Vern Fiddler, Sergey Kalinin, and Nick Lappin. Also appearing in about half the games are Reid Boucher and Jacob Josefson. 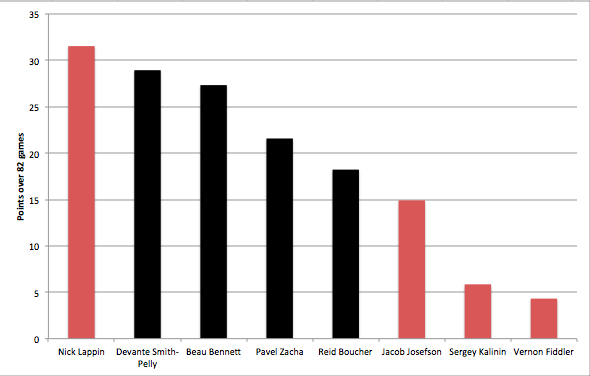 Broken down by line are their extrapolated 82-game projections, with the red bars denoting fourth-line talents and the third line coded in black. It’s reassuring to see players above the 25-point plateau at this point in the season, but the positives die out there.

Reid Boucher, by all indications, is not the same player he appeared to be last season when he scored at a 40-point pace. Much of Smith-Pelly, Zacha, and Bennett’s production came from the second and first lines, not their current stations. Finally, Vern Fiddler and Sergey Kalinin both seem to be harshly regressing.

What it Means for the Top-Six

If this team wants to make it to the playoffs, the bottom-six will need to do more besides scoring the occasional goal. They will need to carry the offense and produce numerous chances each game.

A Conundrum of Sorts

The question at this point should be about how John Hynes can shake up the lineup, because it is clear that this iteration of the bottom-six is not cutting it. However, the threat of waivers may prove to be too much for New Jersey.

The Devils have just four players who are waivers-exempt, and each of them are either playing well (Nick Lappin, Yohann Auvitu, Damon Severson) or would have to return to juniors for the rest of the season (Pavel Zacha). With that said, it is unlikely that Hynes would risk losing one of his talents for the sake of sending a message.

The only resolution, that means, is for Hynes to continue trying to motivate his forwards. Shuffling the lines and rotating players in and out of the lineup will help to find the right combinations, but sadly it seems that talented AHLers like John Quenneville and Joseph Blandisi will be stuck for a while.

If the bottom-six does not step up, the rest of the team will suffer and ultimately any quest for the playoffs will be an uphill battle. Given that Hynes will not have much flexibility to call players up or send them down, it will be up to him to creatively find trios of forwards that are able to perform.