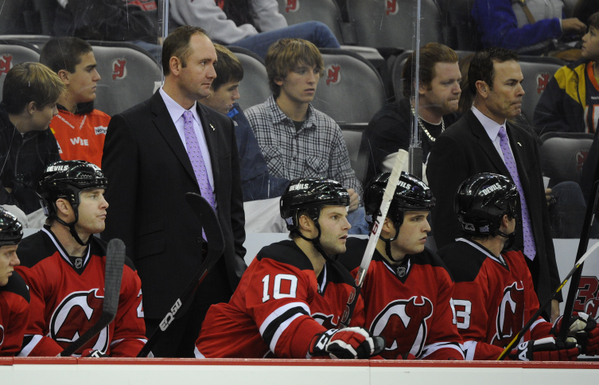 The Jack Adams Award, presented to the NHL coach who is “adjudged to have contributed the most to his team’s success” has been won by a New Jersey Devils head coach only once. In 1993-94, after guiding the Devils to the Eastern Conference Finals, Jacques Lemaire received the honor. In doing so, Lemaire edged out several other strong candidates, including Mike Keenan, who coached the Rangers to their first Stanley Cup Championship in 54 years that spring.

This season, there is no shortage of names that deserve consideration. There are the ‘usual suspects’: the Pittsburgh Penguins’ Dan Bylsma, the Boston Bruins’ Claude Julien, and the Rangers’ John Tortorella have each won the award before and have their current teams playing at an elite level.  Other mentions include Detroit’s Mike Babcock, Ottawa’s Paul MacLean, Florida’s Kevin Dineen, and the Blues’ Ken Hitchcock, who took over a struggling team just 13 games into this season and currently has them in the fourth position in the powerful Western Conference.

No discussion regarding the Jack Adams would be complete, however, without also mentioning New Jersey’s Pete DeBoer. The head coach took over a Devils team last summer that had missed the playoffs for the first time in more than a decade. Entering his first season in Newark, there were questions about who would be named team captain, whether star winger Zach Parise would return to form after a devastating knee injury, and whether the signing of sniper Ilya Kovalchuk to a $100 million deal was a mistake. And that was just during the offseason.

All DeBoer has done since October is win, while managing the team with a calming, professional demeanor that has brought stability to the Devils bench.

“All the guys want to play for Pete,” Parise said. “The mode and atmosphere around the locker room is great. He has done an awesome job.”

It’s not just the professional atmosphere that makes DeBoer a success, though. The skill he’s shown with juggling a Devils roster that has been peppered with injuries to key players has been masterful, as the team seems to not miss a beat when players like Adam Larsson and Travis Zajac miss significant time. He’s also been praised by veteran Martin Brodeur for his handling of ice time, a sensitive issue.

“He understands the ups and downs of a season and is good about taking care of guys by giving them days off,” said the goaltender, who will be 40 years old in May.

General Manager Lou Lamoriello, architect of the Devils three Stanley Cup Championships, passed on hiring several other candidates last summer,  including the aforementioned Ken Hitchcock, for the lower profile DeBoer. Lamoriello received some criticism for the decision to hire DeBoer last summer, but claimed that it’s all gone according to plan.

“This is certainly what we had hoped for,” Lamoriello said. “I felt extremely comfortable with the conversations Pete and I had prior to hiring him. We felt Pete was the right person and he has done an excellent job.”

The fact that DeBoer has the Devils on a meteoric rise to the top of the Eastern Conference, in which they currently have the second best point total, is testament to his skill as a leader and coach. Expect his name to be mentioned in the Adams Award discussions throughout the Spring.