We have finally reached the homestretch, where only 12 games remain for the New Jersey Devils.  A dozen contests staring them down and a trade deadline looming.  The team is still clinging to seventh place in the Eastern Conference and goaltender Martin Brodeur is back in the fold but the team has two directions it needs to navigate.  Those avenues involve either adding a proven sniper or doubling down by clamping down on defence.

Over their last 12 tilts, the Devils are 4-4-4 (12 points).  Overall New Jersey is 15-12-9 (39 points).  Plus the Devils are 10-6-2 at home and 5-6-7 on the road.  In their next 12 games, the Devils face nine teams presently in playoff position and the other three have all beaten New Jersey this season.  So it is going to be a grind to the end and the season finale at the New York Rangers could be for the eighth and final playoff spot, if you’re assuming the New York Islanders continue to tear it up and soar into seventh.

Conversely on defence, the Devils penalty kill is 22nd, at 79.8%.  Although the club does rank atop the NHL in netting short handed goals, tallying nine on the campaign.

Continuing to pace the Devils on offense is Patrik Elias.  Elias has garnered a team leading 30 points on the campaign.  David Clarkson still leads the squad with 12 goals and 134 shots.  Also cracking double digits in goals are Adam Henrique and Ilya Kovalchuk, each notching ten apiece.

Some of the more unsung heroes, who continue to pick up the slack to churn out scoring opportunities are Andrei Loktionov, Steve Bernier and Ryan Carter.

What is surprisingly deceptive about the Devils, which has gone overlooked with the injury to Brodeur and the dearth of scoring, is the defence.  Yes there is a lot of depth there in numbers and yes as many have postulated going back to August, they need to flip one or two for a forward or maybe even another clamp down defenceman.

Right now the Devils have three defencemen (Marek Zidlicky, Bryce Salvador and Peter Harrold) who have posted a plus/minus rating of -8.  Don’t get me wrong, they do play well as a unit but it wouldn’t stun me to see the Devils shake it up on the blue line.  They could always call up a guy like Alexander Urbom, who had made significant strides with AHL Albany this season and is more than deserving of a spot. 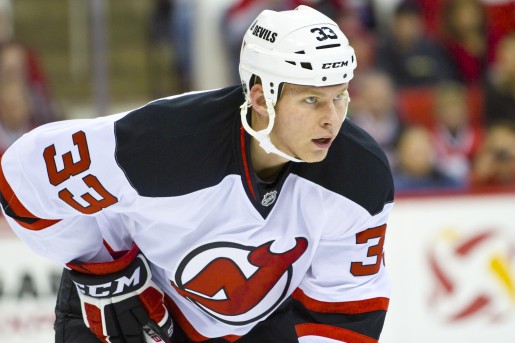 In net the team has stabilized with Brodeur back but one small tweak and it could be curtains on the season, especially with Kovalchuk out.

If the Devils had won even half of their shootouts, they’d be in a much more enviable position right now.  Yet they are still in a playoff spot, still with their destiny in their own hands, still with Lou Lamoriello at the helm come trade deadline.  They’ve been here before and one would have to be a fool to bet against them.