It is getting on late summer and my inner Hunter S. won’t leave me alone.  Like singers who have “classical” and “pop” voices, I have a mannered writer’s voice who can put it all in order as it should be and then there is the writer who wants to pith the spinal fluid out of the subject, spill it on the bare ground, and read the signs the Hockey Gods want to reveal in the silt-edged, clotted dregs of that grim libation tribute.

Welcome to the off-season, at least what’s left of it.

Let’s face it, this was not  the off-season that made the NHL its bitch.  That would be last summer.  Remember last off-season?  I do.  Last Summer broke our hearts.  It was four bitter months that had a body count.  Every loss, every word of equivocation from the talking heads who had a professional or financial stake in the status quo felt like a huge shove backwards.  As many of us in the hockey press community watched in horror, an online hockey pundit trailed by a hand full of wannabes circled the vacated body of the last man off the ice like vultures.   So much for the idea that there’s no crying in hockey.  We should all hope that summer was a one-off.

As the preseason (hopefully) approaches,  fans of the NHL  need some t-shirt wisdom to chant to ourselves as the NHL and the NHLPA crack the seal on the revelations by the saints of the legal ether.   I was thinking of something along the lines of  a crest with a Sedin Twin on either side and Te Nobis Pecuniam!* written on a scroll draped across fields of ice blue, silver, and gold.

Trite?  Yep.  But this is not an unreasonable demand from the Seventh Man, either.   The Seventh Man has been showing the NHL the money for quite some time and did so in a big way this year.  Subjects of the Los Angeles Kings snapped up all but a little less than two hundred premium season ticket packages on their July 30th Select-A-Seat event.   On August ninth, the Sabres Organisation announced that their renewal rate for season tickets was at 99%. 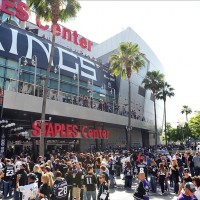 Clubs continue to sell the fans on the premise that it is up to them to keep the game alive.  Especially during the lean years, when the marquee names have departed for other teams and the corporate sponsors start to act like bad boyfriends, it is the season ticket holders who help professional sports to thrive, not just in the bigs like the NHL, but at all levels.  The drama may be at the bargaining table between the GMs and the newly and not so fresh  out of the bubble wrap stars.  The sturm and dang of arbitration and this year’s collective bargaining agreement refit might make the headlines.  The heart of your story is that one variable that is mentioned as a number, a market share,instead of the large, often contentious extended family that teams enjoy a relationship with year after year:  the season ticket holders.

Ladies and Gentlemen of the Collective Bargaining Committees of the NHL and NHLPA, in Buffalo and Los Angeles and across North America, the Seventh Man is speaking out and they are making sure their message is crystal clear.  They want hockey. They want the season to start on time and they want to see rosters populated by men who are prepared to be heroes on the ice.  They will accept nothing less.

It’s time to show them the money where they should be seeing it, on the ice.