What do Cory Conacher, Tyler Kennedy and Mikhail Grabovski all have in common? They, along with six others (Kyle Okposo, Josh Bailey, Nikolay Kulemin, Brock Nelson, Ryan Strome and Anders Lee), played alongside captain John Tavares on the Islanders first line last season.

The Isles only set line heading into training camp this season was what Don Cherry called “the best fourth line in hockey ever” of Matt Martin, Casey Cizikas and Cal Clutterbuck. However, it looks like the first line has finally taken shape.

The 2009 6th-round pick started last season with the AHL’s Bridgeport Sound Tigers. Lee was called up in late October and never looked back. The 25-year-old played 21 games on the first line last season. He is a bigger and stronger version (6’3″ 228 lbs) of Matt Moulson (6’0″ 200 lbs), who played alongside Tavares for 4 plus seasons. The chemistry Tavares had with Moulson was one of the few bright in those 4 plus seasons. You can already see a chemistry building between Lee and Tavares. Lee is not afraid to get right in front of the crease and get the “dirty goal”. He big on deflections as well. Lee has been on the top line with Tavares for a week’s worth of preseason games. Pencil in at least 30 goals with Lee on Tavares’ wing. 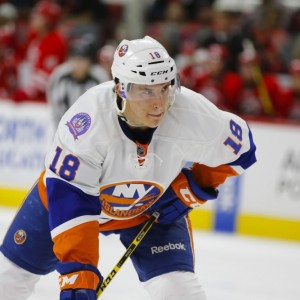 The 2011 1st-round pick began the 2014-15 season on a line with Mikhail Grabovski and Brock Nelson. Then formed “the kid line” with Lee and Nelson.  The 22-year-old played the final 5 regular season games and the series vs the Washington Capitals on the first line. Strome had a strong sophomore season scoring 17 goals, 50 points and a team-high plus-23.  Strome’s natural position is center but trained this offseason to play on the wing. Scoring-first attitude will be an adjustment for Strome as he told Corey Wright of Islanders.com:

I’ve been working on my shot and I want to score more goals this year. We have some great play-making centermen and if I’m going to be playing on the wing, I have to be ready to shoot that puck. And if I am playing on the [power play], I want my shot to be at the point where I am confident I can beat goalies.

Besides the captain, Strome has the most talent on the team. If Strome’s main focus this season is scoring goals, expect a nice increase from his 17 of a year ago.

27-91-18 could really be fun to watch if that's the route Capuano decides to go. @strome18 could have a really big year. #Isles

Josh Bailey played more than half of last season on the top line with Tavares. The 2008 1st-round pick set career highs in points (41), ice time (16:47) and shots (140). He is a very good defensive player and plays well without the puck. His play helped Tavares’ game defensively. Besides getting married this offseason, Bailey put on some muscle.

Looks like Josh Bailey put on some muscle. Weighed in at 194 last year, up to 210 this year. Could make a huge difference in his game #Isles

I know Bailey is a polarizing figure to Islander fans. We have to take him for what he is, a 40-50 point solid foward. I know he is not the sexy pick to be on the top line but head coach Jack Capuano has to consider him a candidate.  However when the regular season opens up October 9th vs the Stanley Cup Champions Chicago Blackhawks in the very first regular season game at the Barclays Center the New York Islanders top line would consist of John Tavares centering Ryan Strome and Anders Lee.