In the eyes of many a hockey observer, Edmonton Oilers centre Ryan Nugent-Hopkins seemed poised for a bounce back season in 2016-17. After a rather disappointing campaign in 2015-16, it seemed almost like a foregone conclusion that the former first overall selection would put together a solid season playing second fiddle to Connor McDavid. While there is still plenty of hockey to be played, the opening two months of the season have not been kind to the Burnaby native.

Despite playing arguably the worst game of his career during Thursday night’s 6-5 loss to the red-hot Philadelphia Flyers, Nugent-Hopkins has started to find his way onto the scoresheet of late. Considering he picked up a grand total of nine points through Edmonton’s first 20 games, the fact he has collected six in the club’s past ten games is definitely a step in the right direction. To his credit, after delivering a performance he would love to forget in the City of Brotherly Love, the kid went out and scored the equalizer late in the third period the very next night in helping the Oilers get to overtime, before falling in a shootout to the Minnesota Wild.

RNH Starting to Light the Lamp

On the surface that may not seem like much but five of those points have come in his last six games and remember…we are talking about a player who did not score at even strength until Game 21. So the question has to be asked, what gives? Well, it appears to be a combination of a few things. There is no question Nugent-Hopkins hasn’t produced anywhere near the level expected but a focus on becoming a better “200-foot” player and some bad luck have also played a big role in his lack of “numbers”. While that may sound like an excuse to some, that is just not the case.

It’s no secret Todd McLellan has wanted the 23-year old to work on becoming a better “all-around” player and has made a point of giving him tougher matchups since taking over behind the bench. Not surprisingly, he handed Nugent-Hopkins a similar responsibility with Team North America during the 2016 World Cup and continued down that same path with the Oilers to the start 2016-17 season. After all, freeing up No. 97 as much as humanly possible was always going to be priority one…and rightfully so.

Unfortunately, while McDavid has been collecting points at an absurd rate, Nugent-Hopkins has had a tough time adjusting to his new lot in life and doing so without the help of Taylor Hall, Leon Draisaitl or Jordan Eberle. With the former now in New Jersey doing his thing with the Devils and the other two on different lines in hopes of giving McLellan better depth up front, his struggles should not have come as a complete surprise. Edmonton’s lack of quality wingers was always going to be an issue for this team and early returns have proven that to be true. 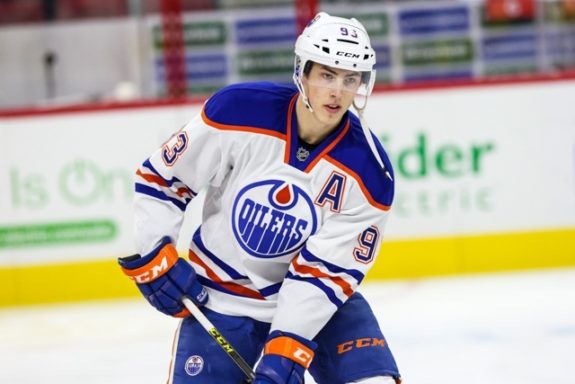 Playing with Eberle Should Help

However, the extent to which Nugent-Hopkins has laboured is disconcerting. Instead of looking like the offensive force who starred for the Red Deer Rebels in the WHL, we are suddenly watching a kid who is so concerned with his own half of the rink that his creativity at the other end is essentially non-existent. Add to that a shooting percentage that just recently climbed to 6.2% and you suddenly have a perfect scenario for an ugly start to a season and a player losing his confidence.

On a positive note, other than his forgettable performance against the Flyers, Nugent-Hopkins has actually taken huge steps forward in his overall game over the past season and a half. In fact, outside of his continued struggles in the face-off dot (43.4%), his coverage in the defensive zone is light years from where it once was. While we are not talking about the second coming of Patrice Bergeron, the three-time 50-point man has developed to the point where he can more than hold his own in the defensive zone against the better lines in the league. The problem with that, the other end of the rink has now become a challenge.

RNH was sniping last night. 🎯 Can he strike again?! pic.twitter.com/B6hvCgHC7r

It may not have looked like it at first but the recent decision to shift Eberle back to Nugent-Hopkins line has actually led to us seeing flashes of “the old” RNH and No. 14 finding his way onto the box score as a contributor with far greater frequency. Prior to the shift, one could easily make the argument Nugent-Hopkins hadn’t exactly been given the necessary linemates to help him along…especially with Benoit Pouliot being as ineffective as he has been for much of the season.

Kopitar 2 goals.Toews 4 goals. Bergeron 4 goals. 21 games.
Those type centers are struggling and we should be patient with ours. RNH.

While they can’t go back and change what has already occurred, the Edmonton Oilers would love nothing more than to have this recent stretch be the spark that kickstarts and ultimately save Ryan Nugent-Hopkins’ season. In order for this team to have any shot of making the playoffs, they are going to need No. 93 to do his part but he is going to need some help. Hopefully, this coaching staff can find a way to lighten the burden they have asked him to carry and at the same time, loosen the reins just enough to allow the player we all know is there to come out and make more than a cameo appearance.