This article has been promoted from our Press Box section. Our Press Box is open to up and coming writers. More detail can be found here.

After the Toronto Maple leafs failed to qualify for the playoffs last season general manager Brian Burke declared the team would address the need for a number one center and the desire to add a “super star player” over the off season.

The off season has come and gone and Burke missed out on the biggest players available at the center position in Brad Richards, Mike Richards and Jeff Carter. The best player Burke was able to acquire to center the Leafs top line was Tim Connolly. Connolly has a significant history of injuries and has not played a regular season game with the Leafs yet. Connolly has missed all of the Leafs games with an “upper body” injury and has gone from day to day to week to week. It is beginning to appear that he may be suffering from another concussion. Burkes decision to gamble on Connolly may be as complete failure as his ability to acquire a super star. So does Burke go fishing in the trade market to acquire a top center or a super star? If so what are his best players to target?

Zach Parise of the New Jersey Devils was awarded a one year contract via arbitration this summer. Next season at the conclusion of that contract he will become a UFA. If Devils GM Lou Lamoriello does not think he can resign Parise prior to July first he may be willing to trade the super star rather than loose the asset for nothing.  Burke could possibly offer a young goalie either Gustavsson or Scrivens along with some promising talent such as Cody Franson, Nazem Kadri, Keith Aulie, Carl Gunnarsson and a top six forward like Mikhail Grabovski or Joffrey Lupul. So a potential deal may look like something along these lines Gustavsson, Gunnarsson and Grabovski for Parise.  Parise has recently been named team captain however suggesting the Devils have no intention of moving him. I believe they have quietly negotiated a long term extension that will likely be announced early in the New Year. 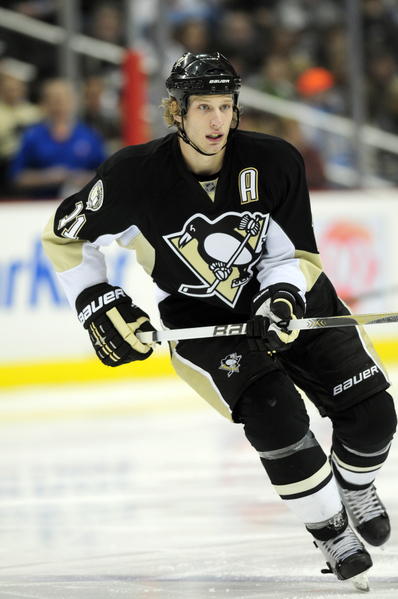 Jordan Staal in Pittsburgh is a potential number one center that is buried behind Sidney Crosby and Evgeni Malkin. There has been rumor the Pens may play Staal and Malkin together moving one to the wing. All three players missed significant time due to injury last season however and were only all healthy for two games the entire season. Currently Crosby is still recovering from his concussion and Malkin is day to day with his knee injury again. If they can all regain health Pittsburgh may look at moving Staal to improve the wing. Malkin and Leafs winger Nikolai Kulemin played together in Russia and are close friends. If reunited in the NHL they may form a formidable duo who can compliment Crosby and Neal on the other top line. Along with Kulemin Burke could also include a good young defenseman such as Aulie or Gunnarsson.

It is my guess that either Stall or Malkin play wing on and Pittsburgh holds onto Staal.

Jason Spezza of the Ottawa Senators was recently the subject of trade rumors after Dave Hodge mentioned that members of Spezza’s family believe he would soon be a member of the Toronto Maple Leafs.  Given Spezza is a Toronto native it is safe to assume he would wave his no trade clause. Ottawa is in the middle of a rebuild right now so it is possible they would consider moving Spezza for several young players. By the time the trade deadline approaches if the Sens are not satisfied with their young players such as Eric Condra, Bobby Butler, Colin Greening, Stephan DaCosta, Brian lee and Peter Regin they may be willing to move Spezza. Toronto could offer an attractive package of players with options such as Tyler Bozak, Joe Colborne, Jake Gardiner, Matt Frattin and Kadri. It is well known the Senators wanted to draft Kadri in the ’09 draft with the eighth pick but Toronto selected him with their seventh. Imagine how trading Spezza to Toronto would rekindle what was once a hot rivalry between Ottawa and Toronto. History dictates that star players are not traded to division rivals so this scenario is unlikely.

Kyle Turris of the Phoenix Coyotes is currently without a contract and the center of much internet speculation. In a conversation with CBC’s Elliot Friedman Turris admitted his willingness to sign a contract for a more reasonable salary with another team confirming his desire to be traded. Damien Cox recently suggested a Turris for Bozak trade as a possibility. If Phoenix GM Don Maloney feels moving Turris is his best option he may well be a Leaf before too long.

Paul Stastny of the Colorado Avalanche was rumored to be on the trade market this past summer but is still a member of the Avalanche. With the emergence of Matt Duchene as the team’s number one center Stastny as the second line center with a $6.6 million cap hit does not fit into the Av’s tight budget very well. With the leafs close to the cap already they would need to send significant cap back in return but could do so in several players. A package of players such as Connolly or Lombardi along with a depth player such as Armstrong or Bozak and a top prospect such as Gardiner or Colborne may be enough to pull Stastny into a Leaf jersey.

1 thought on “Five Potential Trades for the Toronto Maple Leafs”