It seems as if every year around this time, the Calgary Flames emerge from an abysmal fall/winter and suddenly become energetic, renewed and full of life. You can call it a spring awakening if you’d like, but some see it as a self-destructing act for a team who’s best interest is to head south of the standings rather than north, as the post-season approaches.To be fair, it’s hard not to pick up two points here and there when you are facing some of the league’s worst teams without purposely playing terribly.
The Flames faced this dilemma when they began last week hosting the Buffalo Sabres and ended with a trip to Edmonton to see the rival Oilers.

Sitting dead-last in the standings and now without Ryan Miller in net, the Buffalo Sabres were mathematically the first team to be eliminated from the playoff race. Like the Flames, the Sabres have entered rebuild mode, and with a 22-year old rookie goalie of their own to battle Calgary’s Joni Ortio, Tuesday night’s game was a showcase for two teams struggling to start anew.
It took a full 13 minutes for the goal lamp to get lit up, and it was Buffalo’s Drew Stafford who got the job done. Of the mere six shots on net Nathan Lieuwen faced in the first, none managed to get through.
And it almost looked as if Lieuwen would make it through the entire second period without letting the Flames get on the board, if not for a game-tying wrister by Joe Colborne with only two minutes left in the frame. With his eighth of the season as a Flame, Colborne has now reached the halfway mark of all the goals he scored in two seasons with the Toronto Maple Leafs. Needless to say, the 24-year old center seems to be adjusting well to life out west.
The majority of the game was dominated by the home team, and the third period saw goals from both Mike Cammalleri and Paul Byron, bringing the final score to 3-1, Calgary.

Flames fans were treated to a busy night of offense the following Friday as the Nashville Predators visited the ‘Dome.
The Preds jump-started the explosion of goals early in the first period, with Victor Bartley and Shea Weber quickly putting their team up 2-0, with goals coming within seconds of each other. Right from the get-go, the Predators seemed hungry for a win, and rightfully so. A playoff spot may still be in sight for Mike Fisher and company, who are now just seven points out of the coveted eighth place in the Western Conference.
But the Preds’ lead was cut in half just as the first period was about to end, thanks to a powerplay goal by Kris Russell.
A back-and-forth exchange of goals in the second had the entire arena roaring, and thanks to Mike Cammalleri, Jiri Hudler and Mikael Backlund, the Flames made it to the third period at a 4-4 tie.
Unfortunately, the final frame saw two unanswered goals from Shea Weber and Matt Cullen, and while Cammalleri came oh-so-close to sending the game into overtime with his 22nd of the season, Calgary failed to score once more, and they fell to the Predators 6-5.

In their fifth and final meeting, the Flames looked to come out of an even-win stalemate with a victory over the Edmonton Oilers.
And not only did they succeed but they sent a very clear message to their struggling division rivals: We’ve fully embraced a rebuild, and we will deploy it better than you. Although the Oilers got on the board first, Edmonton’s one and only tally was quickly forgotten following another scrap between Kevin Westgarth and Luke Gazdic. Thankfully after this bout, neither player had to leave the game from injury.
The fight put some energy into the Flames, but it was a penalty shot awarded to Matt Stajan which he easily put past goalie Ben Scrivens that really awakened the team. After scoring the goal, Stajan pointed to the sky, dedicating it to his recently-passed newborn son, who was only a week old.
The emotional display sparked the visiting team, and all of a sudden it was goal after goal after goal in favour of Calgary.
Mike Cammalleri, Paul Byron and Kevin Westgarth contributed one each, and Curtis Glencross nabbed his third career hat trick, as the Flames routed the Oilers 8-1. 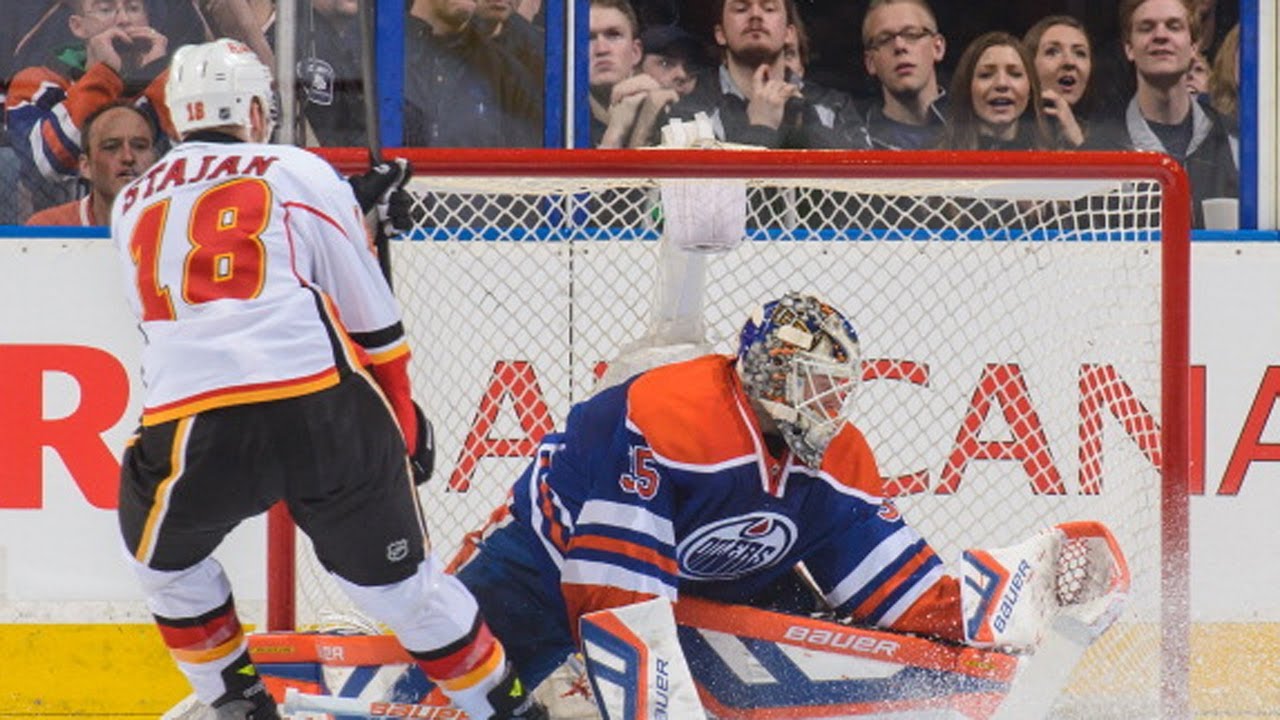 A three-game home stand will see the Flames host the San Jose Sharks, Anaheim Ducks and New York Rangers before they head to Ottawa to battle the Senators to end the month of March.

Stay tuned for Week 23 of The Flames Files and follow the Calgary Flames’ progress in the 2013-2014 season.