There are always those fans who take hockey way too seriously. Chill out, guys. [The Leafs Nation]

What has happened to the seemingly playoff-bound Maple Leafs? [Toronto Star]

James Neal is a just a dirty hockey player. [HockeyBuzz] 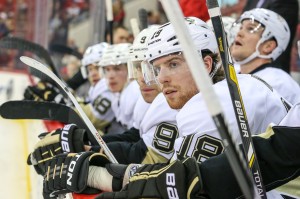 Cam Ward has had a tough season, but this save should be a highlight. [Fan Sided]

The Boston Bruins are on quite a hot streak. [CBC]

The Flyers have been looking mighty dangerous lately. [CBS Sports]

Ottawa recalled Mark Stone because Bobby Ryan might be hurt. For their sake hopefully he isn’t. [Sen Shot]

The Canucks got Daniel Sedin back. [The Province]

Martin St. Louis hasn’t been the same player for the Rangers. [XN Sports]

Seth Jones may or may not have a concussion. [Pro Hockey Talk]

It just keeps getting worse for the Oilers. [National Post]

And in case you missed, Matt Stajan paid tribute to his late son after a nifty penalty shot goal. [Yahoo Sports]