A grueling set of matchups faced the Calgary Flames in Week 9 of the NHL season: the two most recent Stanley Cup winning teams, and a California team whose arena seems to have a cursed effect on the Flames. After picking up points in three straight games, the team aimed to keep the ball rolling and move up in the standings.
Unfortunately, they were not successful and more importantly, the injuries that ensued in the past week are now threatening to keep the Flames in the league’s bottom five.

With the Blackhawks in Stampede City, the Flames started the game off in a familiar fashion: strong and spirited. But a recurring theme for the Flames throughout the season reared its ugly head late in the game and after a series of sloppy 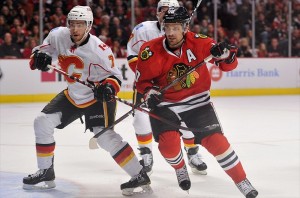 plays and small mistakes, it was Chicago who came out on top.
Shots in the first period were even, and both rookie goaltenders stopped all 10 attempts at opening the scoring. Midway through the second, Matt Stajan let rip a slapshot that beat 24-year old Antti Raanta and gave the Flames the lead.
Under three minutes into the third, the Flames doubled the lead thanks to Sean Monahan’s wrister, assisted by Jiri Hudler (Hudler’s second helper of the night). Monahan and Hudler are shaping up to be a dynamic duo, and lead the team in points thus far.
But leave it to Patrick Kane to capitalize on a few unfortunate errors on the Flames’ part, and get the Blackhawks back in the game. Kane scored twice, sandwiching a goal by Patrick Sharp, to knot up the scoreboard and draw the win in under 10 minutes.
The Blackhawks’ victory gave Raanta his very first NHL win, mirroring Reto Berra’s first career win against Chicago on November 3rd.
The more significant outcomes of the game were the losses of Sean Monahan and Dennis Wideman due to injury. After taking a shot to the foot in a practice several days before, Monahan was examined post-Blackhawks game. A scan determined that the rookie had suffered a hairline fracture and was deemed week-to-week.
Wideman’s injury came in the third period of the game, and the broken bone in his left hand will have him out for at least two months. With Mark Giordano already out, Wideman’s injury leaves the Flames’ blue line in a dire situation. 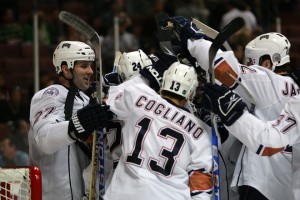 No trip to Anaheim has ever been a good one for the Flames. Well, at least not since January 19th, 2004.
The Anaheim Ducks’ top line exploded onto the ice with prolific scoring to once again deny the Flames a win in the Honda Center.
David Jones scored two goals in the second period, but it was not enough to counter the likes of Corey Perry and Dustin Penner, who along with Andrew Cogliano and Sami Vatanen, elevated the Ducks to a 5-2 win at home.
The Ducks scored three unanswered goals before Jones managed to deflect Ladislav Smid’s shot into the net. After Cogliano’s backhander put brought the Ducks’ lead back up to 3, Jones again found the back of the net, this time unassisted.
Dustin Penner’s second goal of the night safely sealed the victory for Anaheim, halfway through the third.
The presence of Monahan and Wideman on the ice was clearly missed, as the Ducks outshot the Flames 42-21.
With a 5-2 loss, the Flames departed Anaheim with their 19th loss to the Ducks on the road.

Their dads in tow for the tail end of a two-game road stand, former King Mike Cammalleri and the rest of the Calgary Flames sought to give the team’s father’s trip a happy ending in Los Angeles. And it was Cammalleri who did just that with only half a minute left to play in the game.
A fairly evenly-matched first two periods produced only two goals, one short-handed goal from Blair Jones in the second, and one from Justin Williams in the third. And just when it looked like the game was headed into overtime, Cammalleri whipped a little backhander past Ben Scrivens at 19:37, to give the Flames a much-needed two points. The goal was assisted by Mikael Backlund, who has been awarded more ice time due to Sean Monahan’s absence. Backlund’s helper was only his third point in the last ten games.
Karri Ramo played his 10th game of the season and earned his third win, relieving Reto Berra of his goaltending duties for the night after being pulled in the Anaheim game.

The 2-1 win over the Kings wrapped up the Flames’ mini road stretch, and the team will get three days to rest and build off the victory before facing the Phoenix Coyotes at home on Wednesday, December 4th.

Stay tuned for Week Ten of The Flames Files and follow the Calgary Flames’ progress in the 2013-2014 season.
Check out our partners at TiqIQ for the best deals on Calgary Flames tickets for all 2013-14 games.