Nothing pumps up a team more than an outstanding debut performance by a rookie goaltender and a win over the defending Stanley Cup champs. The Calgary Flames were riding this euphoric wave on November 5th as they touched down in Minnesota to face Zach Parise and company. The Wild themselves were coming off of back-to-back wins at home and were hoping to extend the streak to three.
With Reto Berra in net once again, the Flames aimed to deny them the satisfaction. His second NHL game as a starter didn’t quite play out like the fairy-tale that was the previous game, with Berra only making 19 saves to the Wild’s 24 shots.
However, despite letting in 5 goals, the blame was not all put on Berra. The Wild were on a mission, and Calgary’s defense simply wasn’t there.
Jiri Hudler (who leads the team in points) got things started just over five minutes into the game, shooting the puck past Minnesota’s netminder Josh Harding. But Mikko Koivu answered back not long after to tie the game at one by the end of the first.
Unfortunately, the rest of the game just got a little bit…Wild. Koivu added another point to his scoresheet, assisting Zach Parise’s powerplay goal, the only tally in the second. And in the third, Justin Fontaine, Zenon Konopka and Zach Parise contributed a wrist shot each to run up the lead on the hapless Flames. Parise and Koivu earned the first two stars, with three points apiece to end the game.
In the battle of the goalies on each end of the ice, Harding had the better night, to say the least, stopping 24 of 25 shots on net.
Several turnovers, and simply being outplayed mentally and physically, were the undoing of the Flames, who fell 5-1 on the second game of a five-game road trip. 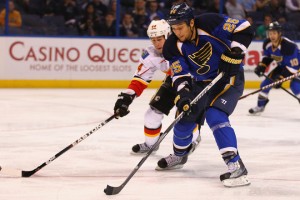 Still with plenty of confidence in his Swiss goaltender, Bob Hartley chose to start Berra in net against the St. Louis Blues two days later. The matchup was set to be a tough one, with the Blues roster boasting a red-hot rookie who made a name for himself last season, and one of the league’s goal-scoring leaders, on their roster.
Vladimir Tarasenko put the Blues on the scoreboard first minutes into the first, assisted by former long-time Flame Jay Bouwmeester. Maxim Lapierre added another halfway through the opening frame, and early in the second, Alexander Steen tripled the lead. The two unanswered goals were assisted by another former Flame, Jordan Leopold.
Although a 3-0 lead seemed pretty dismal for the visiting team, the boys in red mustered up enough energy to try and stage a third period comeback. The push started with a backhander from Tim Jackman that found its way past Brian Elliot, and Mike Cammalleri’s wrist shot brought the Flames to within one with five minutes to go in the final period. But a tying goal could not be produced and Calgary was handed their second straight loss.

The following night, it was a showdown between the league’s two most talked-about draftees, as Sean Monahan faced the number one overall pick Nathan Mackinnon.
The most impressive in the season so far, the Colorado Avalanche had won 8 out of their last 10 games, and were on the hunt to improve their record.
J.S. Giguerre was starting in net in place of the Avs’ troubled Seymon Varlamov, and this time it was Karri Ramo who stood on the opposite end of the ice.
Only one goal was scored in the first period, courtesy of Ryan O’Reilly. But on a tripping penalty to the Flames’ Mikael Backlund, Paul Stastny quickly capitalized on the man advantage and doubled Colorado’s lead.
And although allowing two unanswered goals could be expected of a team who had just come off back-to-back losses, one being just the night before, the Flames played with unanticipated vitality, and put up a good fight against one of the highest-ranked teams in the league thus far. Mike Cammalleri potted two goals to counter John Mitchell’s in the second, and by the end of the period the Flames only trailed by one.
Both Ramo and Giguerre spent the final 20 minutes shutting out each other’s teammates, and with seconds to go and Ramo pulled for the extra man, Matt Duchene’s empty netter sealed the Flames’ fate with a 4-2 final score.

The Flames end a rather disheartening road trip with only one win under their belts, but look forward to picking up some much-needed points in the Saddledome, as the start a three-game home stand on Tuesday, November 12th.

Stay tuned for Week Seven of The Flames Files and follow the Calgary Flames’ progress in the 2013-2014 season.