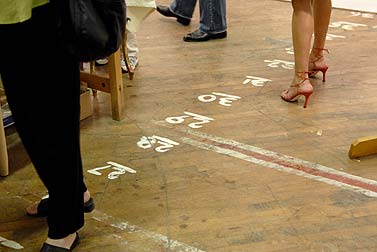 While the protagonists in the CBA docu-drama have taken an extended sabbatical from direct confrontation, their understudies — Steve Fehr and Bill Daly — have been holding back-channel discussions that led to yesterday’s reported session that lasted until the wee hours of the morning.  While there are certainly numerous fronts of disagreement, the largest bone caught in the collective throats of the NHL and NHLPA of late has been the treatment of existing contracts.  Not unreasonably, the players believe that existing contracts —  offered by the owners, signed by the players and approved by the NHL — should be honored in full, with the now-infamous 50/50 split being phased in.  The owners take a different view, asserting the economic need to move to 50/50 immediately, and offer a rather convoluted “robbing Peter to pay Paul” way of providing the appearance  of honoring the deals.  Such is the stuff of which stalemates are made.

All of this has been wrapped in some rather unseemly hyperbole  — on both sides.   Donald Fehr has ingenuously tossed around extremely large numbers, characterizing such as “concessions” or ” give backs” by the players.  Inherent in this approach is a misplaced sense of entitlement to the “57% solution”, and a professed sense of moral outrage at the owner’s attempt to abridge existing contracts.  For their part, the owners have made an art form of draconian proposals and apparently see no logical inconsistency in beating each other with economic clubs for the privilege of bestowing huge contracts on players — then turning those same clubs on the players — as if these agreements were somehow imposed upon the owners by unseen forces.  The truth, of course, lies in that vast gray ocean of ambiguity that lies between these extreme shores.  The CBA process creates few “entitlements”, and to view changes from one contract to another as “concessions” is not truly an appropriate use of the phrase.  Few observers ever believed that the 57% number was a viable long-term proposition, rather than a short-term appeasement to the NHLPA for the inconvenience of a salary cap.  The players tacitly acknowledged that fact in moving toward a 50/50 solution relatively quickly.  The owners took more of a “slash & burn” approach, making a facially incredible offer to start the proceedings, then ultimately moving to a version of 50/50, and characterizing that as a concession.  More problematic for the owners, however, was the public perception of their refusal to honor existing contracts in full.   Unlike other provisions of the CBA, contracts have independent legal significance, and while they are “subject” to the CBA, all of the existing contracts are valid under the former CBA, and while owners can ask for changes to existing contracts, there is no entitlement to that result.   Hence, the impasse.

An examination of the numbers suggests that neither side has been entirely candid with where things stand in terms of the key benchmarks.  The players want to simultaneously preserve existing contracts, while leaving as much salary room for players as possible.  The owners?  They want to reduce salaries in absolute dollar terms, as quickly as possible.  With those directly competing goals, a little exaggeration and verbal misdirection is to be expected.  So, let’s see what the numbers show — in real terms.  The following chart examines the next three years, showing salary and bonus expense for all teams combined, the percentage of revenue allocated to salaries and bonuses, the number of contracts in force, the number of player slots unaccounted for by existing contracts, and the gap between those commitments and the ubiquitous 50% .  For revenue numbers, the well-publicized $3.3 million number for last year is used as a starting point,  and projecting growth at a conservative 4%.  Salary, bonus and contract information is from Cap Geek  , and all numbers are in millions.

In order to make some sense of this, remember that there are 23 NHL roster spots per club, making a total of 690 NHL contracts at a given time.  For the 2012-13 season, virtually all of these slots (686) are accounted for by existing contracts.   When you total salary and bonus expenditures, it amounts to just over 55% of revenue (53.4% without bonuses).  That comes out to just over $2.6 million for each of those player slots — and that is the number that Gary Bettman has targeted.   In the owners’  ideal world (at least prior to the current discussions), the owners want this to drop to the 50% level immediately  — obviously disrupting existing contracts , and triggering the entire “make whole” controversy.   While that position has softened, the apparent change of heart only comes after the refusal to honor existing deals as written triggered the entrenchment of positions and the refusal to talk.  From the players’ point of view, the shuffling of money from the present time, when it was owed, to the future, merely served to have future players fund current players’ contracts, rather than the owners.

What the numbers show is that the transition to a 50/50 world — at least at the league level — need not be the horrendously complicated or tortuous process that the players warn of, nor is it a simple as the owners’ “so let it be done approach.”   Obviously, when you talk about existing contracts, the largest burden falls in the first year, with smaller numbers of deals coming in subsequent years, and that is precisely what the chart demonstrates.  Further, note that the average value of existing contracts goes up sharply in the second and third years — to something over $4.3 million, reflective of the fact that longer term deals tend to be for higher value players.  One fact, ignored by the players, is that no matter when you make a transition from a 57% world to a 50% scheme, there is a class of player is going to be harmed.  If you reduce the pool from 57% to 50%, there is less of a gap between existing commitments and the upper limit.   That is unavoidable.  You mitigate that effect by dragging out the transition to a 50/50 universe over several years, effectively paying for the transition with growth.  (Of course, Don Fehr would also point out that the players are being deprived of the benefit of league growth, making his dollar figure of “concessions” ever larger.  However, if you look at the average salary, it dips in Year 2, then bounces back in Year 3, so the loss in real dollars is not as dire as the NHLPA might have us believe.  The biggest “victims” are the 272 players who do not have deals for Year 2, and the available pool makes the average just over $1 million.  However, with most of the high value deals already on the books, the net impact is likely not as severe as it might appear.

From the NHL perspective, while the details of the “new” make-whole offer are fuzzy at this point, the league would best be served by biting the bullet, honoring the contracts as they are in Year 1, and going to

50% in Year 2.   This reduces complexity, which increases predictability, and really represents the type of deal that everyone has been figuring on all along.  Historically (with the notable exception of the “rollback” provision of the last CBA), existing contracts have been “granfathered” into new CBA deals, and it is doubtful that the players will accept a precedent-setting departure from that concept at this stage in the game  — particularly when it is not accompanied by a fundamental structural change, as it was in 2004-05. It’s an old adage that a good settlement is one in which both sides walk away grumbling.  The NHL owners won’t like taking the Year 1 hit on the contracts, and the NHLPA won’t like going directly to 50/50 in Year 2, but that’s how deals are made.

The fundamental flaw in all of this is that both the NHLPA and NHL are looking at short term issues to solve long term problems.  50/50 is an improvement, but not without structural changes that are unlikely to be addressed in this iteration of the CBA.  As noted above, the 50/50 concept works fine at the NHL level, but not so much at the individual club level.  There is a vast discrepancy between the “haves” and the “have nots” in the NHL, so any formula premised upon some mythical notion of identity of interest is doomed to ultimate failure.  Foremost among these concepts is the notion of the cap floor.  Well, truth be told, it’s not the concept of the floor that is the problem, but rather the execution. With the cap (and the floor) escalating at an 80% clip over the term of the last CBA, and a relatively narrow gap between the cap and the floor (about $750,000 per roster player), the majority of the teams have been forced into economic neighborhoods where they simply cannot afford to live.  If it was one or two clubs, that would be one thing, but the vast majority of clubs have struggled under the salary cap, and it is due mostly to the floor.  Eliminate the floor (or significantly lower it) and keep the cap.  This would allow for more of a “free market” for the bulk of players who fall short of superstar status, but have earned a one-way contract.   Teams would retain the flexibility to create greater differentiation between players of different abilities, and would not be forced to overvalue some players, which the floor effectively does.  This problem is magnified by the arbitration system, which creates an economic “leap frog” game, defining market prices for other players supposedly situated in the same ability tier.  Safeguards desired by the top echelon of teams who fund revenue sharing can be built into the revenue sharing mechanism, or simply be addressed by a lower floor.

There are other fundamental issues that need to be addressed by a league that does not have the benefit of a massive national television deal to play with.  If the NHLPA wants to take on the cap, then expect the owners to tackle guaranteed contracts.  Both of those would be tied to the great revenue sharing debate.  Those won’t be materially addressed this time, but need to be looked at  . . .hard . . . if the NHL and the NHLPA expect to grow the game in a rational way — without losing huge blocks of games — or seasons — every 7 years.  That doesn’t help growth either.

At the end of the day,  the NHL’s move on the seemingly obvious issue of existing contracts may trigger a settlement of the existing dispute, but mask the larger issues.  The league needs to abandon the fiction that all of the teams are in the same boat, and the owners need to realize that banging their heads on the floor is causing their headaches.  Only then will the types of structural conversations be held that are necessary to the long-term health of the game.