Sergei Bobrovsky, the Florida Panthers’ $70-million goalie, is primed to shine bright like a Florida sunrise in his first season with the team. As the team’s number one goalie, the expectation is for him to lead the Panthers to a playoff berth for the first time in four years.

Bobrovsky, who turns 31 this month, has a business-like approach to solidify the team’s goaltending position. In 2018-19, Florida was near the bottom of the league, finishing 28th in goals against, giving up 280 goals.

Goal Is the Stanley Cup

After Bobrovsky signed his large contract in July, he was clear that his top priority in Florida is to win the Stanley Cup. Last season, the Panthers finished the season with 86 points, 12 points out of a playoff spot, missing the postseason for the 16th time in the past 18 seasons.

His signing, coupled with the hiring of Joel Quenneville as head coach this off-season, has quickly transformed the Panthers into a playoff contender. Should they make the playoffs, a run at the Stanley Cup, which Florida has never won, is a legitimate possibility for the first time since the days of rats flying onto the ice in south Florida.

If you missed today’s #FlaPanthers Press Conference, you can watch it here » https://t.co/zhuOC8tWjI pic.twitter.com/cwYazeGCDJ

“With the bright future this team has, with the great coach, with the great management, and with the really talented group of guys, I’m excited to be here,” Bobrovsky said back in July. “I think we can make something special here.”

The Panthers have built an outstanding core of young forwards who can score plenty of goals with the likes of Aleksander Barkov, Jonathan Huberdeau, Vincent Trocheck and Mike Hoffman. However, giving up goals has been a problem in recent years. The team has missed the playoffs three consecutive years, as it finished in the bottom half of the league in goals against each season.

Roberto Luongo and James Reimer struggled to keep the puck out of the Panthers’ net last season. They shared the bulk of the goaltending duties, however, Luongo retired in the offseason and Reimer was traded to the Carolina Hurricanes. The addition of Bobrovsky should be a significant improvement and the hope is Bobrovsky picks up where he finished 2018-19.

Bobrovsky Stellar as a Blue Jacket

The 6-foot-2, 182-pound Bobrovsky led the Columbus Blue Jackets to a shocking first-round upset of the Tampa Bay Lightning in last season’s playoffs. During the regular season, he recorded nine shutouts in posting a 37-24-1 record with a 2.58 goals-against average. 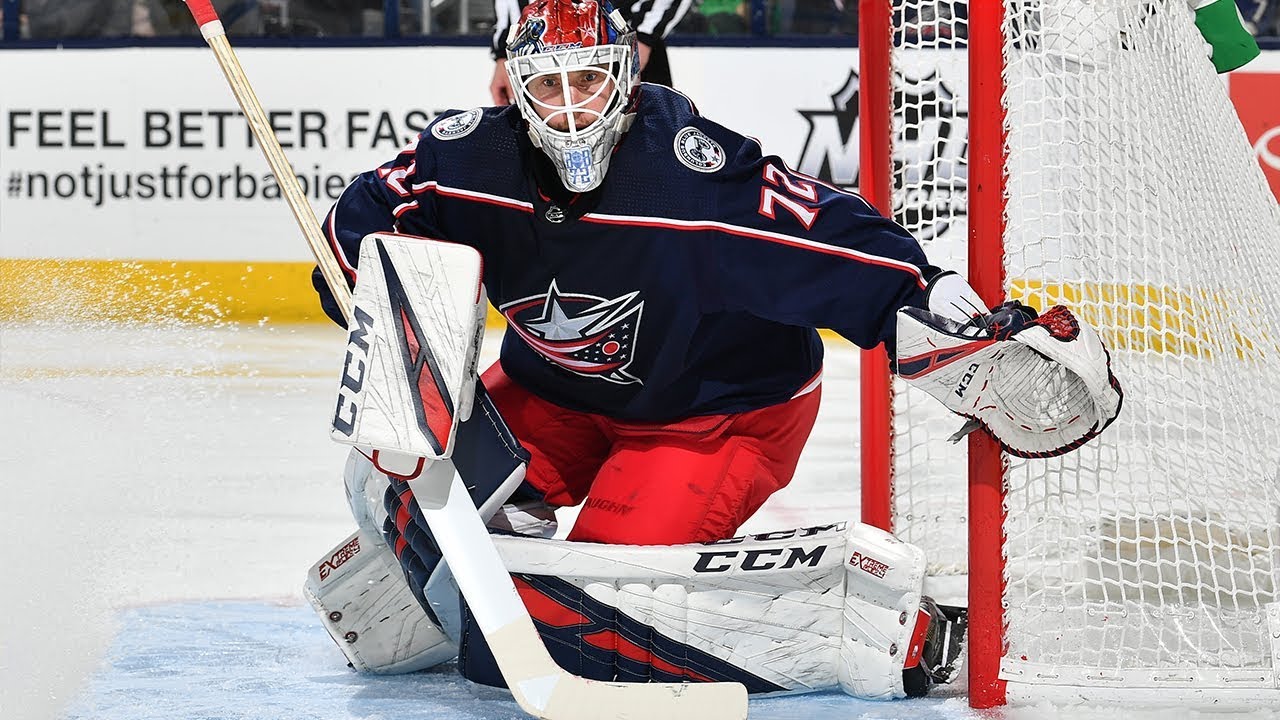 Bobrovsky spent the past seven seasons in Columbus, where he established himself as one of the best goalies in the NHL. As a Blue Jacket, he won the Vezina Trophy twice and finally removed the playoff monkey off his back by winning the Lightning series, as it was the first time he won a playoff series.

“He’s been the best goalie in the league for a while now,” said Barkov of Bobrovsky, who has an NHL-best 115 wins over the last three seasons. “We’re going to make mistakes and then the goalie has to help us and he’s the right guy to do that. We know that he’s there and he’s gonna give us a lot of confidence.”

Bobrovsky has averaged over 60 starts the past three seasons and this season the expectation is for a similar number of starts. This year’s training camp has already given his teammates a glimpse into what he adds to the team.

“I think he brings a calmness,” said veteran defenseman Keith Yandle. “Obviously we haven’t been around him too much, but you see him in the gym, he’s working out, he’s doing his thing. He’s a guy that’s prepared. He knows what he’s doing, he’s going to do his job.”

There is plenty of pressure on Bobrovsky to stop pucks as validation for his seven-year, $70 million contract. Plus, the Panthers don’t have a backup goalie with significant NHL experience. The four other goalies in camp competing to be the backup, have just 14 total NHL games combined, so despite that pressure, he is excited to start the upcoming season after the eventful off-season.

“It’s fun to be around the guys,” Bobrovsky said. “It’s nice to get started and build up relationships and get back to work.”

I have followed the NHL since the early 1980s, when offense was king. I lived in the midwest until 2013, when I relocated to south Florida.