With the 2015 NHL Draft now less than two weeks away, teams are in full swing as they prepare their draft boards and start to formulate plans for improving their respective hockey clubs. In Philadelphia, much has been debated over what the team will do with the seventh overall pick. Names such as Ivan Provorov, Mikko Rantanen, Lawson Crouse, Mathew Barzal and Pavel Zacha have been thrown around. While there is a good chance one of those prospects could end up in orange and black, it will remain to be seen who will join them a few hours later with the 29th or 30th pick that was acquired from Tampa Bay in the Braydon Coburn deal. With the depth of this draft rivaling that of 2003, there will be a plethora of options for General Manager Ron Hextall and his crew. Let’s look at three prospects that may be good fits in the City of Brotherly Love.

DeBrusk is currently the 19th best North American skater by NHL Central Scouting after posting a monster season with the Swift Current Broncos in the Western Hockey League. In 72 games, he scored 42 goals and added 39 helpers for 81 points and finished with a minus-nine rating. Although he doesn’t mind getting physical when necessary, his game is vastly different than that of his father, Louie DeBrusk, who was known more for his fists after racking up over 1100 penalty minutes in just over 400 NHL games. This past season was a coming out party of sorts for the younger DeBrusk as he only scored 15 times and totaled 39 points in 72 games the year prior, his first with the Broncos.

What scouts love the most is his natural goal-scoring ability. At times, he is very fleet of foot and when given space, he makes it almost impossible to knock away from the puck. Add in his attention to the back-check and you’ll discover he is quite the two-way player most teams would covet. He  resembles a player like Los Angeles Kings forward Tyler Toffoli, one obvious reason why Hextall should give him a look IF he is still on the board. He was in high demand at the combine and made quite the impression.

The Flyers have been in the market for left wing depth for some time. If he is still on the board, he could be part of an eventual solution.

Like DeBrusk, Beauvillier is another dynamic forward who had a breakout sophomore season after recording just 33 points in 64 games for Shawinigan in 2013-14. This past season, he notched 42 goals and 52 assists for 94 points and a plus-16 rating in 67 games. Don’t let his stature fool you; at only 5-10 and around 180 pounds, the kid can play. His top attribute is that he has a knack for setting up teammates just as much as he does for hitting the twine himself. He is not as good of a two-way player such as DeBrusk, but he is likely faster.

In terms of size and positioning, he can be compared to a player like Brendan Gallagher of the Montreal Canadians. While that may not seem overly enticing considering the fact that Gallagher was a fifth-round pick, he has managed to average around 20 goals and 50 points per season while skating on a top line with one of the Eastern Conference’s premier teams. The comparison is more-so for size as Beauvillier has a much greater skill set and his raw talent is superior.

Officially, Beauvilier is ranked the 33rd best North American skater by NHL Central Scouting. While that may seem to place him as a suitable second-round pick on paper, his talent and offensive prowess could make him attractive towards the end of the first round when teams realize that he likely won’t be around when they pick again. Hextall has preached patience with his skilled younger players and prospects; Beauvillier would certainly fit that mold. 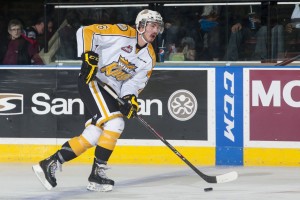 Odds are if somebody mentions a defenseman from the Brandon Wheat Kings while discussing the 2015 NHL Draft, they are likely talking about Ivan Provorov. With Provorov expected to be gone within the first 10 picks, defensive partner Ryan Pilon will be the next relevant Wheat King to discuss. The 6-2, 2, 207 pound blueliner scored 11 goals and dished out 41 helpers for 52 points and a plus-36 rating in 68 games. Like Provorov, Pilon had an impressive postseason run with 12 points in 19 games.

The Prince Albert native is considered a two-way defenseman with a quick release and a strong head on his shoulders in all three zones. He plays well on special teams and his reach and speed make it hard to beat him. There is quite the disparity on where he should be drafted with NHL Central Scouting ranking him the 24th best North American skater while other outlets have him less-positively ranked such as TSN who has him listed as 55th and Craig Button who labeled him the 51st best prospect. Even so, Button opined:

“Ryan is a very efficient, effective player who plays with assuredness. He doesn’t panic or get overwhelmed with the pressures facing him in the game and has a steadying calm to his play.  He makes the necessary plays and doesn’t force things. A player who can complement a real high-end offensive type”

With other defensemen potentially in the mix such as Brandon Carlo and Noah Juulsen, it would appear to be a stretch for the Flyers take him in the first round. It’s worth noting, however, that it was said they stretched with Samuel Morin in 2013 and then again with Travis Sanheim in 2014. The Flyers have always concerned themselves with how a player would project into their culture, not how he would project on paper. Pilon likely isn’t the player the Flyers faithful would want picked in this position, but he still will likely be on their board.

Of course, the above three scenarios will all be for naught if the Flyers decide to the package the pick and move up. With the Coyotes and Maple Leafs dangling the third and fourth overall picks, how could one not at least take a shot with this draft class? Time will certainly tell, but either way, the Flyers will come away from the first round with a potential game-changer or two.